Three weeks ago, club members hiked the Blue Diamond Canyon #1 Loop. Today, we hiked the next two canyons to the west appropriately named Canyons #2 and #3. This scramble hike found across SR 159 from Blue Diamond has been in the club's repertoire for many years; first taught to me by Guy Galante and Howard Gray. Back in the old days, we used to bring along a strap for a climbing aide. Nowadays, we just scramble up without it on the four major dry falls hidden in the two canyons. Today, sixteen club members arrived at the gate in front of the utility building that is seen across from Blue Diamond on a little hill. As usual, we were careful to park on the sides of the driveway so we wouldn't block anyone. And, in fact, as we were gathering, a cable guy van unlocked and entered the gate. We happily walked right through to start our hike. If the gate had been closed, the fence can be easily passed through. The fence is there to control the burros.

We hiked up the hill behind the building then dropped into Canyon #2. We chose to drop in where the canyon "wall" is very easily sloped. The second option is a little further up; a trail that leads down a sharper slope. Either entrance then requires a bit of hiking in the boulders and around honeysuckle mesquites (Catclaws).

Note: The brush in both canyons has grown. Oftentimes, we had to dodge everything from catclaws to chollas that were reaching out to touch someone right in the middle of the pathways.


After the initial struggle through the lower wash, we came to the first dry fall, a slippery sloped but climbable solid rock slide. The bee's nest that used to be here has been gone now for a couple of years. The character of the canyon comes alive at the top of this fall. Solid rock floors and barrel cacti in the walls join in on an adventure up several stair-stepping rises. The next dry fall is the first of the four major ones. It has a rope that has been bolted into the top of the climb for years and years. Today, it seemed to be well-maintained. A foothold shelf in the abyss under the bolted rope about half way up the climb helped each of us to gain the top. Mike and Tony were very helpful at the top and the bottom to make sure the smaller hikers were able to make the scramble's reach.

Following this, there were a few stair-stepping climbs we scrambled right up. The pace accommodated the group with a stop now and then for a drink of water. In spite of the cold morning that dipped into the low 30's, we needed water breaks for our effort.

The lull of the constant sloped climbing and the concentration on the best path to take, was interrupted many times by the beautiful scenery of the high-walled canyon and the view of Mt. Potosi in the canyon "V" when we looked back.


Finally, the canyon widened temporarily. This was an indication that the second major dry fall was upon us. There is a go around trail here if you go straight. However, if you go along the wash to the right, you come to a mere 5 foot dry fall that requires some skill to ascend. Totally doable! With Mike and Tony spotting again, each hiker made the climb and I don't think anyone took the go around trail. Good job! Tony later spotted a nice grouping of seabed fossils to the west of this dry fall. There are individual Precambrian fossils that you can see in the rock of the floor and boulders all the way up the canyon. Coral, sponges, shells ... amazing!

The next major dry fall wasn't too far away. This last one in Canyon #2 is a narrow opening and must be climb either on the right or left side. The left side is fairly straight forward but, if you know the choreography, the right side is easier. Right foot on a smooth ledge on the wall below; right hand on a handhold on the corner above; then, left foot on a sharp ledge that sticks out from the dry fall. Then, up you go!

The canyon begins widening slowly then the gypsum mine tailings appear (an unusual natural phenomenon that I cannot explain) high up on the hill to the right. (Accentuated by a very large tire on the ground next to the wash. Another unexplainable occurrence.) We never did see the resident owl.


At the large tire, turn left and climb the hill until you reach a cross trail. Today, the trail was washed out and not easily discernible. A left turn on the trail brought us around the hill until we turned down into the top of Canyon #3. A peninsula at the top of this wash is a great place for a snack, in the sun and out of the wind. Next, we headed down into the canyon before us. This canyon is a little different in that the high walls don't start until about half way down. There are still several stair-stepping drops that keep things interesting. After a particularly interesting drop that several hikers participated in while the others went around, we came to the tour de force! The fourth and last major dry fall. An 8-9 foot drop! Of course, Guy and Howard would always pull out a strap for this and we would all have fun watching each other get down the drop! Without a strap, one way to do the drop can be done riskily on the left side.

But, the best way is to go partially down on the right side after someone else (!) has gotten all the way down and use their help to make the rest of the jump drop. This is how four or five hikers got down while the remaining hikers did the up and around on the right wall. Fun!

There are a few more stair-stepping drops after this. Each one different from the last. Watch for the rock nettle (velcro)! They are everywhere in these two canyons! Also, in the spring, watch for rattlesnakes! We saw a baby rattler one time in this area.


We descended all the dry falls with their peculiarities and it seems I caught a rock nettle somewhere! Then, the wash flattened out with some boulder hopping. There is a trail that occasionally appears on the left side. Sometimes the trail helps. Other times it just takes you into more brush. Best advice is to stay in or near the wash as long as possible until you come to a barely discernible three foot climb out of the wash on the left side. (See photo at bottom.) This is a game trail that is also used by hikers to follow the wash down a little further then it starts crossing over to the left where you find the trailhead. The last large wash that you have to cross to get back up to the gate has a trail located at a short full tree. The trail across the wash brings you back up to the gate; then help each other get through the fence just beyond the gate. Always a winner! Not too hard. Not too easy. And, always fun! Great group today! 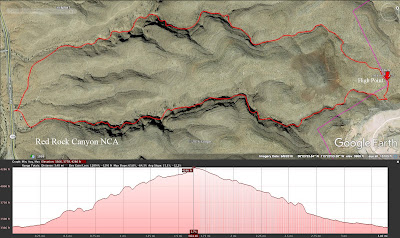 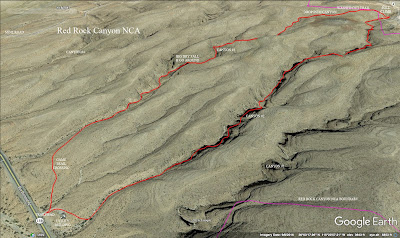 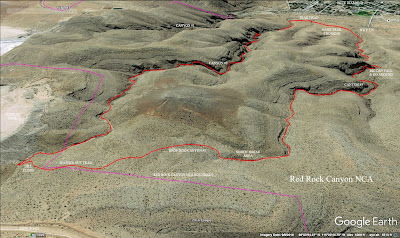 Posted by Kay Blackwell at 9:33 AM