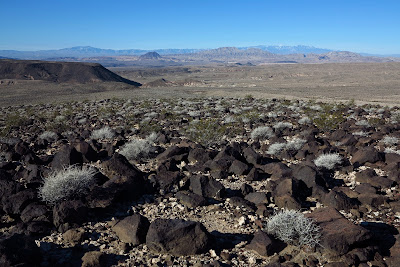 View From Callville Ridge to Lava Butte and Mt. Charleston 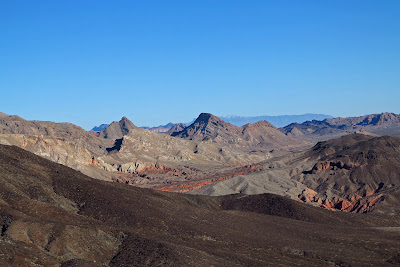 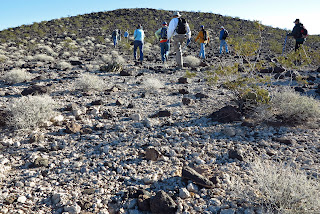 Callville Ridge (aka Ton O' Rocks Ridge) was the focus of our hike today. Nineteen hikers started out from a pullout parking area a quarter mile down Callville Bay Road which turns off toward Lake Mead from Northshore Road at mile marker eleven. It was a very chilly morning but the wind subsided quickly and the sun warmed things up a little. It wasn't until we began a quick pace up the hill to the ridge line, that we all began shedding layers. 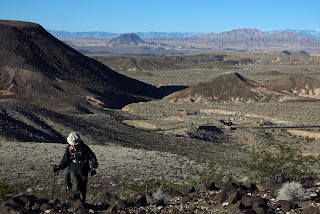 After we crossed the two foot tall tortoise fence, we were immediately introduced to the challenge du jour ... rocks, rocks, and more rocks. The ridge was covered with a layer of black volcanic rock scattered on top of gnarly dirt rocks. Our eyes had to be constantly watching where we were stepping. Our concentration had to be constantly working to prevent injury. 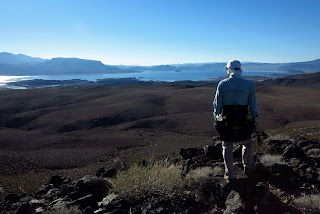 Fortunately, our hike leader of the day, Chuck, stopped frequently so that we could take in the beautiful view of Callville Bay on Lake Mead not far below us. We dealt with the rocky ridge until we reached the high point that is covered with the lava rocks. From there, we found a game trail that took us over to an old rock covered dirt road that was built to service the plane crash site that happened in 1950. 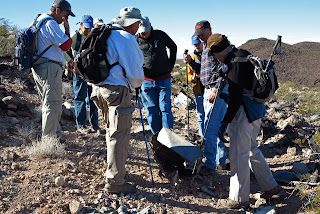 After climbing up the old road, we found that there wasn't a whole lot left of the plane at the crash site. Just a few pieces of metal lined with rivets. We finished climbing the hill and found a large cairn marking our snack spot of the morning. There was plenty of natural seating (rocks) that we used to sit and observe a gorgeous view of the lake while we rested. 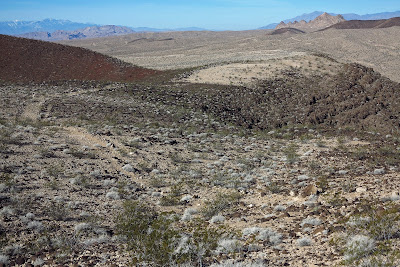 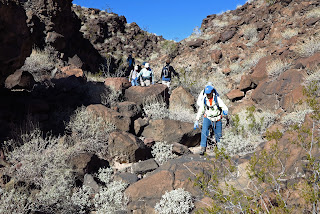 After our break, we went back down the old road and entered a ... rocky ... wash. The wash was somewhat of a relief from the ridge rocks since there was also sand and solid conglomerate rock dry falls. The down wash was mostly filled with black lava type rock then we junctioned with another wash that took us back up. The second wash was also black but had some limestone thrown in, too. 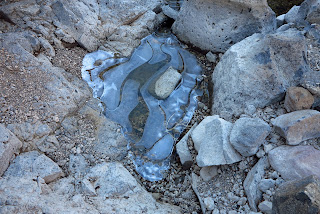 At the top of the up wash, we climbed back up to Callville Ridge and junctioned with our ascent route. We turned left and followed the ridge back down to the cars. The hike was quite a workout for all balance muscles. We were all very tired at the end and will have nightmares about rocks tonight! The hike was 6 miles with 1364 total gain of elevation feet. 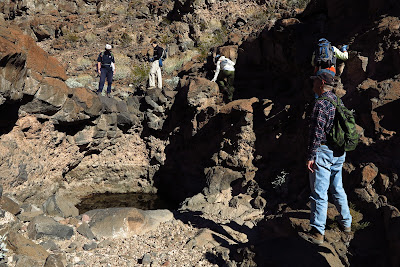 Dodging Tinajas in the Up Wash 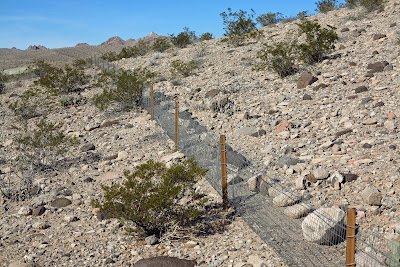 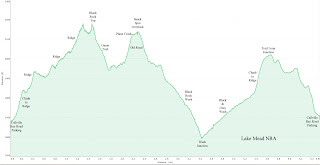 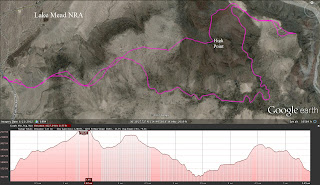 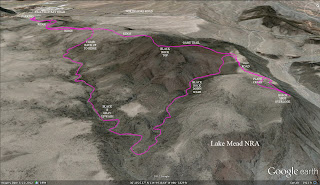