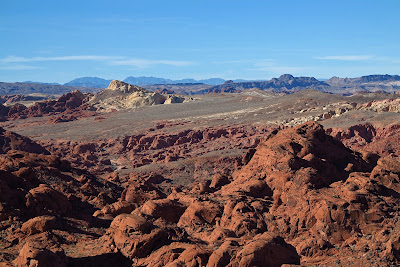 Silica Dome from Phase III of the Hike 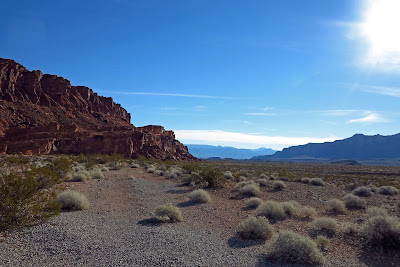 Cold Morning Sun on the Valley of Fire Plateau 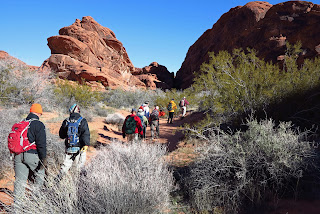 This was Super Duper Tuesday as fifteen Around the Bend Friends bundled up to face the sub-freezing temperatures of the morning at Valley of Fire State Park, an hour drive north from Las Vegas. Today's adventure would be a five hour traverse across the park going from the west side to the east side. It was a true test of stamina as most of us were taxed to our max with a blistering pace over rocks, through washes, up the sandstone, down the sandstone, and very few breaks. Brian, our drill sergeant du jour, was in the lead ... GPS in hand. 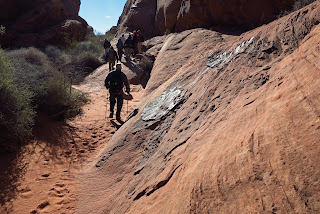 Immediately following the hike, Brian sent out an email (seen below) with a comment and the statistics of the day.


Just to let you know, 15 people braved the dire cold weather forecast for a great day of hiking at the Valley of Fire.  I was only cold for the first 30 minutes and warm for the rest of the hike.  Larry even had to find shade at lunch break because he was so hot.  We all shed clothing like crazy.  Laszlo was in a T-shirt in less than an hour.  I sweated buckets because I kept my jacket on.
Here are my numbers for those who came: Distance 8.4 miles, max elevation 2412, gross gain 1805, overall speed 1.6 mph, moving speed 2.1 mph. Total time was 5 h 17 minutes including a total of 1h 14m stopped (for me).
Everyone was tired at the end, because eight and a half miles out there is like 12-15 of a ‘normal’ hike…but as someone said “It’s a good tired”. 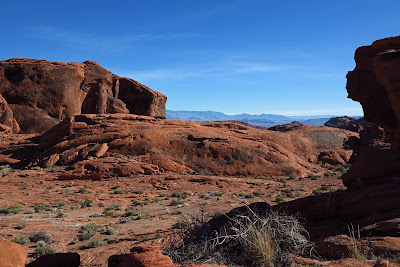 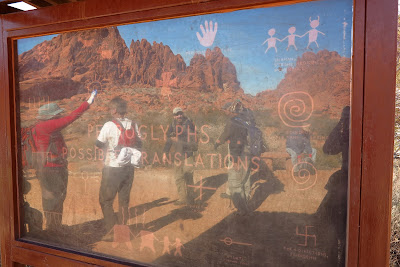 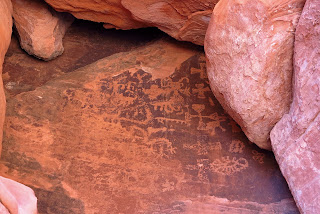 The hike started with a required shuffling of cars since it was a point to point traverse. We began our journey at the Prospect Trail parking area and quickly warmed up as we hiked to the plateau and surmounted the red rock. Phase I of the hike followed in conjunction with part of the West / East Loop hike. Then we began zigzagging a bit through the canyons as many of them were laid out in a north / south orientation. 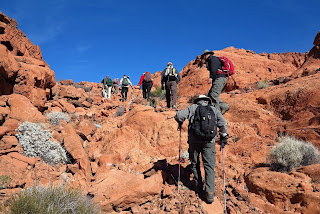 By the time we reached the Valley of Fire Scenic Drive 4 miles into the hike, we had shed at least one layer of clothing. The exertion and lack of wind inside the canyons, increased our body temperature dramatically. We came to the paved road just south of the Mouse's Tank parking area, walked up the road and took a short break at the pit toilets there. The hike continued on the Mouse's Tank trail where we stopped to take photos of one panel of petroglyphs. 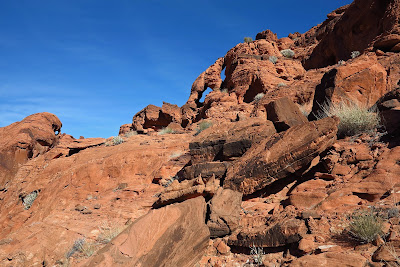 Double Arch Seen Along the Way 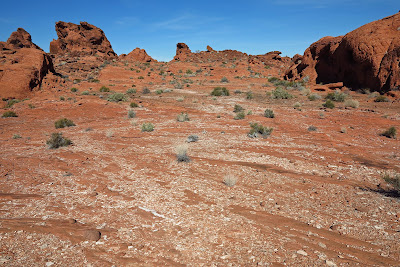 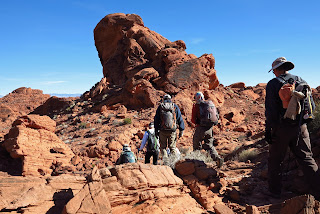 It was at this point that it seemed to Brian that we were "dawdling" so he shifted into "2nd gear." The glove had been thrown and the challenge had been taken by the fourteen followers. Off we went at breakneck speed .... Passing the double arch seen in a photo above, Brian let us know when exactly was the place to take a good photo of it so we wouldn't waste time searching for the right angle. He was right. Snap. 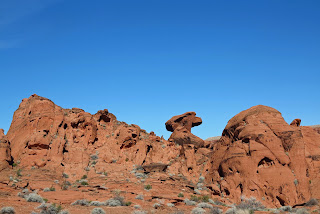 Up, down, through, over. Not sure what the scenery was most of the time. It was not a day for gazing at the natural beauty of the park. It was a day for testing yourself; your concentration, your strength, your determination, your stamina and your joints. At break time, we were deep into Phase II of the hike. This phase trekked through a hike called Beyond Mouse's Tank. 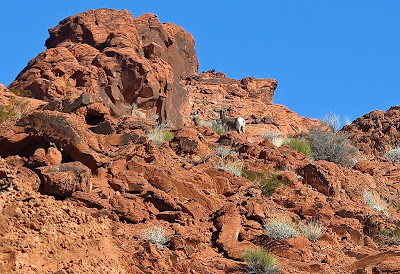 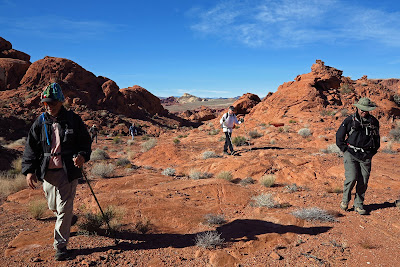 Pushing the Remaining Ounces of Energy into Our Feet and Legs 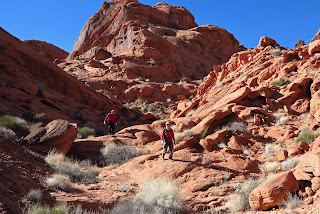 We dropped into the Valley of Fire wash, a wide sandy wash that flows through the main part of the park. Here, we began Phase III, the conjunction of the Extended Sitting Elephant Loop or known to this website as the Valley of Fire Scramble. It wasn't long before the front of the line was yelling for photographers near the end of the line to hurry up! On the sandstone hill way above us, there were three bighorn sheep ...  females. A photo was grabbed and magnified. Yep, got 'em! 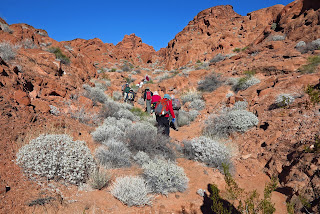 Running still and barely keeping up, we finished the hike with a few more climbs. These climbs had nasty descents at a time when many of us were very tired. Our feet and legs were not responding as well as when we were fresh. Nevertheless, we made it down to the cars and did the car shuffle thing again. The temperature had reached a balmy 43 degrees. The cold snap had come and gone. The Around the Bend Friends suggest the cure for freezing weather is a nice long brisk hike. Thanks, Brian! 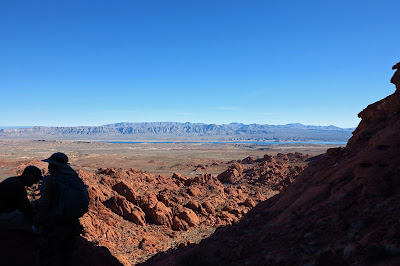 With Cars in Sight, We are Almost There 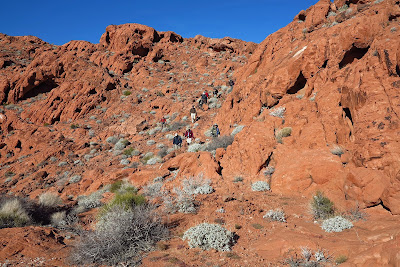 One More Descent - Easy Does It! 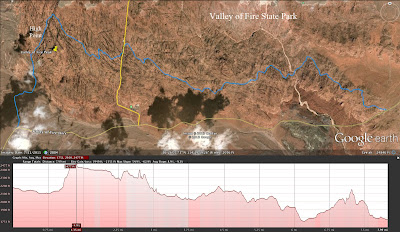 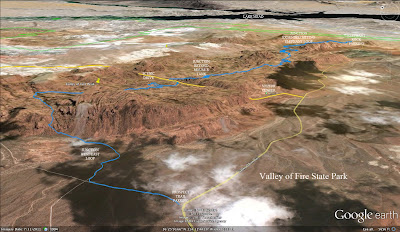 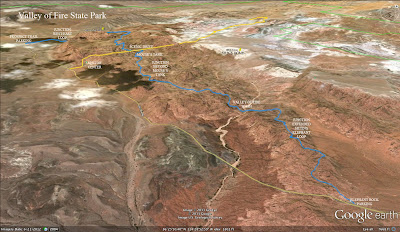 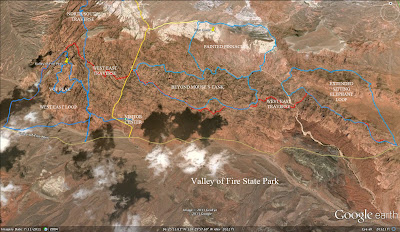 This old hiker enjoyed your Valley of Fire