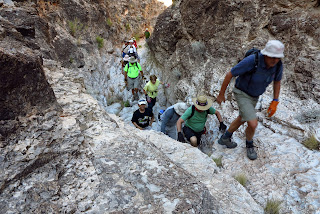 There were twenty-two hikers on today's adventure into Blue Diamond Canyons 2 & 3. It was a warm day and we were looking for the coolest hike in Red Rock. We found it in the shade of the canyons located across Highway 159 from Blue Diamond, Nevada. It was a 4 mile scramble with 1100 feet of total elevation gain. We parked several cars in the brush at the small utility building and went through the gate. Making sure that we closed the gate behind us, we headed over to the right and dropped down into the large canyon named Blue Diamond Canyon #2. 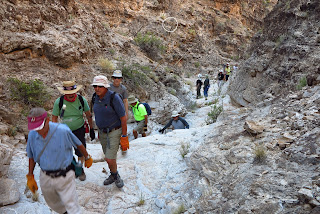 This canyon requires hikers to be very careful of their footing. It is a rocky wash with a lot of catclaws bushes. Getting deeper into the canyon, we came upon the first level changing waterfall. To the left of this dry fall, there was a bee hive in the rock wall. The hum of the bees was very loud and we climbed this fall quickly. After this, we were hiking up canyon and someone spotted an owl only twenty feet away from us up on the right. He/She just sat there and stared at us with its big eyes as we stood there and stared back. The photo to the left shows where the owl was in relation to our hiking route. 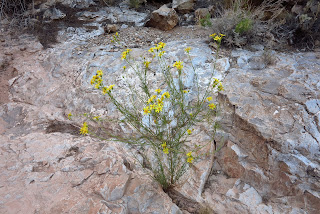 Next came the first major dry waterfall where someone from long ago had attached a rope. The rope is too low to really help much but we all got up the rock cliff fairly easy. There were several more dry falls to come. None of the rest of them had ropes but, with a little ingenuity, they were all climbable. The photo below shows the last dry fall that required some of that creative perseverance.

The yellow flowers shown in the photo to the left were growing throughout the canyon seemingly directly out of the rock floor. We also saw fruits on a mojave yucca and a joshua tree. And, we noted many many sea bed fossils in the canyon floor. 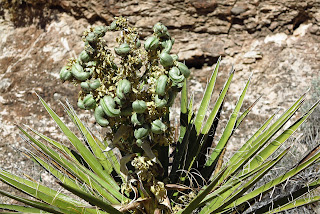 At the end of Canyon #2, we saw the tailings pile from the gypsum mining operation up to our right. We climbed out of the canyon to the left and found a small trail that led over near the top of Canyon #3. Going off trail, we found the canyon and began dropping into the wash immediately. This canyon was not in the shade as much as the previous one so we continued down until we found a sliver of shade for our snack break. 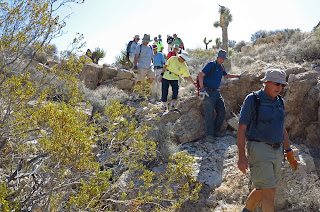 After the break, the canyon gave us the best that it had with two major dry falls and one twelve footer. Half of the group chose to go up and over on a trail while the rest of the group took their chances at the precarious twelve foot drop. All made it down alive and we continued down canyon dealing with more and more catclaws and other brush. Besides the owl and the bee hive, hikers on this outing saw a non-poisonous snake, a horny toad, a bunny and many large collared lizards. Spring has sprung at Red Rock Canyon. The heat began searing our skin as we finished Canyon #3 and crossed over to the cars. Time for an elevation change. Next week, we begin our Spring Mountain NRA season. 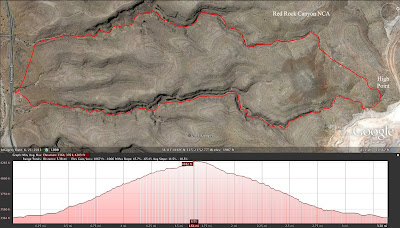 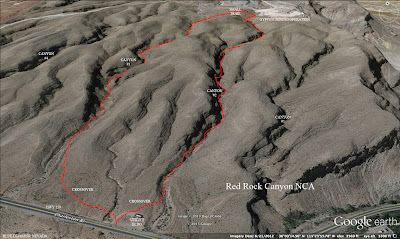