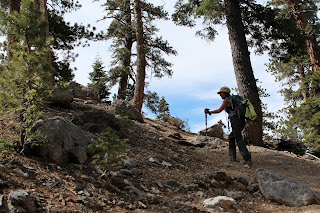 There were a whopping nineteen hikers on today's "A Little More Super-Sized" Tuesday hike to Raintree using the Trail Canyon / North Loop route. For many of us, this was our first venture up Trail Canyon this year. The bugger is 2.25 miles with 1500 feet of elevation gain. Every year, this trail is a repeating challenge, however, many of today's hikers made quick work of the climb. The pace for the whole ascent was relentless with the only group break at the saddle where Trail Canyon and North Loop junction. 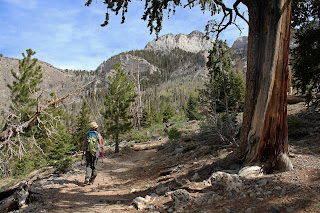 After taking our breather at the saddle, we started the North Loop over the saddle straight ahead. This section of trail is the most beautiful of today's hike as it travels around the base of Mummy Mountain up to the left. The limestone mountain above dwarfed our size as we hiked among the views of Charleston Peak, Cockscomb Peak, Fletcher Peak and Mummy's Toe. We encountered a pleasant relatively flat half mile before we began another mile of strong ascent. 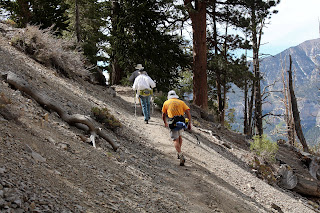 After hitting an "altitude wall" at 9700 elevation feet, the writer straggled up to the old tree after the snack break was well underway. As one hiker said, we missed our old friend, "Raintree." Looking strong and healthy, the tree stood next to us as we all found places on the surrounding logs to sit. We laughed about the tough pace that was set today. We were all working on regaining our fitness levels for the Spring Mountains season. Nevertheless, we did a darn good job at tearing up the trail! 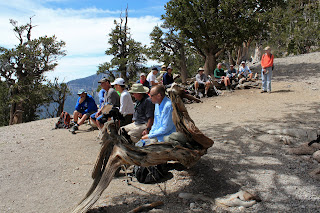 It got a little cool up at the 9900 foot level so we ended our break and began the descent. Most of us were working two hiking sticks and the descent went quickly and painlessly. When we returned to the saddle, we picked up one hiker who just came for the Trail Canyon portion of the hike and continued down to the cars. There may have been one minute of break at the saddle on the descent. Otherwise, we returned to the cars without stopping. The total hike was 7.5 miles with 2288 feet of elevation gain. 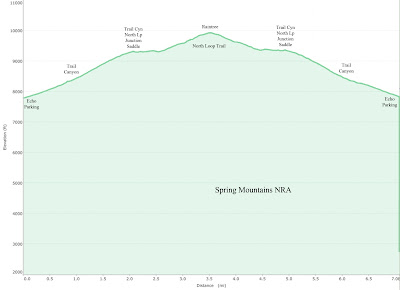 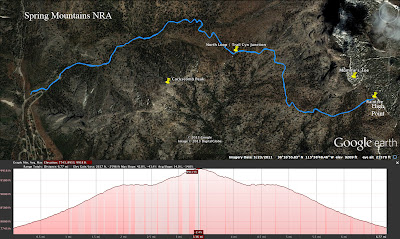 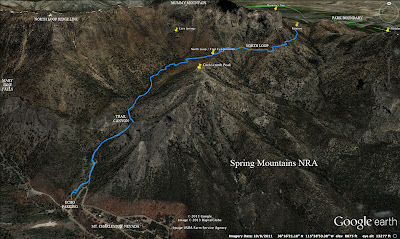