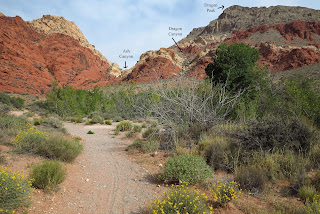 Twenty hikers arrived at the Calico Basin dirt parking lot in Red Rock Canyon NCA this morning for a 5 mile loop hike beginning up through Dragon Canyon and ending by coming down through Gateway Canyon. The photo to the left shows where Dragon Canyon is located in relation to Ash Canyon. It is situated within the confines of Dragon Peak (aka New Peak) and runs parallel to the well-known Ash Canyon. 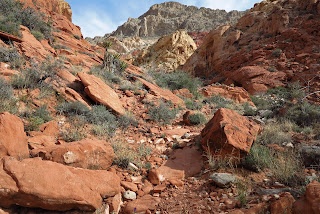 We hiked up the dirt road then dropped into Ash Meadows where we continued up toward the base of Ash Canyon. Before we got all the way to Ash Canyon, we turned off to the right and found a small trail that led up to the base of Dragon Canyon. Our first view of this colorful canyon is in the photo to the left. The scrambling began immediately thereafter as we met red then white sandstone and a steep wash filled with small limestone boulders. 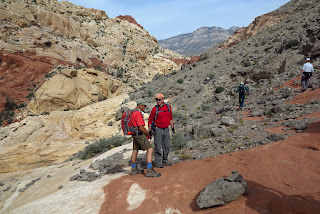 As we neared the top of the wash, half of us turned off to the left and found Ash Canyon below us. The other half continued climbing the wash and ended halfway up to the peak. All hikers except for three gathered to hike the trail down to junction with the Ash Canyon trail. The other three stayed high and enjoyed a scree filled game trail. As we neared the top of Ash Canyon, three hikers broke off to scramble up the wash. All twenty hikers gathered again at the top of Ash Canyon Overlook for a snack break. 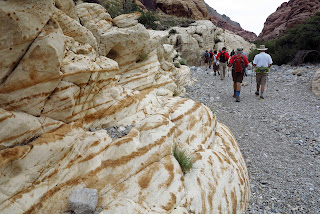 The sky was filled with light smoke from a California forest fire so the sun's rays were held back and we were enjoying a light breeze. After our color filled break, we continued down Connector Canyon to the Gateway Canyon entrance between Upper and Lower Gateway. Here, we turned right finding a lot of gravel to slog through as the colors changed and began filling our eyes with red, white, and yellow again. 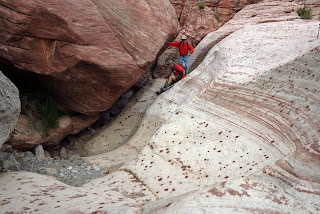 As we descended through the beautiful canyon, we saw that the wash was very low in many key places. This made it necessary for us to find new ways down through a few of the larger obstacles. For instance, to the left, there is a photo where the gravel used to reach up around three more feet. Today, we had to slide down a couple of places where we used to simply step down. Gateway Canyon is one of the more dynamic canyons in Red Rock.

Coming out of the canyon, we followed the well-trod trail around the east end of Krafft Mountain and through the boulder field where rock climbers like to hone their skills. Total elevation gain was 992 feet. 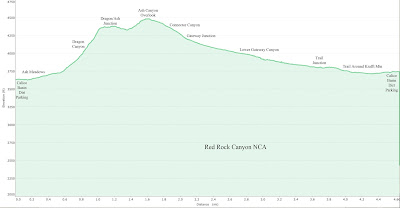 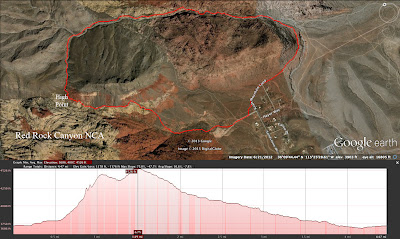 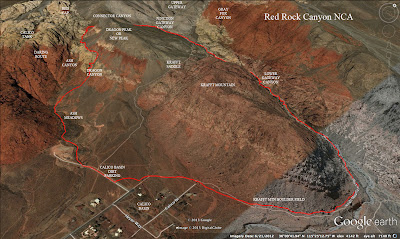 WOW ! I sure wish i had found this group last week. Darnitall. Just left the RR/Vegas area yesterday but got some good hikes in while i was there. I hate to do it alone though and am looking for a group when i am out there. I hope i can hook up with You next time. Your hikes and reports are really incredible ! I did a hike at Pine Creek Tr and followed a canyon back for awhile last Thursday. I think it might be the South side of Mescalito. Any chance anyone can tell me where i was :)) or the name of the canyon ? Here is my Garmin link :

Hi Linda, You were very near Terrace Canyon until you missed the last left fork. K

Ha. Yes ! i just looked at a previous group hike that was Terraces and it looked very familiar . And i LMAO at the comment about it being more of a challenge for short folks. i found that to be the case also :) I really hope I can join the group next time out. I have done quite a few of the hikes on the blog - RR, Mt Charleston etc .. I am enjoying looking at the photos and routes. ThanK YOu for your reply !