Four Around the Bend Friends hikers finally got the Bridge Mountain expedition underway on Wednesday. This was an expedition specifically for enabling Jim Boone to document the trail for his popular website "Bird and Hike." (There is a link for his website on the right side of this page.) Susan M. led the adventure and Jim Boone drove his trusty little jeep up Rocky Gap Road so this left room for two more hikers, Larry D. and Kay.

The adventure began, of course, on the one hour drive up the 4WD very high clearance road. The road is not in very good condition but with the short wheel span of Jim's hardy jeep, we made it up to Red Rock Summit pass just fine. Two noted road conditions included very narrow passages and washed out bed rock. We wondered when this road was ever in "good condition!"


We hiked up the limestone and juniper filled trail in the Rainbow Wilderness that began to the south of the pass where we parked. After one mile of climbing, we junctioned with the North Peak (Limestone) trail at the ridge. The Bridge Mountain trail now went down to the right.


Just past the junction, we got our first view of Bridge Mountain rising up like a big yellow crown. Behind it, we could see the colorful sight of the Calico Hills.

The trail led south before turning to the left and heading down onto a bench that would eventually lead out to the base of the peak. The limestone turned to red sandstone then yellow sandstone. At this geologic line, we hiked directly to a very high cliff that overlooked Fern Canyon below. We could see the ridge that connected Mescalito Peak to the world and beyond that, Rainbow Peak, Rainbow Wall, Gunsight Peak and Juniper Peak.

After a short break, we began the business of descending the sandstone down the bench to reach the base of Bridge Mountain Peak proper. On the sandstone, it was necessary to follow cairns as the "trail" went from tricky descent to twists and turns to more tricky descent. Unfortunately, someone felt the need to paint arrows and path marks on the rock to help in the navigation. Gone are the days of George when the trail simply led from weathered tree to weathered tree.

As the descent on the bench became steeper and more tricky, hiking sticks were either stowed or placed aside. The hike had become an absolutely hands on deal.

Above, you see the finale chute down climb. Jim seems perched to attack the tiny hand holds and foot holds that are offered. From here, we crossed the last narrow sandstone passage between Ice Box Canyon and Fern Canyon far below, to the peak base.


One more breather and we were climbing straight up the crack and beehive sandstone in front of us. This climb is probably at near a 60 degree pitch, at least. It seems to go on for a long time but it may be only fifty feet long at most. When the climb levels off a tad, hikers must step over the adjacent crack onto a ledge of about 5 or 6 feet in width. The ledge can be seen in the photo to the left. While we gathered on the ledge, we watched a helicopter far below us practicing maneuvers above Mescalito Peak.

Again, turning right to go up, there is another bit of beehive climbing until you reach a mere 45 degree pitch on a ramp (seen to the right) that approaches a large bridge. The bridge is the opening of a large "well" inside which stands a large leaning pine tree. Another smaller pine tree is also growing there. We took in the scenery then began our climb up the wall that the old pine tree leans on.

At the top of this 20 foot wall, we came out to a wide open level. The right side of this level drops down to an area of pine trees that is affectionately called the Hidden Forest.

The trail circles around the near end of the forest of pines and begins climbing again; this time on a diagonal ramp that drops steeply to your left.

The photo to the left was taken by Jim as Kay and Larry climbed the last ramp in front of him.


This final climb that ends on the peak area is challenging but the views at the top make it all worth while. All four of us made it up to the top and found a place to sign into the log book. We had begun the hike at a later start time since there was some chance of snow last night and the air temperature would be in the low 30's at dawn. Our strategy paid off. The air temperature was perfect for the hike and we only passed a small patch of snow in the bridge well.

On the peak, we basked in the sun for only a short while since time was no longer on our side. The hike, so far, had lasted three hours since we needed to keep the pace moderate for Jim's documenting job. Therefore, in order to still have daylight for the drive down Rocky Gap, we needed to keep moving albeit very carefully. We reminded ourselves to keep vigilance about our steps and choices and began our hike down the peak.

Baby steps were required on the first ramp down. Then after circling the Hidden Forest, we climbed up to take a look at the very deep tinaja. There was perhaps a foot or two of water inside. Other tinajas in the area had a thin covering of ice.

The next part definitely took Kay out of her comfort zone! That 3 inch ledge that took us around to the top of the bridge is scary! The option is to go over the top and drop down to the bridge. Jim captured the scary ledge traverse in the photo above then performed the traverse like it was nothin'!

Next, we dealt with the beehive down climb very slowly and carefully then breathed a huge sigh of relief at the bottom of the peak. Crossing over to the bench climb, we tackled more scrambling and a little more exposure then we grabbed our stowed hiking sticks and took one last look at the cliffs above Fern Canyon. The cairns and paint marks were left behind and we began a tiring climb back up the bench to the limestone ridge.


Once on the limestone trail, we retraced our steps to the North Peak (Limestone) trail junction. The late afternoon sun lit up Bridge Peak with colorful vibrancy. The clear air gave way to a Las Vegas Strip view in the distance and we continued down to the trailhead. With perfect timing, we drove back into Willow Springs of Red Rock Canyon NCA just as the sun was dying on the eastern part of town. 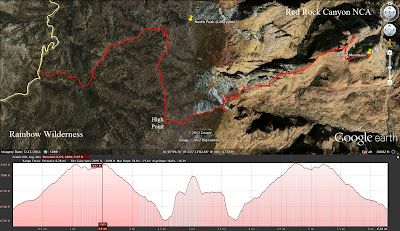 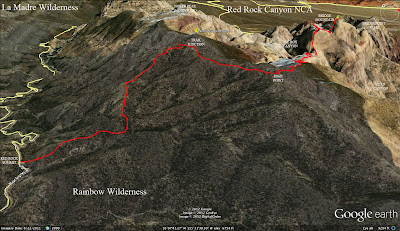 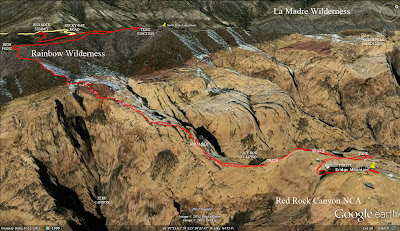 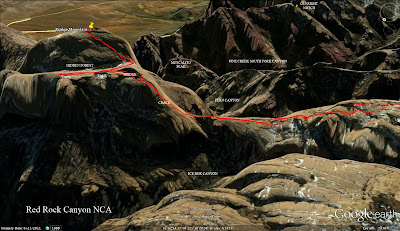 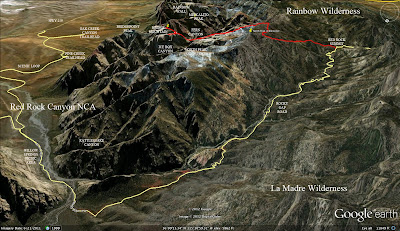