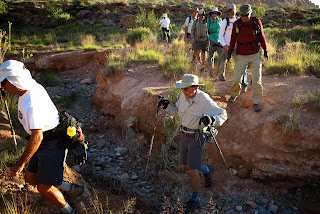 After a lot of email chatter yesterday, we surmised that our hike to Dragon Canyon in the Red Rock Canyon NCA was within legal bounds during this time of government closure. Therefore, a strong number of eighteen hikers showed up and parked in the dirt parking lot deep within the Calico Basin where there was not a locked gate nor developed park area. Our hike would not take us into the scenic loop acreage and we stayed beyond sight of it as well. 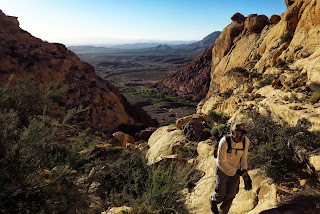 The long line of hikers followed one of the many trails that headed over to Ash Meadows and up to the entrance of Dragon Canyon, a canyon that runs parallel on the right to Ash Canyon on Dragon Peak (aka New Peak). This is a beautiful canyon with colorful sandstone and is an easier climb than the Ash Canyon scrambling. There is a trail but many of the hikers found it easier to climb up the sandstone slabs on the left side of the wash. After a decent work out while we sniffed the sweet scent of something blooming, we found ourselves at the flat sandstone area where there is a trail that continues down into Ash Canyon. 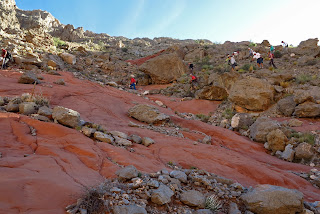 After making sure that we were all out of Dragon Canyon, we merged into Ash Canyon. Many of the hikers stayed high here and avoided the slippery exposed route of the trail but the trail was negotiable and we merged with each other at a point a little further up the canyon. Some of the hikers decided to continue their scrambling in the wash and others took the trail route up to the Ash Canyon Overlook. We gathered on the red sandstone next to Rattlesnake Trail and had our "coffee break." (It was still too early for "lunch!") 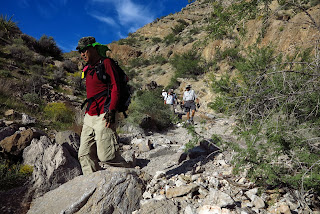 After the break, we dropped down to the Rattlesnake Trail and followed it down to Gateway Canyon. The wash was minimally washed out at the top. When we reached Gateway Canyon, we waited until everyone was together again. Our hike in the canyon gravel was short and we turned to the right when we reached the trail that led up to the Krafft Mountain Saddle. 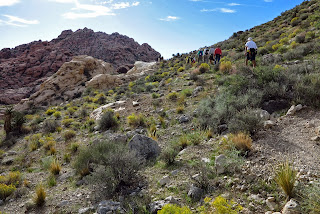 The yellow flowers were very pretty on this slope going up. At the saddle, we continued down the other side on a descent of 5 Stop Hill. Not too far from the bottom of the hill, we reached our cars which were parked and not ticketed in the Calico Basin dirt parking lot ... along with the addition of several others. There is a rumor that if you park on the road outside of Red Springs, you may be ticketed. (Who knows?) Today's hike was a little less than 4 miles with 1100 feet of elevation gain. It lasted only 3 hours including breaks. 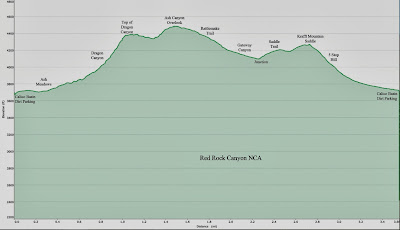 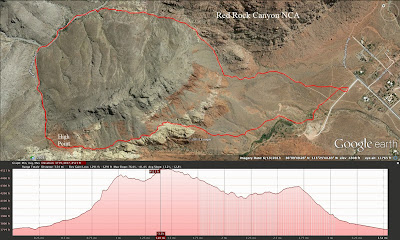 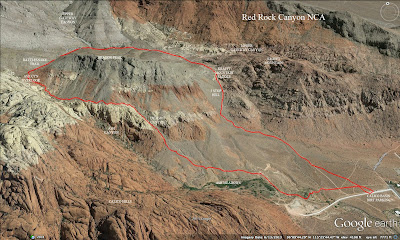 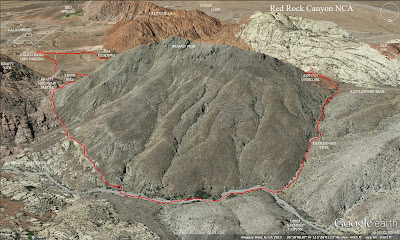