The Bird Spring Formation, found in Clark County, Nevada, preserves fossils dating back to the Carboniferous and Permian periods. (350 to 300 million years ago) Coal beds were being formed during these periods and life was evidenced by amphibians, reptiles, and anthropods (invertebrates). Beds of limestone and dolomite separated by shale and sandstone lie beneath the Bird Spring Range of today. It extends from Goodsprings on the south side up to Indian Springs on the north side. Mt. Charleston and Spring Valley (in Las Vegas) border the range on the west and east sides respectively.

The section of the Bird Spring Range lying between Goodsprings and Highway 160 is an excellent place to explore and find fossils among the chert.

Today's seventeen hikers began the popular route at the trailhead located off of the Cottonwood Valley Road, a dirt road that turns south off of Highway 160 before the climb up to Mountain Springs Summit to the west.


The dirt road down to the trailhead turnoff to the left appeared to have been recently graded and it was in good condition. We connected with the Techno Trail and climbed up into the hills. There were 360 degree views of the Red Rock escarpment, the Calico Hills, Mt. Potosi and, eventually, Las Vegas. The area feels very open. Soon, we dropped down to a saddle called Badger Pass. After a brief rest, we started up an incomplete trail that leads up the peak to our left. When we ran out of trail, we just kept climbing along the wide ridge passing desert flora and limestone / dolomite rock occasionally  covered with chert.

About midway up the ridge to the peak, we stopped on a shoulder to find a few excellent examples of anthropod fossils.

A great view of Las Vegas opened up to our left as we completed the climb up to Bird Spring Peak.


At the peak, we rested again. The cliffs of the Bird Spring Formation had appeared in front of us. A snow dusted Mt. Potosi rose majestically to the right and the valley floor dropped precipitously to our left. From here, we began a hike along the edge of the cliffs looking for fossils as we went. Fossils have stiff competition for "most exciting" when you peer down to the valley below. We found a few fossils but the exposure kept most of our attention!

There is a faint trail that takes hikers along the edge of the ridge.

Las Vegas receded behind us. When we neared the end of the immediate ridge, the front hikers saw some mule deer running away on the ridge.


We were expecting to see the deer down on the dirt road saddle junction as we reached the descent down the ridge. Instead, we saw four wild horses below. They were as surprised to see us as we were to see them. It is unusual to see the wild horses in this neck of the woods ... er, ... desert. They were beautiful. It appeared that, perhaps, the stallion was the dark colored one and his herd were all light in color. The stallion led the herd down the hill out of danger's way and he watched us closely while we hiked across the saddle, had our snack break and continued on our way along the ridge.

We had our snack break on the ridge where there is a geocache located.

The wind was light but very cold. Otherwise, the temperature was decent. ... Especially after we left the saddle area.


From the saddle, we continued along the ridge climbing up to the next peak. Someone has placed a log book container on this peak that they named Cottonwood Peak. We signed in. This high point is near to exactly the same as the Bird Spring Peak elevation. Depending on exactly where you stand on the peak. In the distance in front of us, we could see the small town of Goodsprings, NV. This little town is the gateway to the dirt roads on the south side of Mt. Potosi. It is also where Clark Gable spent weeks drowning in his beer while search crews were working on the plane crash that killed Carole Lombard, his wife, on Mt. Potosi.

We turned to our right and began a long sloping descent down to the valley floor.

At the bottom of the hill, we came to a trail lying perpendicular to our route. We turned right on this trail.


This trail soon became the Deadhorse Loop Trail as we intersected the Cottonwood Valley Road. The trail dove down and took us the length of Red Valley. Near the end of the valley, we saw evidence of the 2005 fire. We passed the agave roasting pit that is becoming overgrown with desert foliage. We passed the junction with the Badger Pass Trail. Then we saw our cars waiting at the trailhead. This is a nice hike with a different sort of terrain and very different views compared to other parts of Red Rock Canyon NCA. 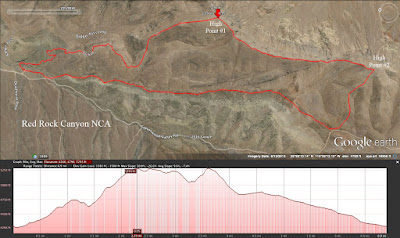 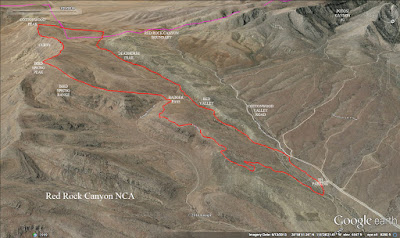 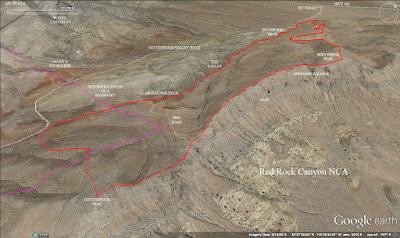