Valley of Fire got a shower yesterday! The sandstone is clean from old sand and the colors were simply stunning! ... Really! However, one caveat! The small slots in the slot wash were flooded, so, let the fun begin!

After driving north on I-15 from Las Vegas to Exit #75 (Valley of Fire), eighteen hikers drove out to the state park and up to the end of the road ... which BTW is now called White Domes Road ... and parked at the White Domes Trailhead parking lot. (See the sign where you bear to the left just before the visitor center. It was most previously Mouse's Tank Road.)

We got out of our cars and prepared for the hike as a group of tourists walked by. Then we headed down the hill after them.

The morning was cool but there was very little wind. We felt the temperature change when we left the sun at the movie set and dropped into the shade of the slot wash below to turn left.


We had seen the orange cones on the drive out the scenic road marking the places where sand and mud had recently crossed over. We all knew that meant we would be dealing with flooded slots. As seen by the lack of footprints in the sand, we were the first hikers to blaze this trail today so, it was up to us to make the trail hikable! The first slot we came to had a large puddle that we skirted by as seen in the photo above. You would think that the leisurely group of hikers were old pros at this sort of thing! But, ... the second slot was a different story.

We got through most of it but, at the end, there was a long deep puddle that covered the ground from wall to wall. One hiker decided to try crossing it without shoes. "Cold!" is about all he said.

We quickly decided that it was too deep to try to put rocks in as stepping stones like we had in a previous puddle. So, we turned around to inspect the up and arounds that were offered.


Keeping in mind that this was the leisurely hike of the week, we had a short lesson in scrambling. Lean forward, put your hands on the rock and climb up the sandstone keeping your weight forward until you felt safe enough to stand. Perfect! So, we all scrambled up and over the rock that rises above the flooded slot and connected with a trail that led down to the slot on the other end. From here out to the road, it was just a matter of finding the driest corridors and placing rocks as stepping stones in strategic locations.

As we passed by some fins sticking up from the sandstone, we took the opportunity to warn each other to not step on them so that those who come after us may have the chance to stare and wonder as well.

After we crossed the road, we cautiously checked out the next slot thinking we might have to go around it, too. But, this one was mostly dry. It was nice to see that some of the sand that covers the beautiful designs on the sandstone floor had washed out with the rains.


We turned up the hill on the left side of the slot wash when we saw the yellow and pink sandstone drawing a line. As we climbed up the short hill, we photographed the views presented to our right of the snow capped Virgin Peak rising up in the distance with the colorful sandstone in the foreground. (We had several photographers today!) At the top of this hill, we dropped down into the sandstone wash beyond. The wash circles around a large dome of rock that is covered with waves of different colors; The Wave Wall.

The wash, itself, is fun to descend with a couple of sandstone slopes. Then the wash leads around to the left.

As the wash ended, we looked up to our left and saw the most colorful section of the dome as seen above. Next, we turned to our right to hike away from the wall. There were several other hikers around this area. These people usually get to this area using a shorter route.


Heading straight in this direction, we passed through a small gap and found the Fire Wave. This is a mound of striped sandstone that twirls up in a cone that resembles an ocean wave. It is a big attraction here at the Valley of Fire. We stopped here to take our break. There is a lot of "seating" here on the rock and the views are ... stunning! While we rested, some of the photographers ran here and there looking for photos. And, some of the other hikers chatted with the other people who were there to take photos. Did I mention that it was a gorgeous day?

After the break, we dropped back into the slot wash next to the Fire Wave and turned right. Not too far, we turned to the left to ascend on the sandstone across from the Fire Wave area.

Having not perfected this portion of the hike, we wandered a little too far to the left while climbing parallelish to the slot wash. Nonetheless, the views from this hill are out of this world!


Eventually, we found the descent trail and dropped back into the slot wash just before we crossed back over the road. We climbed back up through the wash using some of the same stepping stones that we had placed in the mud. When we got to the flooded slot, we climbed back up the trail then, instead of immediately dropping back into the wash, we climbed over to the White Domes movie set again. This time, when we dropped into the slot wash below the movie set, we turned to our right.

The right turn led us into a very tall slot that is fun to hike through. Then, on the other end of this slot, the White Domes Trail turns to the right.

The White Domes Trail is well marked by the state park. The trail markers are large heavy pyramid shaped trail signs as seen in a photo below.


The sides of the trail are marked with lines of rock in many places. We followed the trail up through beautiful tall hills of white, pink and yellow sandstone. There is a nice window that you pass by up to the right. Then the trail takes you through a gap in the sandstone hills and ends at the parking lot below the picnic tables and restrooms. We had a lot of fun today! Shoes will be laundered and naps will be taken! Excellent outing! 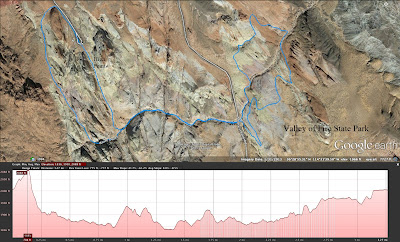 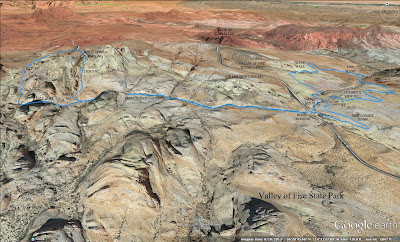 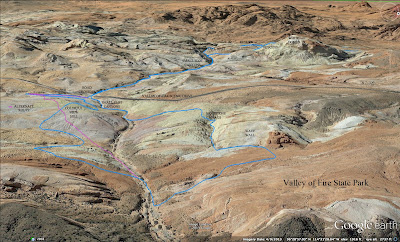