From Las Vegas, drive I-15 north to Exit #75, Valley of Fire State Park. Head east and watch your speed. Suddenly, the road goes around a curve and below you, there is an oasis of red sandstone; a virtual playground for the soul. Fifteen souls arrived at the gate ready to pay their state park dues but the attendant waved us on. Entrance was free today after all. Instead of giving money, we were given advice. Watch your speed in the park. The rangers WILL stop you. And, we can all attest to that fact! We saw it with our own eyes. Luckily, we were heeding the advice. (It is very difficult to drive 25 mph but do it!)

At the end of the Mouse's Tank Road, we drove into the White Domes parking lot and parked. There are two restrooms there at the trailhead.

When we were all ready, we started hiking out into the sand. The sand is so deep here that it feels like you are trudging up a beach.


The trail drops precipitously via roughly made rock steps down to an old movie set that still stands. In 1965, "The Professionals" was filmed here. We turned right in the wash below and entered the tall slot on the White Domes Trail. In the movie, they made it look like they rode their horses all the way through the slot. No can do. At the other end of the slot, we stayed in the wash until there was a trail that led up the dirt to the left. After warning each other to not step into the cryptobiotic soil, we followed the trail as it turned left again between two sandstone walls.

We continued straight in the main alley way passing the Eye of the Iguana and the Fat Monolith. From here, the left wash takes you through The Squeeze.


After you "squeeze," you climb up. Look to your left here and see the first "blow your mind" view as seen above. Here, someone has gone to the trouble of placing cairn after cairn on the trail that we had intended to take. Across the sandstone on the right, then down a small connecting wash. The cairns continued as we turned to the right and made our way temporarily out of the sandstone so that we could circle around Salmon Rock to the right. A trail in the brushy sand led us to the base of a large sandstone slab wall.

The slab is a great feature of the hike. Although it is steep, a good pair of hiking boots will take you up the side gaining elevation fast.

We kept climbing up and to the left until we could circle around to the right and see more brushy sand dunes.


We trudged through the sand a ways up until we saw our ramp leading up from the left side. (Look for the worn sandstone.) Climb the ramp all the way up to the top then step to the left onto the next sandstone fin. From there, follow this fin down to the ground below. It becomes quite steep at one point so be careful. There is an option on the next fin to the left. Either way is similar in difficulty. Next, cross the brushy sand here and begin climbing up the sandstone ahead to the right. At the top of this, curve around to the left and see the huge Top of the World Arch that is tucked into a nice wildlife wind break.

It is easy to climb up to the top of the arch in 3 or 4 different ways. The sandstone beyond is also interesting to explore.

We took our break here. It was a little windy but the sun was warming up the cool morning nicely.

The canyon trail was cut by Brian D. It is a fun descent that requires a few contortions as seen in the photo below.

At the bottom of the canyon trail, we passed the Fat Monolith and turned left into the main alley. Next, we turned right into the wash across from the Eye of the Iguana.


This wash is one of the most beautiful washes the writer has ever seen! The colors paint pastels from the foreground to the distant views. Many photos were taken as usual in this section of the hike. We followed the wash over sandstone spills all the way down to the Mouse's Tank Road at wash #3. As we crossed the road, we were thankful that the rangers were on patrol in the 25 mph zone!

Before starting this section of the hike, we warned each other to be careful not to step on the small fragile fins that poke up through the rock underfoot.

We followed the wash a little further then turned up to a one o'clock direction to climb over sandstone.


By maintaining this direction as best we could, we headed straight toward the Fire Wave. We passed over many of the small fins and stayed up above the washes offered to the right. This area is also very colorful as seen in the photo to the left. Our direction took us to where the rock wash to the right flowed into a sandy wash in front of us. We dropped easily into the sandy slot wash and turned to the right. Counting three washes that offered turns to the left, we took the next one that leads directly up to the Fire Wave.

Oohs and Ahhs! Amazing, huh? How did this happen? Finished with this feature, we hiked toward the Wave Wall, a wall painted with a wavy set of colorful stripes.

A left turn at the Wave Wall took us on an ascent up through a sandstone wash. When the sandstone on the left side turns from pink to yellow, we started up. Following this color line took us over the hill and down to the slot wash below.


The final leg of the 7 mile hike turned to the right and led through a narrow small wash with medium high walls. We crossed the road again at wash #5. Continuing through the slot wash, we passed through a couple more small interesting slots and ended up at the movie set where we began. We turned right one last time to climb the steps back up to the cars. This hike could be named "The Best of Valley of Fire!" It is one way to see the most famous features in one hike. Excellent morning! 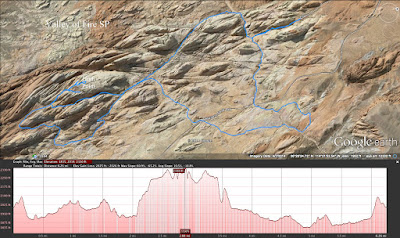 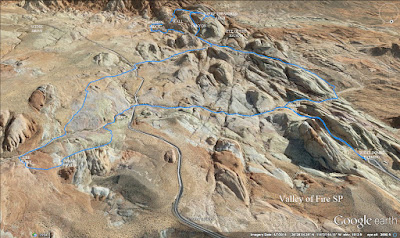 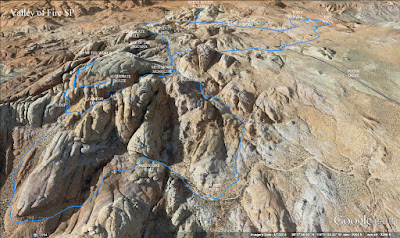