Many people think that Black Mountain in Boulder City is that peak with the bench and informational sign on top where there is an excellent view of Las Vegas and the Spring Mountains beyond. Au contraire! This is Black Mountain Overlook. Today, fourteen hikers set out for a climb to this overlook and a following traverse over to the next higher peak, Black Mountain Peak. We started from the River Mountains Trail trailhead on Highway 93 in Boulder City, NV just above St. Judes Ranch. Forgoing the longer route of trail, we chose to get to the meat of the climb via the retention basin trail.

As we hiked the trail along the center wash, we saw several bighorn sheep up on the left. Counting the younger kids down below and at least three on the ridge above, we saw ten. (Sorry, Alicia.)


Our hike took us up the familiar trail full of switchbacks. We climbed at a moderate pace and, until the end, we stayed together. At the Red / Black Saddle, we stopped for a short break then moved on down and up the Black Mountain Overlook trail. Here, we got separated because there were several different queries going on about the terrain and routes around us. Eventually, we all made it up to the top of the overlook where we shared the space with a group of younger girls. The wind was more pronounced up on the ridges and we needed to don our jackets for the time being.


After enjoying the overlook for a couple of minutes, we started down the other side on a small game trail that is used to traverse the ridge. Three women broke off from the group at this point to make a loop return without going up to the peak. The remaining eleven hikers continued out the ridge, climbed up a steep slope, found another ridge and climbed another slope. All along the ridge, we had beautiful views of Lake Mead below.

The "trail" was not always apparent but the ridge direction is obvious. Precipitous slopes fell on either side of us but we were enjoying the challenge.

At one point during the traverse, we climbed over a rock barrier and circled beneath a small arch clinging to the rocks underfoot. The entire traverse required caution and concentration.


Finally, we climbed up on top of the approach ridge and made our way easily over to the high point where we signed into the log book. We sat in the mild wind and took our break with views in every direction. We could clearly see River Mountain, Las Vegas, Lake Mead and Red Mountain. It was a beautiful blue sky to the north but it was beginning to be overcast to the south.

After the break, we began our drop to the east side of the peak where we passed a geocache hidden under some rocks in a little shelter cave.

Not too far down, we came to a saddle. Here is where we began a very steep descent down to the wash below.


About a third of the way down, there is a small arch just big enough to hike through. One by one, we did just that and continued down. We gathered in the wash below and started down a fun gentle rocky descent. At the bottom of this particular canyon, there is a nice short dry fall after which is the tent site. The tent is in shambles but there are still jars of something there. It is unlikely that anyone lives here anymore. After this, we continued down the wash until it flattened out and we climbed up on the slope to our left.

Crossing the Caldera Trail, we bushwhacked over and down into the next canyon wash and started up. By now, we had taken off our windbreakers again.


This canyon wash is where a large arch resides not far up on the left. A few hikers went up to the arch for a "look see." Then, a little further up the canyon, we saw that the very tall cairn is still standing. A few hikers added their small rocks to the top of it and we continued up the canyon. Around a point that jutted out from the right, there is a relatively gentle slope up to a saddle area. We decided that this was the best way to get up and take a look. We wanted to find the easiest way to get back to the overlook trail.

On the saddle, we saw the twin cairns seen in a photo below. They were standing at the bottom of the hill. We could also see the target trail above on the other side of the canyon.


We dropped down the hill to the cairns then considered the best way to reach the trail above. Some hikers went straight up. Some hikers took a diagonal route up to the right. The latter group's route seemed shorter and less steep. From there, we returned to the Red / Black Saddle, descended the switchbacked trail, gave a nod to the bighorn eyes watching us from the ridge above, and hiked back down the wash and culvert then through the basin. We had a great morning in Boulder City! 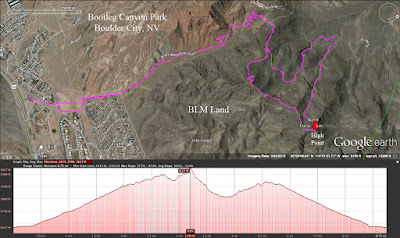 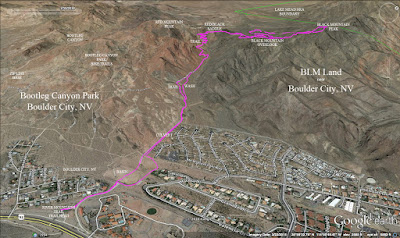 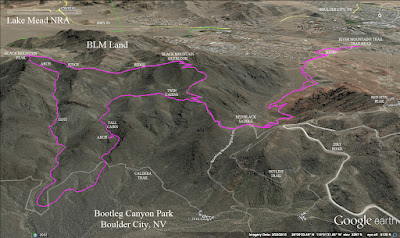 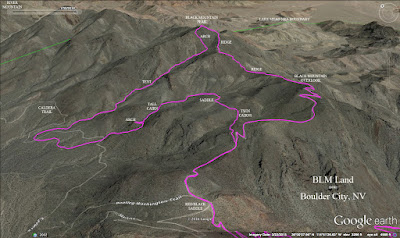