Fortification Hill is the long flat and tilted, basalt covered plateau that is seen beyond Hoover Dam when standing on the O'Callaghan-Tillman Bridge of Highway 93. It can also be seen from many points in the Lake Mead NRA and holds its place as a landmark for Las Vegas based outdoor enthusiasts. The trailhead is located at the end of the Kingman Wash high clearance dirt road. Take the first exit in Arizona after crossing the new bridge and turn left. The recently graded dirt road is rough but can be handled easily with a little clearance. Turn right at the pit toilet and beach area and continue until the end of the road where there is an obvious place that a car can turn around.

This is the trailhead. Fortification Hill rises up to the left and the approach wash and/or ridge start here. Today, most of us made our ascent on the ridge.

The ridge trail is steep in several sections but, in between the sections, there are saddle respites.


The three hikers that took the wash trail up junctioned with the ridge trail when about half of the other hikers had passed. We gained elevation very quickly and the views offered to the right (east) and left (west) were worthy of the oohs and ahhs we gave them. While we climbed, an unending parade of tourist helicopters roared overhead. ... Well, so much for the quiet of wilderness. ... Finally, the group came to a rest at a small group of large basalt boulders sitting on the trail as if they didn't belong. This was our one and only rest stop for the 1500 feet of elevation gain on the ascent! Yeah. We bad.

As the last hikers climbed in, the front group took off. There was one more steep section before the wall. Near the wall, the trail turned to the right to contour the base of the wall to a place where we could scramble up.

The scramble starts with a short class 3 climb as seen in the photo above. After that, the trail leads around to another steep scramble that stair steps up to the top of the plateau.


Five years ago, the trail on the top of the plateau was simply a suggestion. Now, the trail (from beginning to end) was very clear and easy to follow. The front group was almost to the high point but a few of us took a little more time enjoying where we were. Although we did see one pile of bighorn evidence, there isn't too much for the animals to eat up there. A little cholla, a few barrel cactus, creosote, bursage and sparse mohave yuccas were all that was there. As we hiked around the rim, we could see our cars at the trailhead below and the ridge trail snaking its way up.

Rumor has it that Fortification Hill was made from ancient volcano blasts from the nearby Wilson Range. The hill has journeyed from its original location and Lava Butte was even once associated with the hill.

Since the writer is not a geologist, she cannot explain why the top of the hill appears, at least, to have been an ancient volcano itself.


The entire climb seemed short when we arrived at the high point. It was an excellent day for views as clouds were beginning to roll in to decorate the skies. There is a good amount of snow on the Spring Mountains and rain has recently washed the multi-color washes of the foothills below. The new bridge could be seen beyond where we knew the dam to be. But, Hoover Dam was tucked in between the Black Canyon walls out of sight. The helicopters continued throughout the hike but our revery at the high point seemed quiet. BTW, there could have easily been sixty choppers passing by us overhead during the 2.75 hours we were hiking.

After a nice break at the top, we returned the way we came around the plateau. Then, we carefully descended the wall portion down to the ridge.

At the ridge, it was slow going as the trail is steep and slippery. Two hiking sticks are helpful in this situation although two healthy knees might be more useful.


We regrouped at the large rocks and continued. At the ridge/wash junction, the hikers switched places! The wash ascenders descended on the ridge and vice versa. The advantage of descending in the wash is that the steep slippery descent needing two sticks becomes a thing of the past. So, we all hiked down to the cars arriving at about the same time. It was a great morning! Gorgeous weather! And, optimal friendship! 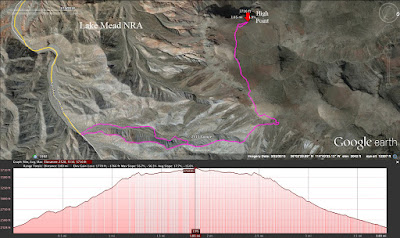 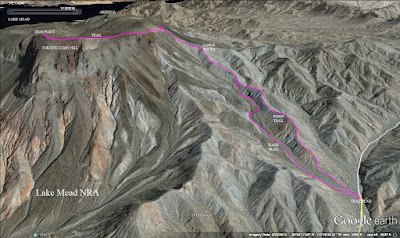 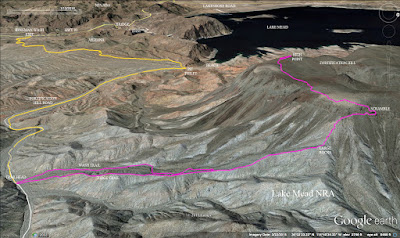