After yesterday's difficult climb up to Fracture Ridge Peak, several hikers returned for the climb up Black Mountain next door. In total, there were eleven hikers who began at the Shadow Canyon trailhead parking and followed the asphalt up to the water retention basin. The group circled around to the back side of it then started up the first trail labeled "Black Mountain." This trail and others in the area are part of the Sloan Canyon National Conservation Area.

After a bit of wind last night, the air over the city of Las Vegas was clear. Add the beautifully snow capped Spring Mountains and the view was the best it could be.

There was very little wind until we reached the summit ridge so many of us removed their outer layers of clothing for the sunny climb.


The group separated into two smaller groups and the leading group climbed at a strong and fast pace. The following group climbed at a moderate steady pace. A few times, the front group waited for the back group to catch up. As the ascent continued, the terrain got steeper and steeper passing each shoulder of the ridge. The last climb before the summit was the steepest and brought us stair-stepping through the lava rocks. The trail was very clear until we reached this point. Here, we had a few choices in addition to the "real" trail.

Also during the last climb, the wind kicked up and outer layers were donned again.


The first thing you see as you make your final approach is the new flag on a real flag pole. Even this flag is already slightly tattered. It is almost always windy up on this ridge located southeast of Las Vegas. We sat inside the wind break made of rocks and felt the warm sun on our backs. We signed into the log book and had a snack. It was a good and satisfying climb. Our attention turned to the north ridge of the mountain. Today's plan was to explore a descent trail that was new to all of us.

Since the trails in this area are well marked now, we noticed the marker starting off of the peak down the north ridge.

The trail followed the ridge until the end where we began a very steep and rocky descent down to an approaching ridge for the mountain. This new ridge parallels the ridge we used for the ascent. Once we reached the ridge, we found a much better trail whereas before this, we had been following trail markers and cairns with very little actual trail. The trail appears old but it is only vaguely clear. Nevertheless, we were able to follow it down on a never-ending steepish slope.

We descended through the rock and loose dirt terrain. Concentration among the hikers was palpable.

There were very very few flat places where we could rest our legs and corps.


Finally, the trail dropped down to cross a large wash then climbed back up near the water tanks. At this point, the trail became quite nice as we made our way over to the retention basin. The loop hike is hard on your body but so is the alternative descent down the trail we came up. Black Mountain is and always will be a bear! 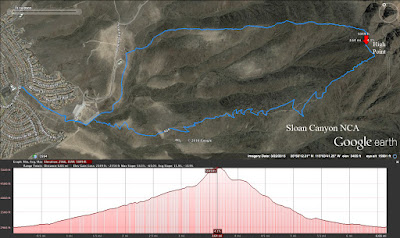 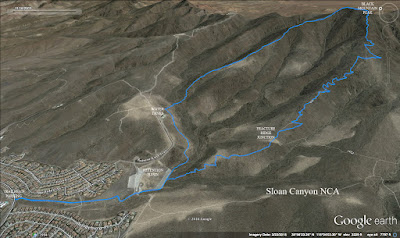 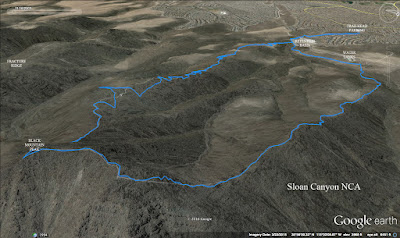