With some trepidation about the whole Bundy situation, the Around the Bend Friends traveled to Gold Butte feeling strength in numbers. With seven high clearance vehicles willing to make the drive, we had twenty-seven hikers studying the ancient petroglyphs starting at the Falling Man parking corral. Since it was such a wonderfully large group, a count was made at several opportunities. But, that said, the group stayed together very well from beginning to end. At least half of the group had not been to this mysterious location before where Native Americans lived and pounded out pictures approximately 1000 years ago. Rule #1: Do not touch the petroglyphs!


The route we took was very close to the route we had taken in years past starting with a short and steep sandstone climb up to see a high panel of petroglyphs. From there, a few hikers tried out the "Birth Canal Chute" and we circled around to the Petroglyph Tower. The preamble was done and we headed over to the Falling Man crawl through. One by one, all 27 hikers went through the large hole to come out on the other side and view the famous Falling Man petroglyph. As a group, we continued around the next sandstone island to see several other rock pics including the Circle of Bighorns. Rule #2: Step only on old trails or sandstone.


We continued around to the right and hiked down Pothole Alley. At the bottom, a right turn took us to Newspaper Rock. Also in this vicinity, a ramp took us up to view a three level set of panels. The views of this area reached all the way across Lake Mead to Valley of Fire State Park. An important navigating landmark, Black Butte,  could also be seen rising in the near distance. Time was given to the entire group to take their photos and enjoy a short study of the panels. The area had received a lot of rain in the last day so colors were vibrant and deep. Today, the sky was partially overcast but there was no threat of further rain.


We connected with a nearby trail and followed it around a half mile. At the end of the trail, we arrived at a rock wash. Dropping down the short wash, we arrived at 21 Sheep Wall where we, again, allowed time for photos. There were several theories as to which sheep on the wall were included in the "21!" Done with this panel, we turned to hike down the 21 Sheep Road directly toward Black Butte. An old cow trail took us up off the road to the left and we followed it around past an old dam to arrive at a fat low natural bridge on the left. We hiked under the bridge and climbed up on the rock immediately beyond.


Surprise! The pond was filled with water! Many of today's hikers had not seen the pond full before. A group photo was made from the other side of the pond and everyone got their own shots. From there, we dove into the Maze, a short foray through small sandstone canyons to reach the wide open desert beyond. If you choose the correct canyons to pass through, you arrive at an old trail that leads you through the sand. The trail appeared that there had not been recent hikers here. Perhaps the Bundy situation has deterred us mild-mannered hiker types for a year or two.


The old trail took us past some sandstone on the left and through the Joshua Tree Nursery. When we got to a wide flattish sandstone wash running perpendicular to our direction, we started our traverse across the sandstone in front of us to minimize the impact on the surrounding desert terrain. We followed the sandstone as far as we could then crossed a small distance of sand to find the Kohta Circus Road, an old sand road. Here, we turned to the left. We followed the road for a short way, then saw, in the distance, the leftward pointy peak at the end of the sandstone ridges. This was our target.


Following the sandy road is an option here but it is a longer route. Instead, we headed straight to that funny peak on a route as the crow flies. Off and on, there is a trail. The warning would be to not get too far to the right where you might be cliffed out in the deep washes. Eventually, we came to a very clear trail and followed it to the Kohta Circus area. We dropped down to the large marketplace area below and crossed over to the huge panel. This is the largest petroglyph panel (4' x 75') in Clark County. We stopped here for our break. Hikers explored the area including the tiny slot found around the corner. Today, there was a large puddle of water at the top of the slot preventing a scramble through it. No one felt the need to climb up to the higher petroglyph panel today as in hikes past. After several minutes of enjoying the Native Americans' sacred place, we gathered ourselves for the hike back which started by following a nearby trail across the floor of the marketplace. Rule #3: Respect this historical area.


The trail took us into a long box canyon where we climbed up the end. In front of us was the crack slot which some hikers think is the highlight of the hike! Up we went into the crack; each of us dealing with the obstacles within. We counted the hikers coming out of the top of the crack then headed in a straight direction of 1:00 from the slot. This took us to the old sand road very near where we had left it earlier. Now, we followed the road all the way to a wash junction. The road is covered in deep sand that was still a bit wet from the day before. We passed huge old joshua trees that made the trudge worth the effort.


At the wash, we cut a large corner off the square junction from our route going out, and headed straight over toward the Joshua Tree Nursery. From there, we followed our footsteps to the Maze, past the pond, past the 21 Sheep Wall, back on the trail and stopped for a last petroglyph panel found at the bottom of the Three Level Panel. Jovially, we climbed back up Pothole Alley taking the alternate route behind the Falling Man crawl through and back to the cars. It was a fantastic day full of laughter! We saw a few other people and no one was being hassled by men with guns! 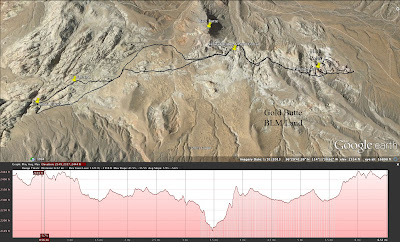 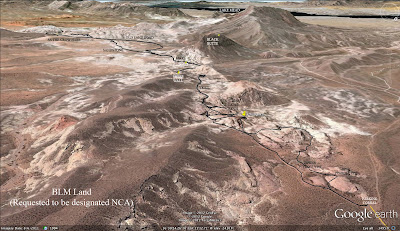 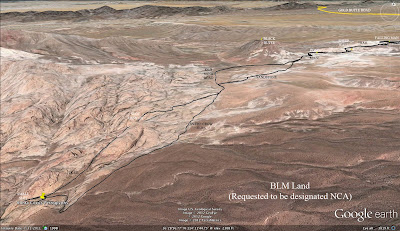 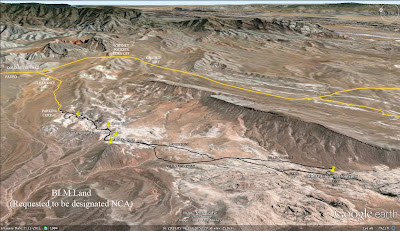 the picture you took at Gold Butt of the group should get a prize!!!!! the reflection on the water is perfect!!!!

May you please send it to me via an email as an attachment?

thank you VERY miuch for a great Saturday!!!!