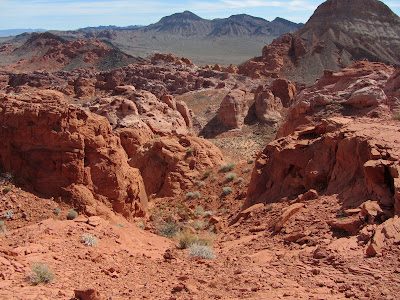 South Bowl of Fire from Overlook 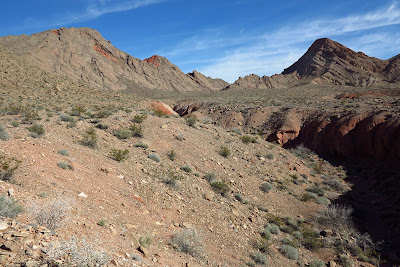 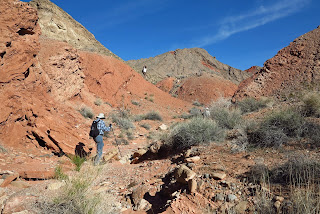 Today, seven hikers returned to Northshore Road's mile marker 16 for a reboot on the Anniversary Narrows Peak Loop hike. This time, with much better weather, we planned to take our time to explore and learn the route in a counter-clockwise direction. We parked at the MM 16 parking and began hiking toward the wash that lies between Murphy Peak and the red and black ridge across from her. Several washes facilitated us as we made our way up. Sometimes, we climbed up above the washes for better travelling. 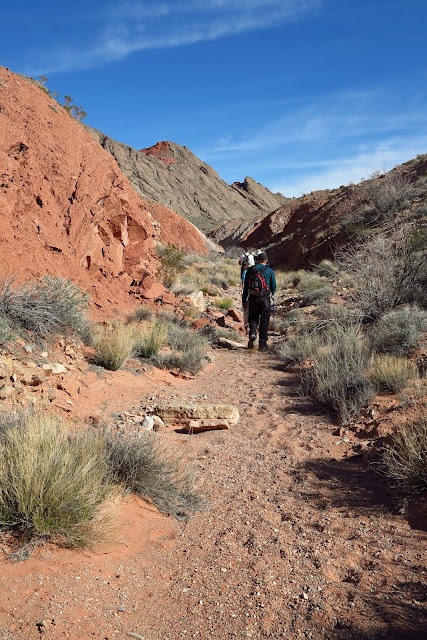 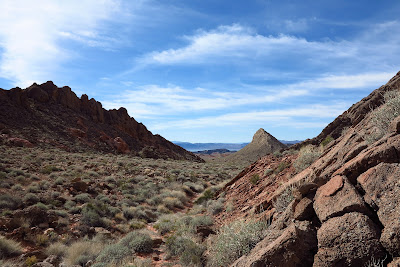 View Back to Lake Mead from Base of Crack Climb 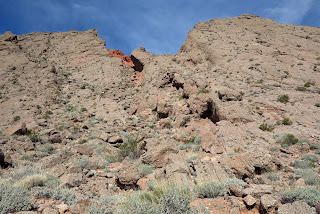 To the left, this is a photo of the crack to our left that we wanted to climb. It was steep, however, the footing was solid and much of it was arranged in stair steps. When we got to the top, we were surrounded in red rock. We had breached the South Bowl of Fire boundary high above the floor of the bowl. As we crossed the red rock landscape, we took in several views to our right of the vast South and North Bowls of Fire that sit within the Lake Mead NRA boundary. 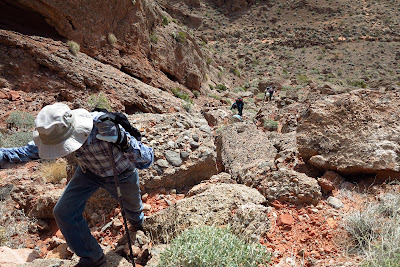 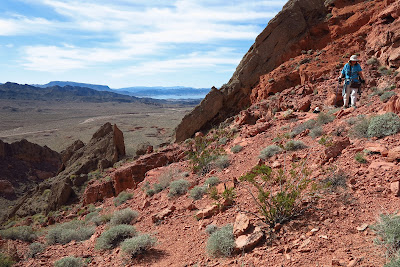 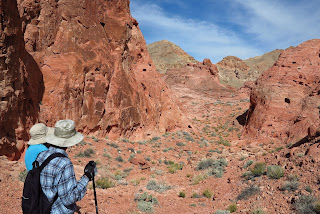 (At this point, the photog ran out of battery in her camera. Ugh! Never, fear, another hiker loaned her camera. Soon, that camera card was full and photos end before the final assault on Anniversary Narrows peak. The story will continue anyway!) So, we climbed out of the red rock in a rocky wash while passing by the chute that is normally taken down to the bowl floor on this hike. There is a slight path up towards the peak that we were following until the last part with the cliff only twenty feet or so away to our right. At the peak, we took a nice snack break. 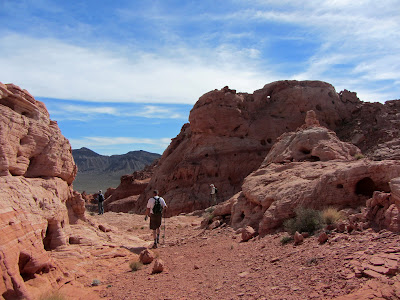 An Overlook of South Bowl of Fire 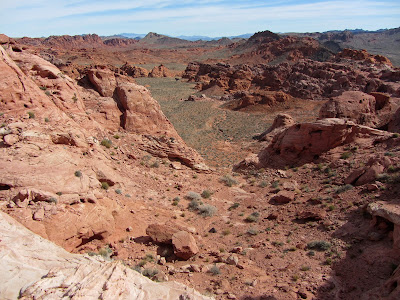 A View from South Bowl of Fire Overlook 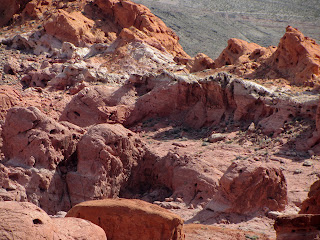 After the break, we descended the precarious ridge and trail down to the saddle. This part of the route has a lot of exposure and it pays to take it slow. Gathering at the saddle, we continued down the ridge to the other side of Lovell Ridge on which Anniversary Narrows Peak lies. Again, easy does it! Finally, we were all in Many Cairn Wash and on our way down toward the Narrows. At the entrance to the Narrows, we took another needed break in the shade. 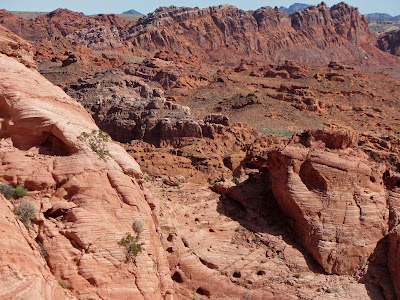 View from Overlook Toward the North Bowl of Fire 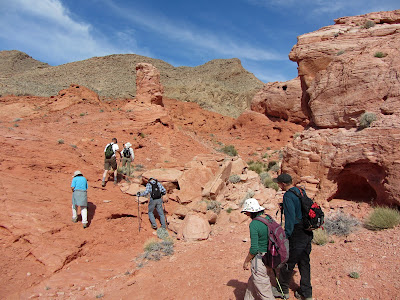 Hiking Across the South Bowl of Fire Overlook Area 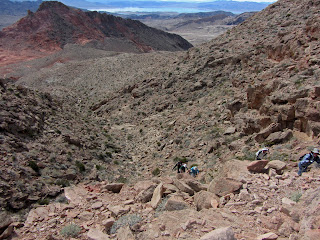 From here, we enjoyed the mid-day sun inside the Narrows (an unusual sight for us) and spilled out into Lovell Wash. The hour was late when we reached the dirt road that led back to the cars so we dumped our tentative plans to hike back in Lovell Wash and took the long arduous hike on the road. The total loop was under nine miles after accounting for the GPS bounces inside the Narrows. There were 1600 feet of total elevation gain as well. A great day's hike! 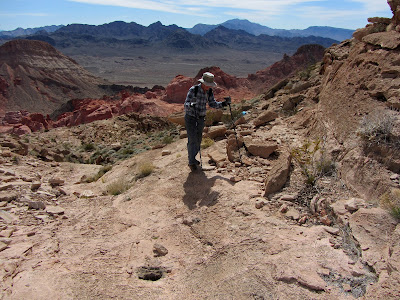 Climbing the Rocky Wash from the Bowl to the Peak 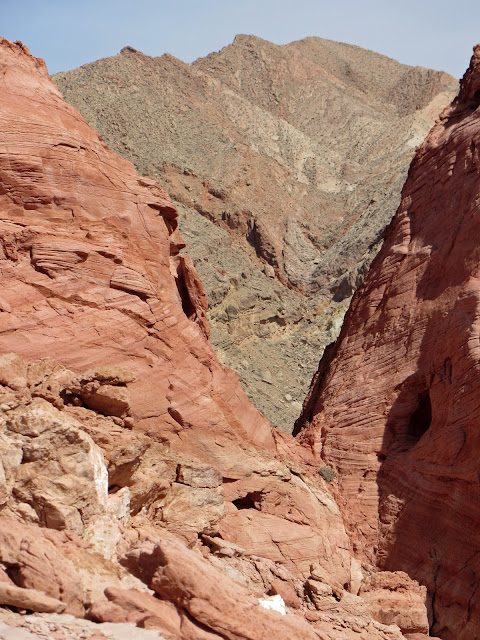 Lovell Ridge from the South Bowl of Fire Overlook 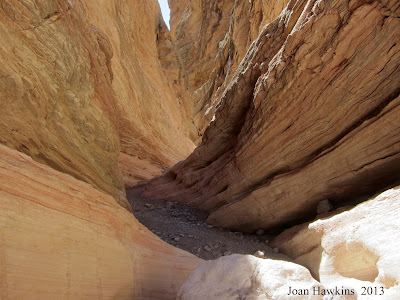 Anniversary Narrows in the Afternoon Sun 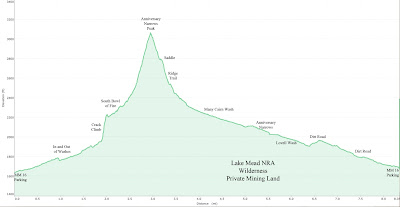 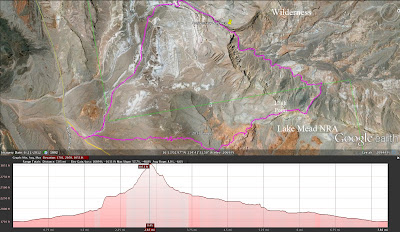 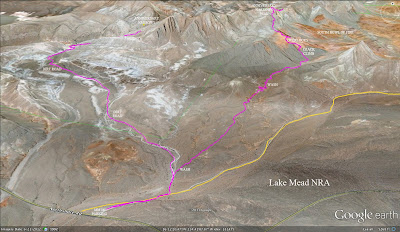 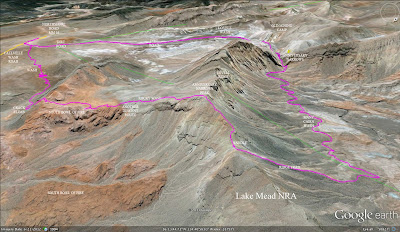