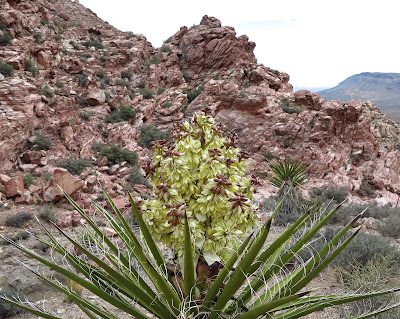 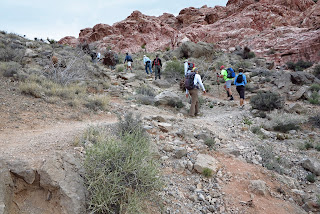 Another large group (seventeen) for Super Tuesday! Today, we set out for a grand partial loop on Gray Cap Peak located to the northeast of Gateway Canyon. Preferring the shortest distance to begin the meat of the hike, we began in the dirt parking lot located deep in Calico Basin. We warmed our lungs by climbing 5 Stop Hill that leads to Krafft Saddle. (The most stops going up the hill that anyone took were about three!) 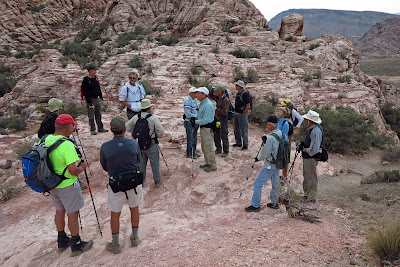 The Breather at Krafft Saddle 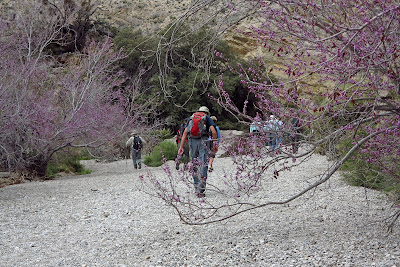 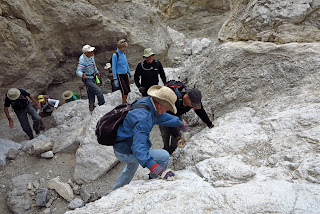 After a small respite on the saddle, we followed the trail down to Gateway Canyon and hiked up through the gravel. Reaching the Upper Gateway, we began scrambling up the limestone. Many of us knew the obstacles very well, however, there were perhaps around seven hikers who were new to the route. The wash seemed to be deeper than a year ago at many points. 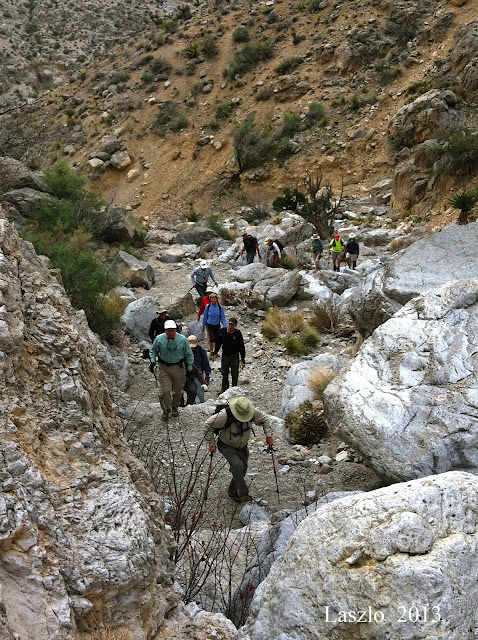 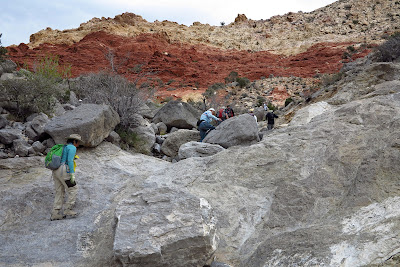 See the Tree on the Center Ridge? Now GO! 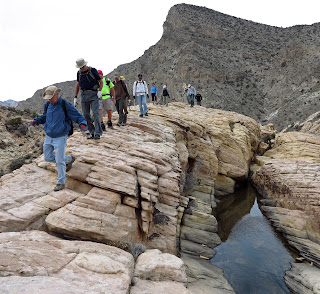 At the top of Upper Gateway, we took another breather at the red and white sandstone wall. This is a very colorful area. When we said that our next stop was at the top of the wall, the newbies laughed but hesitated not. Up we went stretching our legs and lungs on the steep sandstone. At the top, we noted that the large sunken tank was filled with water (seen below) and we circled around the tank to the left. 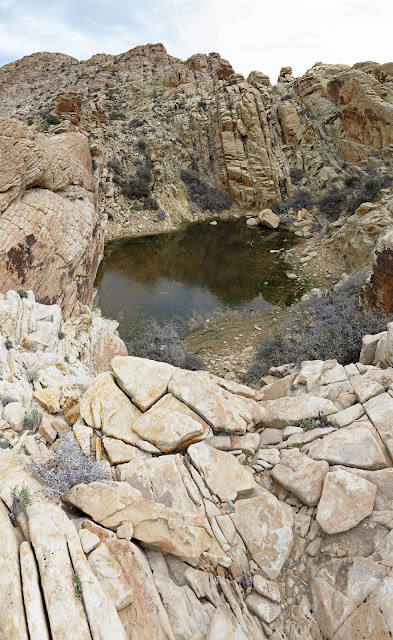 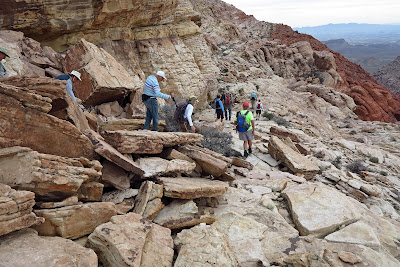 Hiking Around to Last Ascent 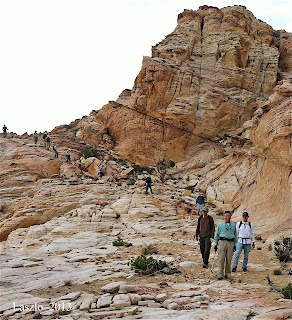 We passed the tank high above on a ledge. No one even flinched at the exposure. Then we began circling around the yellow sandstone peak up to our right. Hugging the wall (as seen above) we had views of Krafft Mountain below. At the end of the traverse, we descended to a sandstone "meadow," if you will. This descent is seen in the photo to the right. The meadow is the last respite before the last ascent. Did we stop? Nope. But we did stop when we reached the famous "picnic table" rock around a third of the way up the last ascent to the peak. 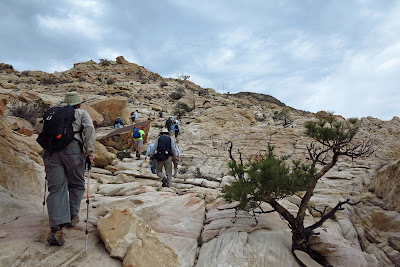 We continued our climb and found a slight trail near the top of the sandstone that led over to the limestone layer on which Gray Cap sits. On the peak, the writer's hat immediately blew off her head. No worries. That's what the neck string is for! 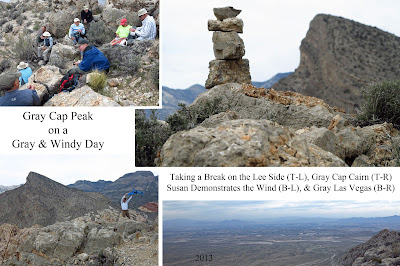 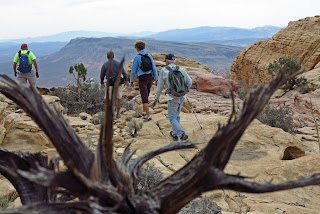 We took our snack break on the leeward side of the peak, wrote in the book and disposed of one tick. When we decided to start the descent, the wind hit us hard as we dropped down the limestone on the windward side. Upon reaching the sandstone, we were a bit flummoxed! Where were the cairns? Not sure what happened but a traverse to the east began in search of a way down. It soon became apparent that a new descent route had been born! 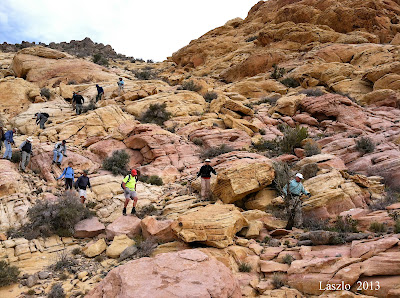 Beginning of Descent With Peak Above Traversing Over to the New Descent Route 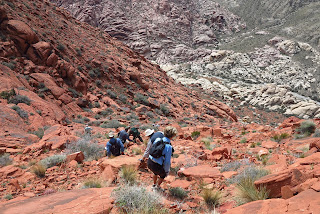 We found our descent route in a red sandstone canyon that seemed to lead straight down to Gateway Canyon. The photo to the right shows our view of the next hour of scrambling. In the top right of the photo, you can see the trail leading up to Krafft Saddle on the other side of Gateway. So, we knew that if we could find our way down, we would be in good position to complete the hike. Sure enough, with just a few twists and turns, we found our way to the canyon below at a point very near our ascent path to Krafft Saddle. From there, it was a piece of cake back to the cars ....

The whole 5 mile loop hike was completed in four hours. It had a total of 2208 feet of elevation gain. 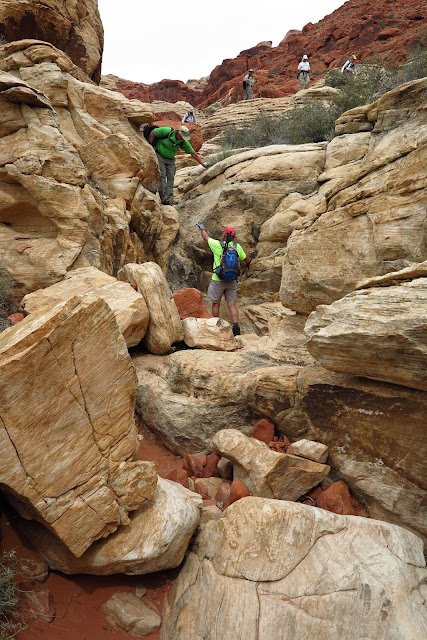 The New Descent Ends With a Drop 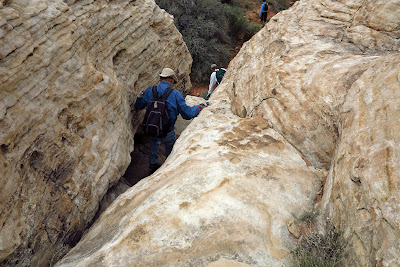 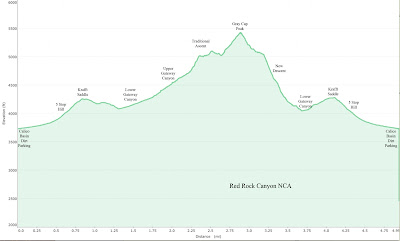 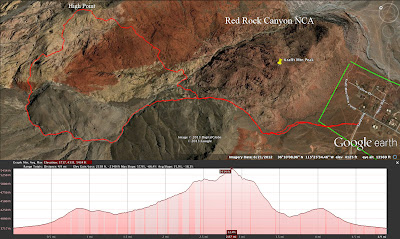 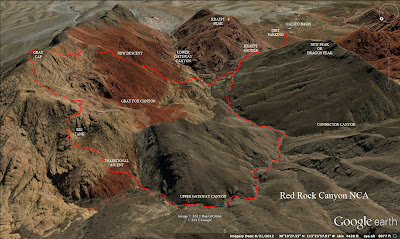 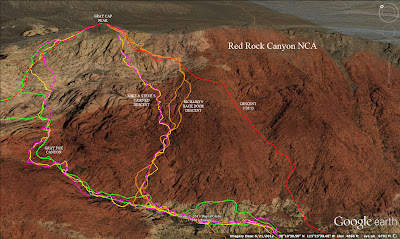 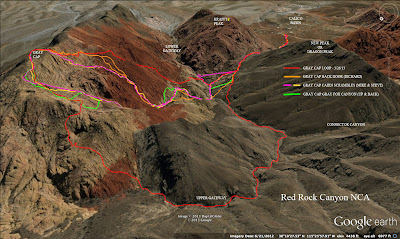