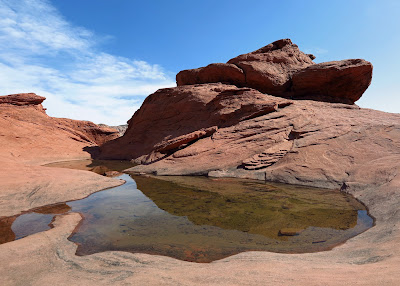 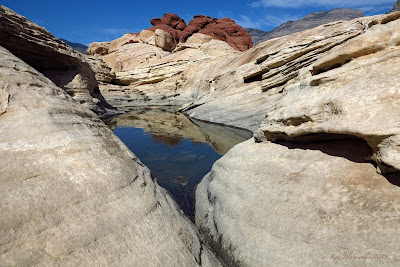 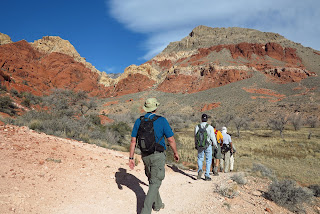 It was a 5.6 mile scramble for today's Super Tuesday Hikers of the AtBF over three peaks of the Calico Hills. We averaged one mile per hour when moving and ascended 2146 total elevation feet. Starting at Red Springs Picnic Area parking lot, sixteen then fifteen hikers started their trek over to Ash Canyon and up on the southeast side. This side of the canyon is mostly covered with smooth slab sandstone. The going is better footing, however, the climb is still quite a climb! 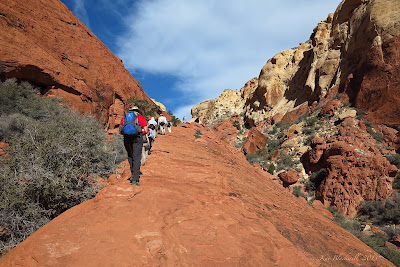 Hiking Up Southeast Side of Ash Canyon 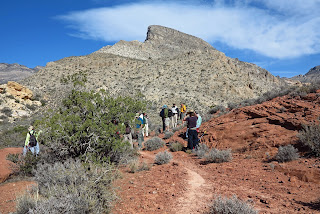 We gathered the group at the top of the canyon below the eye of the Turtlehead. We had not stopped at all during the ascent and we needed a rest at the overlook. Tough group! From here, we headed up to the north and circled around the base of Red Cap, our first peak to conquer. Our route of ascent would be a crack on the north side; another tough climb. Photos in the collage below describe some of the difficulty here. 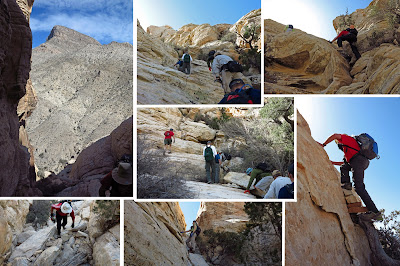 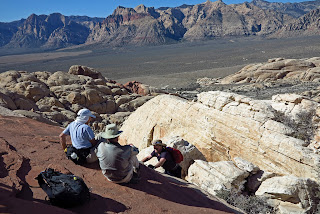 At the top of the crack, we met the hardest part of reaching Red Cap Peak. There is a ten foot sandstone wall to be climbed. Others before us have placed a tree and some stones here to aid in the quest but a couple of us also used a rope held by two sturdy hikers above. To the left, the joke was that the rope had retired for the last hiker up. No worries. He got up!

View From Red Cap of Turtlehead and Gray Cap 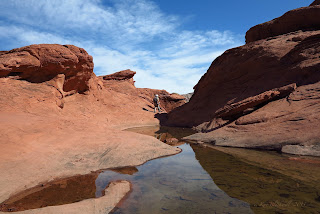 The views were especially nice today as there was a beautiful blue sky and the sandstone colors really popped! The tinaja just below the peak was filled with water and we flitted around taking photos. The wind was blowing on the peak so we didn't stay there long but took our break just below ... lake side. After the break, we descended a smaller crack and found our way over to the route that takes the hiker up onto the smaller side of Red Cap. From here, we dropped down to the tank tour level. 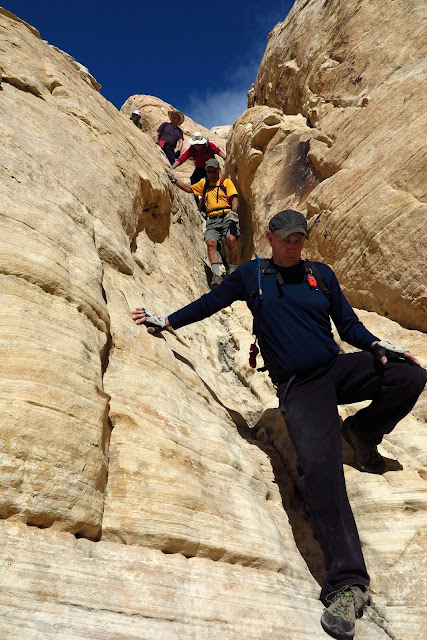 Jim Takes a Giant Step Off of Red Cap We were in the middle of the most colorful section of the Calico Hills. Most colorful and most fun to play in! Today's scramble would take us over sandstone terrain from white to red. We could see the escarpment across the floor of the conservation area. And, below us, we saw the Calico Tanks Trail. 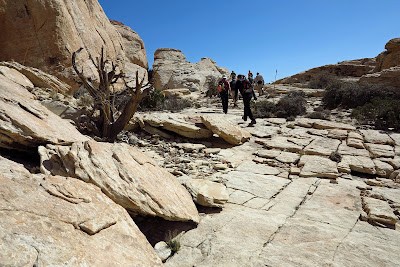 Hiking Past Route to Other Side of Red Cap 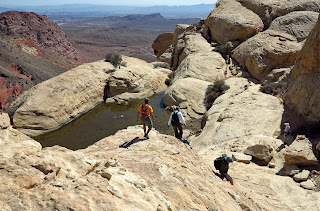 At the tank tour level, we climbed up to the top tank and crossed over to descend down to the Sundial Tank ... which no longer holds a sundial. We continued our trek over the sandstone in front of us and climbed up to a place we affectionately call, "The Diane Dempsey Descent." This is a sandstone crack descent of around fifty feet that one of the ladies of our group did ... once. 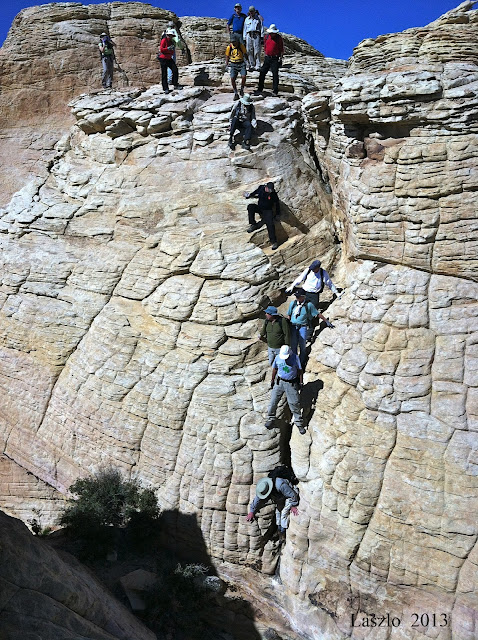 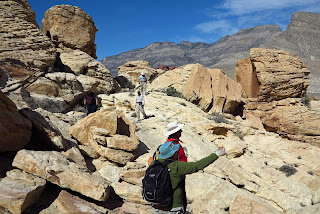 After the steep descent, we crossed up, down and over steep sandstone scrambling terrain to Calico Peak where we, once again, all signed into the book. The photo below was taken here as a panorama. (You guys can breathe again now!) Besides the photog, there is perhaps one more hiker that cannot be seen. 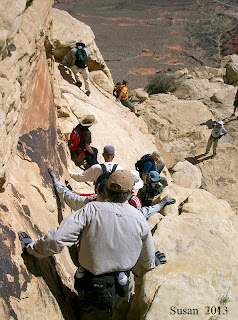 The descent du jour from Calico Peak was an exciting one. So exciting that the photog chose not to participate by finding a safer route. However, the rest of the gang was not to be dissuaded and Susan got this photo of their descent from her perspective above. Reaching the bottom first, the photog watched as thirteen hikers carefully negotiated the sandstone ... hmmm ... thirteen? What happened to #14? Well, we didn't notice until we were down off of the peak and had hiked down the small trail to the dirt meadow below that #14 was not anywhere to be found. Looking high and low from the dirt meadow, finally we saw him way up above. Perhaps he thought we were going to climb up to Calico II Overlook Peak and was getting a jump start. Anywho, we got his attention and he began his long descent down to us. 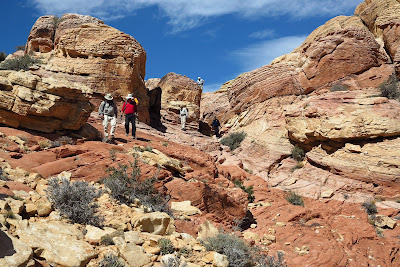 Descending to Dirt Meadow for Traverse 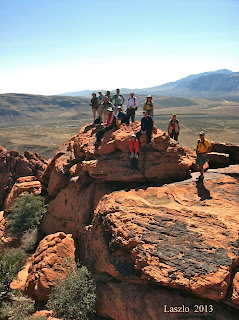 From the dirt meadow, we followed a trail that led up and across the Calico Hills at around mid- elevation. The trick here is to find the right chute to "exit" and go up to Guardian Angel Peak. We had done this hike about two months previous so we were careful to not make the same mistake we made that day. Taking a very good long look at first the wrong way and then again at the right way, we proceeded to go up the chute and arrive at the peak. There is no book here but we posed for a photo anyway. To the north of us, the monolith of Guardian Angel Peak's Sister Peak piqued our interest but, at first blush, didn't seem to be climbable without ropes. 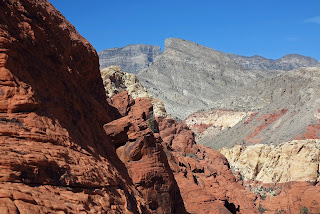 The third peak accomplished, we began our descent for the last time. Down we went in a very interesting and fun ... crack ... that would lead us to Guardian Angel Pass. From there, it was a simple descent and traverse back to the cars at Red Springs. Today's route was new and everyone agreed that it would be a great staple to keep around. 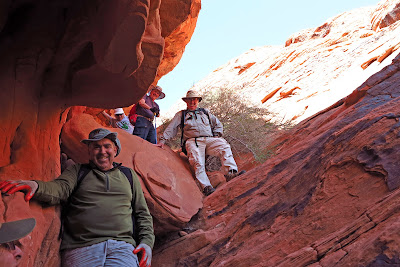 All Smiles as We Descend to Guardian Angel Pass 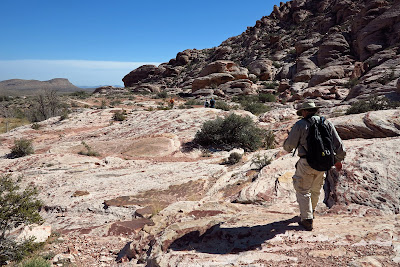 Returning to the Cars at the Base of the Calico Hills 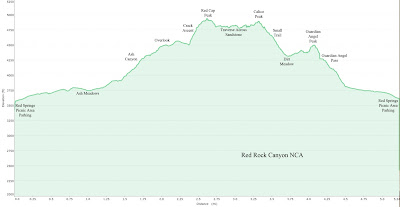 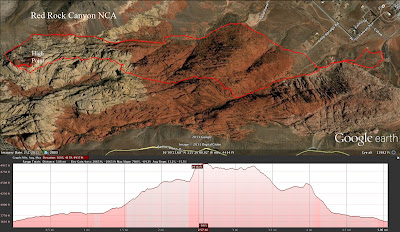 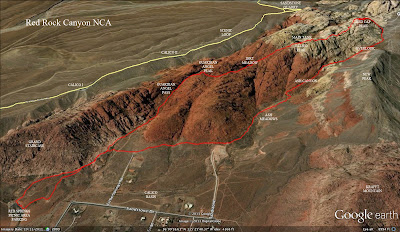 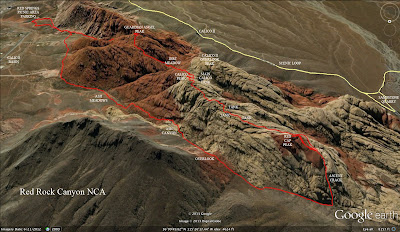