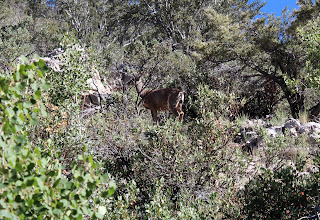 There were fifteen hikers on today's climb up to Cave Spring which seeps out of the surrounding rocks off of the North Loop Trail. It would be a 5.5 mile hike up 2069 feet of elevation. We started out from the new Echo parking lot and before we even reached the gravel road to the water tank, someone in the front of the line spotted a deer up to our left. A quick photo of the deer and we were off again. The large group quickly separated into two or three smaller groups as we began the 2.25 mile climb up to the saddle. 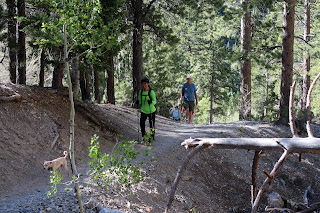 We were sharing the trail with a couple and their dog seen in the photo to the left. (No, we didn't allow another canine in the group ... yet!) By the time the writer was at the halfway point, she could barely see any of the other hikers in front nor behind. Trail Canyon is a tough cookie and everyone has their own pace for this one. After the halfway point, the switchbacks start. They are a welcome relief. Then views of the surrounding mountains are seen from the trail. 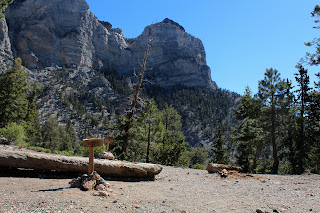 Mike, the coordinator du jour, made sure that everyone got to the saddle (seen in the photo to the left) before we continued on up the North Loop Trail to the left. While waiting for the last hikers to arrive, some hikers went up to the overlook to the right on Cockscomb Ridge. When everyone was accounted for, we began the last half mile to Cave Spring. 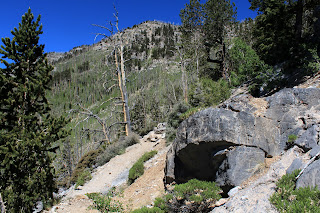 The hike between the saddle and the spring is full of expansive views. Mt. Charleston is prominently displayed. The trail leads among an area of burned forest then on up through a stand of aspens. Just as the trail goes down for a few feet, a dirt trail heads steeply up to the right. At the top of the small trail lies the cave area. A little further along the wall is where the spring slides down the rock and drips into a small pool. From the pool, the spring water is collected in a pipe and carried to a log horse trough below which lies next to the North Loop Trail. 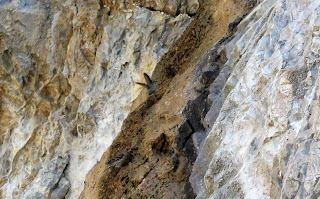 While we were taking our break, we took photos of a couple of hummingbirds sipping water from the rock wall where the spring water dripped down. After all the photos were taken, we began our descent. Again, we separated, however, this hike is all trail, easy to follow, with only one junction. We made sure that everyone got through the junction going in the right direction then we descended Trail Canyon. On our way down, we passed twenty to thirty men who were there to improve the trail. Thanks, guys! 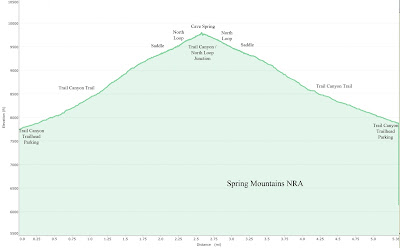 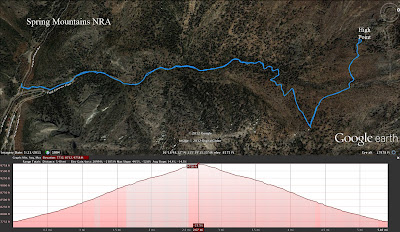 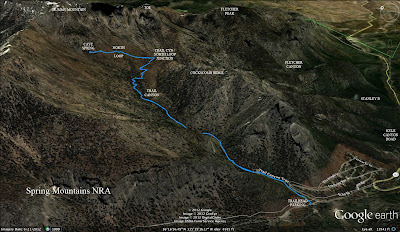