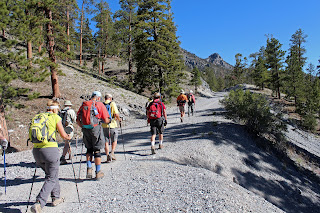 Fifteen hikers (including one that we made friends with at the trail head) arrived for an ambitious Monday hike that is still being perfected called the South Sister Saddle Loop A. With optional routes coming into play, the hike can be anywhere between 6 and 8 miles with a total elevation gain of over 2100 feet. Today, the majority of the hikers chose the 8 mile version and this is the hike which will be described below. 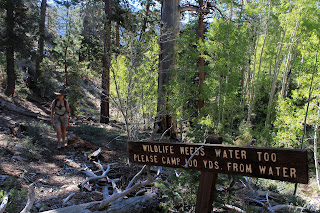 We parked at the Lower Bristlecone Trailhead off of Lee Canyon Highway and began hiking up the forest road searching for the manhole cover on the right side of the gravel road. There is a small worn trail that leads down the hill here. This is the detour around the construction going on at the Old Mill Picnic Area. Hiking around the top end of the orange construction fence, we connected with a rock lined path. A few feet further, we stepped over the rocks and began hiking up a wooded wash complete with another small worn trail. If you pass the sign seen in the photo to the right, you are on the right trail. 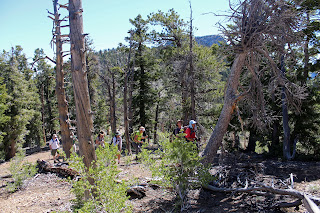 This trail begins by ascending on a comfortable slope but after crossing some downed rotted logs, the slope becomes steeper and steeper. By the time we reached the saddle, we were ready for a small rest as we waited for the last hikers to arrive. Looking around, it was obvious that we had come upon a favorite hanging out place for the wild horses in the area. Someone suggested that it was probably due to the crosswinds that blew past the dip in the terrain. (Or, they just like the view!) 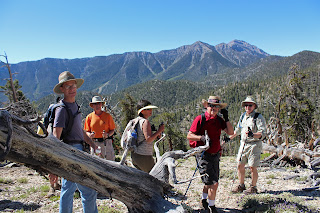 After our rest, we turned up the slope on the left and immediately found yet another small trail climbing up the ridge. This ridge was filled with old leafless bristlecones and bunches of small summer flowers. The views of many surrounding mountains were outstanding. As we hiked the gentle slope up, we spotted two wild horses munching nearby. We didn't want to spook the beautiful gentle animals so we took our photos from a distance among the many flowers. 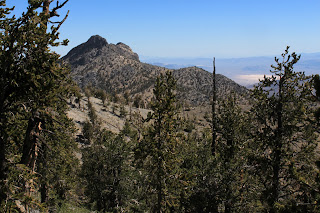 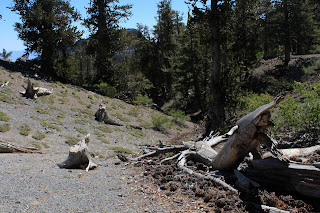 The photo to the right indicates the wash where the optional trail comes out at the Bonanza Trail. If one wanted to hike the loop in the reverse direction, the ridge trail would be found on the next hill going north past the McFarland Peak view seen below. At any rate, we happily hiked south on the Bonanza Trail enjoying the scenic trail itself. 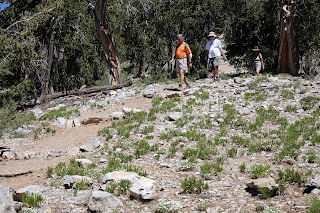 We gathered at the No Name trail junction where the wilderness sign stands at the bottom of the Bonanza Trail steps. We tried to find shade to sit and have a snack however, the sun was just overhead and shade was scarce. After our break, we continued down the switchbacks from where we could see the ridge that we had hiked between the South Sister Saddle and the Bonanza Trail. After arriving at the Bristlecone junction, we turned left onto the forest road of the Lower Bristlecone Trail. 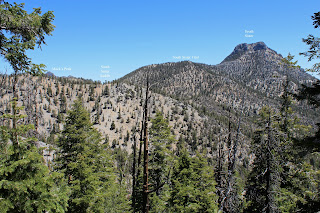 As we neared the short cut turn off, we each decided which way we preferred to go. Would it be the shortened steep down slope to the cars or would it be the gentle slope of the forest road adding a mile to the outing? Around five hikers took the short cut and the rest prolonged the enjoyment of the day on the road. After signing out and leaving the parking lot, we saw around 8 more wild horses milling around near the highway. Unfortunately, we did not see the beautiful brightly colored colt that had been seen in this same area a couple of weeks ago.