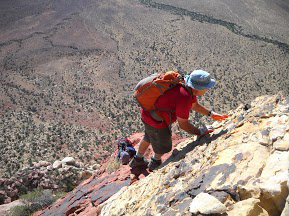 Meanwhile, back at Red Rock ... three AtBF members learn a little about rappelling. Richard took Jim and Steve up E la Tan Point, a pinnacle attached to the Red Rock NCA escarpment. Then they all rappelled down. Richard says he is taking the AtBF to the next level .... Anyone else game?

Richard says, "E la Tan is a very prominent pinnacle located southwest and under Mount Wilson. The challenge was finding the route getting to the summit." He sent these photos of their day.

Posted by Las Vegas Cockapoo at 8:39 AM