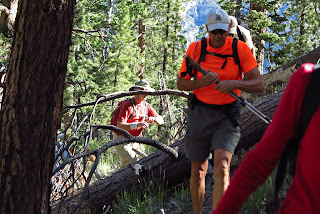 Today's climb up to the summit of Harris Peak was a Tuesday hike with a Thursday pace. Even though the pace was not hurried, the climb up through Rainbow Canyon and then up to the peak was formidable. Can we say B-E-A-R? Yes, I think we can! This hike is only 4.5 miles but with almost 3000 feet of elevation gain in 2.25 miles, it is fair to say that this is a hike for the strongest members of the club. 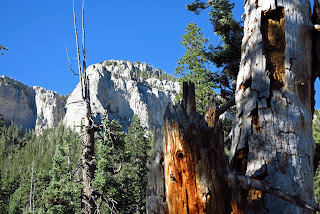 Thirteen of those strong hikers arrived at the small dirt parking area above the small Mt. Charleston community of Rainbow and began their hike straight up the main dirt drag. The route continues straight onto a trail and soon bears off to the right. This trail, perhaps one of the Spring Mountains' steepest is the Rainbow Canyon Trail. Except for the very beginning, the trail is well worn in spite of many downed trees over the path. 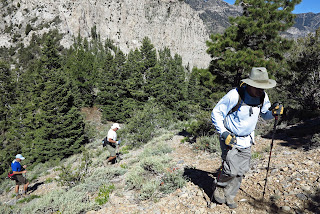 The group struggled strongly up the hill and made it to the saddle on Harris Springs Trail for a small break. Here, the hiker has a choice. Making a right on this good trail will eventually take you around the base of Griffith Peak and the South Loop. Making a left on the Harris Springs Trail will take you around Harris Peak and out to Harris Springs Road, a 4WD high clearance road at this point. The third choice is taking a left then another quick left up the ridge. This is the choice we made today. 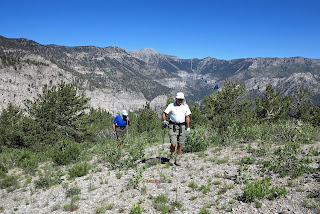 The trail up to Harris Peak is not well marked nor well worn in many places. We discussed a plan, today, to return on a Tuesday and place enough cairns to mark a trail that does not include brush. However, today, brush it was on the ascent! We swam through low growth aspens on a three-false-peak journey up the hill. We were obviously too far to the left. The steep slope theme of the day continued as we lost and found the trail several times. 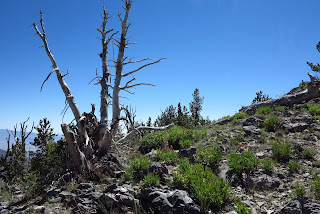 The views on both sides of the ridge were majestic. We got a view of the whole Kyle Canyon up to Mt. Charleston Peak at our seven o'clock. At our six o'clock was Griffith Peak. Lovell Canyon with the back side of the Red Rock escarpment was at three o'clock and Mummy Mountain watched us climb from our nine o'clock perspective. Yep! Harris Peak called to us from directly in front. 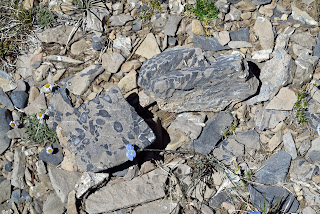 As we got closer to the summit, the trees became smaller and smaller. The low growth flowers were blooming all around. The wind brought just enough coolness into the air after a windless climb. We reached the top and were blown away by the surrounding views. 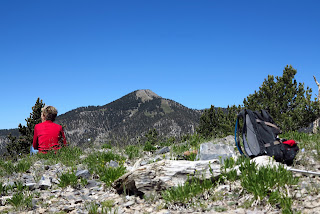 After attending to the immediate business of writing in the log book and taking required photos, we sat for our snacks and enjoyed looking around. A few fossils are found here and there and the geological survey marker has been there since 1957. All very nice but, then, we had to face the very steep down climb in front of us. By watching a previous GPS track, we managed to stay on trail going down to the saddle. There was a lot less brush this way. 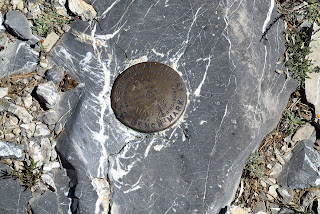 We took another small break at the saddle then faced the music. Rainbow Canyon ... DOWN! Until we reached the dirt road in Rainbow, we were watching our every step and still sliding once in a while. At least, the trail was dry! What a workout! In the end, thirteen hikers got back to the cars with all their limbs intact. Great morning in the Spring Mountains! 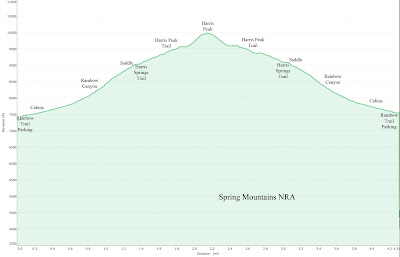 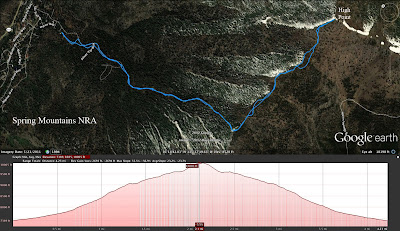 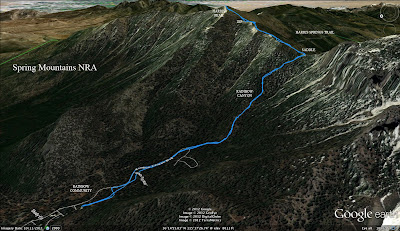 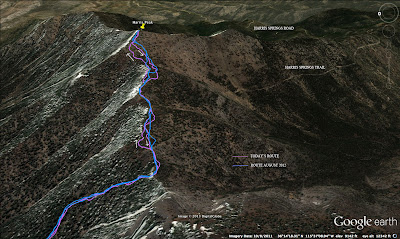