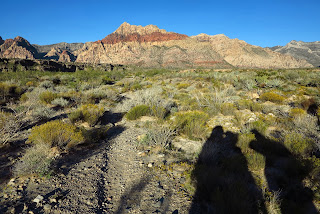 Seven hikers arrived at the Red Rock Canyon National Conservation Area BLM Visitor Center to begin the 12 mile hike around the Grand Circle Loop this morning. The air was fresh and the energy was high. Even though the hike was advertised as a moderate hike, the hikers who attended were capable of a moderately strenuous pace so we dropped down to the old road trail that headed almost straight up to the White Rock Hills 4 miles away. 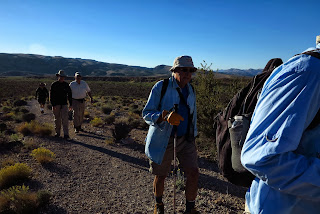 These first 4 miles were the least interesting part of the hike as we simply hiked through the desert on a steady uphill climb. The washes that we crossed were in a state of disarray. The rains that we had over the summer monsoon season, really did a number on the Red Rock washes and the trail runners that we usually see on the Grand Circle were absent. Only time will return the trail to its normally pleasant condition. 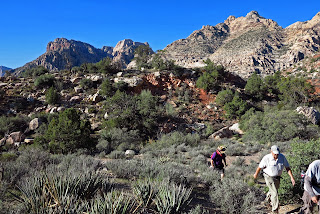 At 4 miles, we crossed the scenic loop for the first time. After this, we climbed up and junctioned with the White Rock Hills Loop and dropped down to cross the wash and climb the continuation of the old road trail. Finally, we reached the White Rock Springs Rd Trailhead where we thought we might see more club hikers that wanted to join us. We had heard from a passing hiker that there was one gentleman waiting at one time, however, we got there 30 minutes later than expected and he had already left. 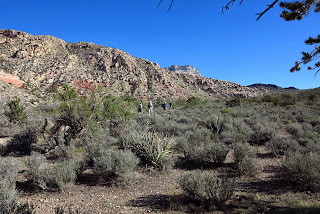 Here, we took a small break at the high point of the morning then continued by hiking down the White Rock Springs Road, crossing the scenic loop and finding the washed out trail. This part of the hike has a few ups but mostly downs as we enjoyed the scenery of the canyon floor and felt amazed at the green grass and bushes that the desert landscape showed. It seldom has such green color. 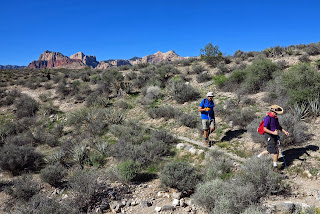 We arrived at our next meeting place only 15 minutes late but there was no one waiting for us, again, at Sandstone Quarry. Here, we took our long break in the shade with the mosquitoes. Nine miles down and three to go. We slowed down just a little but the most beautiful part of the hike was remaining and we enjoyed our walk next to the red rock among the yellow flowers.

Our hike passed through Calico II and Calico I then reached the small trail that led up to the Visitor Center. 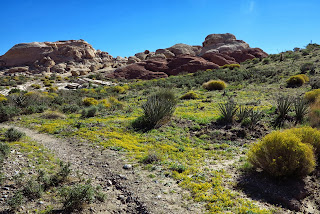 For future hikes, we arrived at the White Rock Springs Rd Trailhead 2 hours after beginning; then there was 1.25 hours between there and Sandstone Quarry. Hopefully, we didn't miss anymore hikers that wanted to hike with us. The plan needed some improvement! 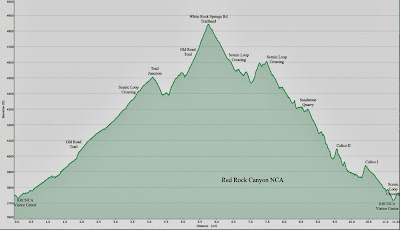 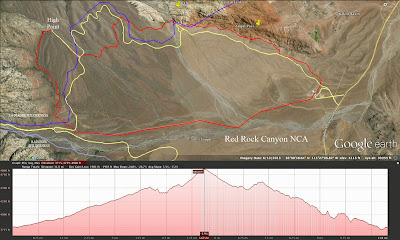 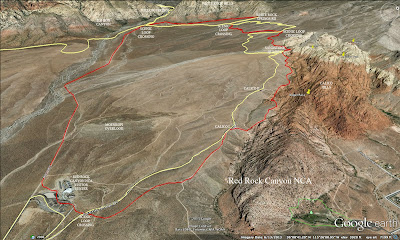 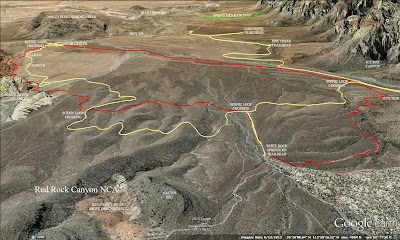