A fantastic fifteen hikers arrived on this cold windy morning for a hike into canyons where the wind was forbidden. We were all bundled up to start the hike but layers came off quickly! So, we parked at the little utility building across from Blue Diamond on Highway 159 and found that they have chained up the gate with a lock. See folks! That's what we get when we don't remember to close and tie the gate! We found our way in through the barbed wire fence and followed the trail into the mouth of Blue Diamond Canyon #2 just past the building.

Right away, we heard cries of awe from those hikers that had not had the privilege. "Who knew this canyon was right here in a 'pile of dirt' and so beautiful!"

This was the first time in about a year that the hike had been scheduled for the club. We anxiously anticipated what kind of changes the year had brought to the interesting obstacles we would encounter.


The canyon appeared to be a little more washed out at the bottom of the dry falls but not enough to make much difference in the scrambles. Someone has added a thin nylon rope to the "pile of rocks obstacle." It is anchored with an I-bolt and a small sturdy tree. However, the rope is thin and slippery with no usable knots in it. Nevertheless, we all got up the wall with a little help from our friends. Just a strategically placed knot would have helped.

Next, the canyon narrowed and provided many stair-like climbs in the limestone.

We were in the shade for most of this canyon and the wind would come and go with its twists and turns.


On up the canyon, we came to a tough wall climb. There is an up and around for this but everyone was game to try their skills on the short wall. Still very doable, the wall has a couple of good hand holds to help the feet that have to use tiny bumps in the wall for support. Again, friends helped out in a few instances. We were about to continue up further when Sherry yells out, "Deer!" Lo and behold, she was right! Deer in Canyon #2? Really? Yep. Really. Proof in the photo to the left.

The last tough obstacle in Canyon #2 can be climbed on both the right and left side. If you know the trick, the right side is easiest. Otherwise, ... you guessed it ... take some help from your friends.

We continued up the canyon until the mine tailings stopped us. We sat on the convenient boulders for our break in a slight pocket out of the wind.


After the break, we climbed up the hill on our left and found an old trail. Turning left on the trail, we followed it until we circled around above Canyon #3. Here, we left the trail and dropped into the canyon using the wash and a side trail to enter. At first the canyon is wide but it narrows and the drops become higher. This canyon's narrows are seen from above as you drop further and further down. When we arrived at the seriously high dry fall we all took a good look at the twelve foot drop and decided, "Nah. Not today."

So, for the first time in the history of our club, all participants chose to take the up and around trail that climbs up the hill to the right and drops steeply down into a tributary canyon.

The trail is covered with loose rocks but would not be considered too slippery. Just watch out for those catclaws that were popping up more and more.


We continued our drop. Each time we came to a dry fall, it appeared from our angle that it was a cliff! Then we would get there and the dry fall was extremely doable. We marveled at the zillions of barrel cacti in the canyons whose crevices open out to the southern sky. The lower we got, the more brush blocked the canyon. At the end, we used the side trail that eventually led us up and over the terrain to the left and back to our cars. These are truly fun canyons with a large dose of beauty. 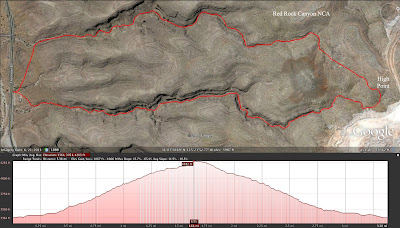 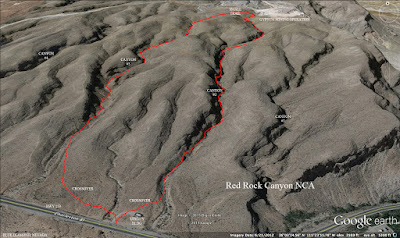