Geology is a big thing on all our hikes in the Las Vegas area and the Lake Mead NRA is no exception. When people start talking about this mountain or this canyon used to be part of this other volcano many miles away until it traveled to where it is today, ... well ..., it just blows our mind! And, then there are the colors! Red, white, gray, green, blue, yellow. You name it and there is a rock that color and you will probably find it in the areas surrounding Las Vegas including Lake Mead NRA. So, there's your argument for making that drive all the way out to the east side of town and out to the lake!

Seven hikers gathered at the Northshore Road mile marker 25 (the call box parking area) for a trip through Jean's Canyon and onward through half of Pinto Valley.

We crossed the highway and dropped down into the canyon below via the left side. As we hiked in to the glare of the clouded sun, the canyon began quite innocently.


Soon, we arrived at the first scramble up. Then there was a second scramble, a third scramble and so on. All the scrambles were very doable yet fun. For the most part, they were situated on a layer of slanted gray rock. When we reached the high point of Jean's Canyon, we were in a layer of red rock and soil. It wasn't long before we started down and one of the first drops was a dry fall. The dry fall is totally possible but must be descended with care. The canyon continues on a steep descent from there and arrives at another larger dry fall that must be circumvented.

A trail takes hikers up to the top of the bank on the left. We walked out to the end of the hill and found a steep loose trail affectionately called a Slip 'n' Slide.

The canyon continued down on a more gentle descent passing hills covered with thick cryptobiotic soil.


Finally, the canyon junctioned with the Arrowhead Highway wash and we turned right. The interesting geology continued as we followed the road down in and next to the wash. There were layers of various kinds of rock and gypsum. Apparently, there is a fault that runs through this area called the Arrowhead Fault. The uplift of the rock is clearly seen. We quickly hiked down Pinto Valley toward Boulder Wash. Boulder Wash catches all the water flowing into Pinto Valley from both ends and takes it five miles down to Lake Mead in the Boulder Canyon section. As we hiked, we passed three spring areas, one of which was actually on our road. At the west end of the valley ahead of us, we could see Hamblin Mountain, a popular peak to climb in this area.

Up to our left, a colorful steep peak rose up. We called this Rainbow Peak because it is gray limestone on the back side and red sandstone on the front side.

We passed the wide entrance to Boulder Wash then forked off to the right for a short distance.


Up to the left, we observed a mining claim cairn, part of a triangulate of cairns. Also on this small island outcropping are several small pieces of petrified wood. After walking the length of the island, we crossed over to the other side of the wide valley toward some large rocks that stood up on end. This is where the "rock chair" is found. A couple of us posed for photos in the chair then we continued along the wash a little further up to visit the petroglyphs and cowboy camp. There is a treasure trove of petroglyphs found on one particular large boulder as seen in a photo below.

Other petroglyphs can be found on other rocks if you go looking for them.

The cowboy camp is a place where the boulders are situated perfectly for shelter. There is even a rock bench made there.


We returned to the rock chair and had our snack break. We were 6 miles in and had 6 miles to get back to the cars. So, we started up the Pinto Valley wash / Arrowhead Highway the same way we had come with a small variance to make it interesting. We passed the spring and the blue rock-lined road. We passed the trail to Sandstone Spring. We passed the junction with Jean's Canyon even though only one of us noticed!

Our route back to the cars was to follow the Arrowhead Highway until we neared Northshore Road.


After taking another short cut for added adventure through small washes, we returned to Arrowhead Highway and took on Heartbreak Hill. To our right, we could see Redstone in the near distance. We continued down the road then left it for a turn onto an old two-track trail that took us to the paved highway for a short hike up to the cars. Wow! A long hike! All the while being entertained with our thoughts on the geology and the history of Pinto Valley. 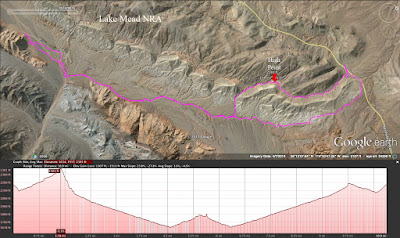 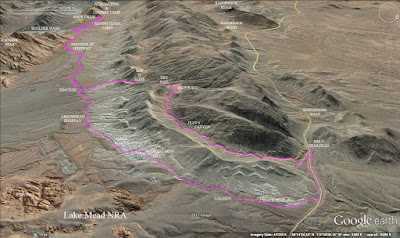 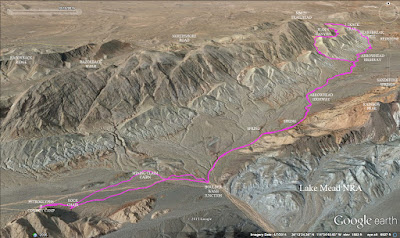