Twenty hikers said goodbye to the year 2015 by hiking the fun and amazing loop of Arizona Hot Springs (aka Ringbolt Hot Springs) in the Lake Mead NRA. The route that we hiked today has hot spring pools, fantastic geology, petroglyphs and great dry fall scrambling. With AZHS Ambassador John B. at the helm the hike was sure to be fun and informative! So, we parked at the mile marker 4 on Highway 93 in Arizona (4 miles south of Hoover Dam) and began our hike by dropping down the hill at the end of the parking lot and going under the highway bridges.

There is a wildlife camera placed on one of the trestles to keep tabs on whether the bighorn sheep are crossing the highway underneath or over the top on the specially made wildlife bridges.


As the canyon narrows, there are many twists and turns. The walls rise higher and higher on both sides and the light plays delightfully on them. There are a few small scrambles as you hike down through the sandy gravel and it was clear to some of us that the flood this canyon experienced one and a half years ago deepened these small drops. The morning was a bit nippy so the strong hikers in the group had a need for speed to warm up their bodies with exertion. The group spread out and the canyon's curves hid us from each other at many points.

There was just a little wind during the descent so the shade was comfortable. But when the group reached the Colorado River at the bottom of the canyon, the sun was welcome.

A small break was taken here then we turned to the left and began the crossover trail along the river. New signs pointed the way.


The crossover trail climbs up to Ringbolt Rock outcropping. A large metal ringbolt is still embedded in the rock and was used to assist large steamboats in their struggle to make their way upstream before Hoover Dam was built. This manuever was used at this spot from 1865 until the dam was built. At this time, the hot springs, found just beyond this site, were called Ringbolt Hot Springs. The trail then climbs up a steep scramble and down to the next canyon wash. We went back out to the river and had our snack break on the beach in the sun. Pit toilets are provided here where many campers / kayakers were set up.

At the break, some hikers began preparing for the upcoming slosh through the hot springs pools by removing pant legs and putting on water shoes.

After the break, we hiked back up this wash to the slot created by the hot springs beyond. The scramble going up through the slot is slippery. Shoes get wet and fun is had.


At the end of these scrambles, the springs flow over a twenty foot cliff. The park service provides a ladder here and we began climbing up one by one. At the top of the ladder, there is a dryish area where everyone finished dressing down for the "hot springs traverse." There is no choice in this matter. Traverse or return from whence you came! So, all twenty hikers made their way through the ever hotter water interrupting the jubilations of three soakers in the last pool. One note: The small pebbles on the bottom of the pools are sharper than before the flood of August 2014! Bring water shoes.

On the other end, we climbed out and redressed. We felt like we had just gotten out of a hot bath. Rubbery legs and all!

Now in the Hot Springs Canyon, we began trudging up through the sandy gravel of a wide wash. Eventually, this canyon has many shortcut trails beside the wash that, thankfully, take you out of the deep gravel and allow for an easier climb.


There are several medium sized scrambles as the canyon narrows. The rocks are round and slippery so strength and skills are required. Almost half way up this canyon, a huge cairn was built and rocks are placed across the wash to deter hikers from missing the saddle return trail. The saddle was not our route for today so we continued up a trail that paralleled the canyon. We began crossing the canyon wash from trail to trail but our route basically continued up along the wash. We came to the huge canyon fork and kept to the left.

It is in this area that several rocks covered with petroglyphs reside. They are an interesting and unique display created by early Native Americans.

Next came the first of three large dry falls. This one is fairly easy to climb on the right side using hand and foot holds offered on the rough conglomerate.


The next dry fall is the most difficult as it is slippery to climb. The third dry fall has to be circumvented by climbing up a previous rock wall on the left. This one is the highest, most exposed and most fun! Once at the top, hikers circle around and drop into the canyon once again. (There is a rope at the dry fall that is not tied correctly. Please do not use.) After all twenty hikers placed their feet on solid ground once again, we exited the small canyon and followed the clear trail back over to the White Rock Canyon wash near the highway bridges. This is a fantastic hike that should be listed as a "Best Hike" somewhere! 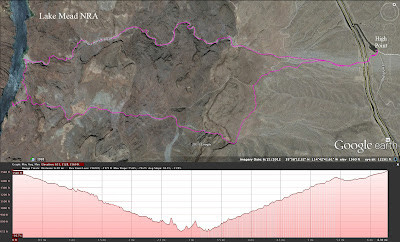 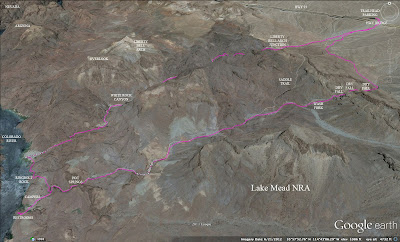