Rainbow Wilderness area of the Red Rock Canyon NCA + thirteen hikers + ten mile loop with gorgeous views + new trails for the club + a very respectable pace + three jackrabbits = A fantastic day on the trails for advanced hikers of the Around the Bend Friends! We started out at the trailhead located in the pine grove on the north side of Highway 160 near the Mountain Springs Summit pass. Our first order of business was to make our way up to Mountain Springs Peak via the regular trail that reaches the saddle and continues.

The group of thirteen were all strong hikers so we forged our way up to the saddle without stopping.

From there, our next stop was the fork junction where the right option leads to Windy Peak. The left option was our trail so after another small rest, we started out toward the escarpment rim.


Views from this section of trail are familiar but always delight us with views of the city's skyline, nearby sandstone peaks, and distant views of Death Valley. We continued our climb with determination. The climb to Mountain Springs Peak would be the major ascent of the day. After the peak, the hike would become more of an adventure. So when we summitted, we signed into the log book and enjoyed the view for a few minutes. And, it is a beautiful view in all directions. We, then, stowed the log book back in the cairn and began hiking down the trail on the other side of the peak along the rim.

We stepped out onto Snack Rock when we got there but didn't stay long. A few more feet on the trail and we would be stepping into unfamiliar territory. Couldn't wait!

We curved around the first new ridge of the rim and saw the large arch that we were expecting. Around the next rim ridge, we got a better view of the arch from the other side.


Next, we came to a trail fork. The right fork led down into the south part of Little Zion. To stay on the rim, we would need to take the more obscure trail out the ridge to the left. As we searched for trail clues, we found ourselves doing a small amount of scrambling to stay on the ridge. The limestone was very rough here but we were able to continue down without too much trouble. Finally, we arrived at THE CAIRN, a large cairn that is seen as a flagship for the Little Zion hike. Here, we junctioned with the Little Zion Trail. A right turn would take us down into the sandstone park and a left turn would take us on around the rim.

We followed the Little Zion Trail to the left hiking the rim trail around the top of Sandstone Canyon below. At the apex of the canyon, we could see Spring Mountain Ranch State Park at the bottom.

The rim trail continued climbing up and over the rim ridges. Some of the ridges were quite steep but we were never very far from the abyss beyond the rim.


We passed the cairn denoting the Little Zion wash junction and continued over another couple of ridges. When we saw a second very large cairn, we first thought we had reached the trail junction for the Mountain Springs Trail so we stopped for our lunch break. We enjoyed the view below us of Sandstone Canyon and beyond. And, Spirit Peak was just up ahead. When we brought out the GPS at the end of the break, we saw that we were not yet at the trail we sought. So, ... another three steep ridges to climb over finally did the trick. There was no huge cairn that we saw to mark the occasion but the trail down could be seen as it headed down a ridge adjacent to the wash.

Right away, we loved the trail! It is a well worn trail that seemed to be often used by horses and riders.

In this area, we finally saw our first large wildlife ... a humongous jackrabbit!


The trail switchbacks down the hill and is marked with cairns when it starts mixing in with the wash. We had no problem following the trail all the way down to the Rainbow Springs area. On the way, there were several exclamations about how nice the trail was to follow from many of the thirteen hikers. The trail seemed to have been there for a long time, yet, it was not previously on our regular route to anywhere. When we danced into the Rainbow Springs area, we connected with part of the dirt road for only about fifty feet. The trail, then headed off the road up to the left.

Right there, someone had erected a small fence that was easily circumvented to the left by hikers. We assumed that the fence was there to deter motorized vehicles.

Now, the Mountain Springs Trail began its slow descent across the base of the back of the escarpment.


The "descent" involved constant regular undulations as it crossed the terrain that is covered with washes and arroyos running perpendicular to our direction. Ever since we started down from the rim, we had increased our pace and now, the pace continued strong. At around 7.4 miles into the hike, we crossed the large gravel wash that we have used in the past for the Mountain Springs Peak Loop hike. Our trail was still very clear. The next hiccup in the trail was a steep ridge to climb up and over.

After the hiccup, the little town of Mountain Springs, Nevada came into view. The sun was in our eyes preventing nice photos of what was ahead of us.

Finally, we came to the end of the trail at the springs that flow above the town. We followed the road to the left and dropped down to the pristine agave roasting pit seen in the upper left corner of the photo below.


After passing the pit, we took a hard right onto an old road. We visited another very large roasting pit (lower right corner) then continued on the old road until we reached the farm houses. Finally, we turned to the left to pass the horses in the photos below and waltzed into the trailhead parking area with 9.7 miles under our belt. This hike is a "keeper." It's great on a cool clear day! 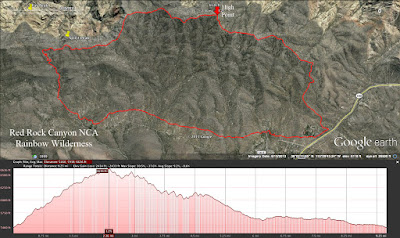 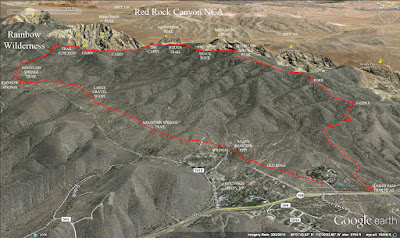 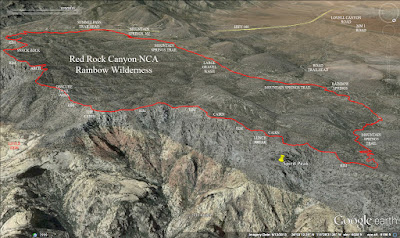 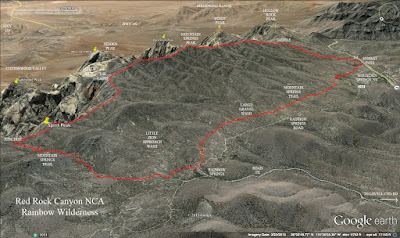