It was the shortest day of the year and Old Man Winter came in via a dreary cold day. Twelve hikers drove all the way up Northshore Road to mile marker 41 (Blue Point Springs) in the Lake Mead NRA with hopes of improving the day. As we exited our cars, it was immediately clear that the predicted warm day in the 50's would probably not materialize. Jackets, gloves and scarves came out of the packs and we started hiking up next to the spring drainage from the picnic tables. When we neared the palm tree growing in the spring water, we crossed over to the other side.

Tamarisk is growing in this area and threatening to take over further upstream.


From here, we found one of many game trails and followed it out toward the redstone we could see in the distance. This hike begins within the boundary of Lake Mead NRA. After hiking through a band of BLM Land, we begin roaming around just inside the corner of Valley of Fire State Park. It is inside the state park that most of the redstone formations are located. As we hiked toward this area, we had beautiful distant views all around us but it wasn't until the sun started to break through the clouds that the red rock began to "pop." The game trail took us in and out of the arroyos as we crossed the desert.


The first bit of redstone that we approached had a small arch and a larger area with caves, columns and holes.

The cameras came out and we climbed around the larger rock. We were starting to warm up a little.


The sun started to break through and we quickly took several photos as we hiked across to the next set of red rocks. Another arch then we came to the tall Virgin Peak Arch seen in the photo below. We scared up a jackrabbit from behind the arch then dropped down to tour around the area. There are many arches, holes, tunnels and columns in the circle we made. The last arch was the Tea Kettle Arch. Okay, yes, we named all of these formations. That's part of the fun!

Next, Chuck and Joan took us up to Snack Hill, a sort of high point in this area. We took our break while enjoying the views around us. A day spent outside in the wilderness on a dismal cloudy day is worth, at least, three days inside on sunny days. We had all removed outer jackets and knit hats by now. The temperature had not reached the 50's but it wasn't too cold anymore. So, after the break, we dropped down to hike around a very large rock outcropping and headed over to an overlook.

The large rock formation had many many holes, etc., and we saw what was probably a large bird's nest in one of them way up high.


A trail led us up onto a plateau where we crossed over and peered down into a very very large wash. This is the main wash that emanates from the main acreage of Valley of Fire. We marveled at the canyon below then returned to the trail on which we had arrived. We passed a large cairn that was protecting a benchmark as seen in a photo below. We continued hiking around the large holey rock outcropping by dropping steeply down. Here, we found the bones of a bighorn sheep's head and spine.

We left it where we found it and we wished everyone would.

From here, we followed a small wash then climbed steeply out.


Another smaller drop took us to a very interesting sandstone column as seen in the second photo above. From the front, the column appears to have a cow's head at the top. Colorful sandstone painted the walls of this area and we hiked out still another wash. We were being careful to not walk on the cryptobiotic soil on either side of the many washes to help in preventing soil erosion. To our left, we approached Mammoth Rock as seen in the photo below.

Three hikers climbed the "mammoth" and sat on its head for a "mammoth-riding photo opp."


A drop down another nearby wash took us over to the huge Wave Rock. A little further through the desert on game trails took us to the Bird Rock. We crossed the arroyos further downhill than when we were on our way out. We crossed back over the Blue Point Springs drainage and saw our cars waiting for us. This hike keeps your interest with the natural beauty provided. It's all about arches and other formations. And, of course, the gorgeous views! 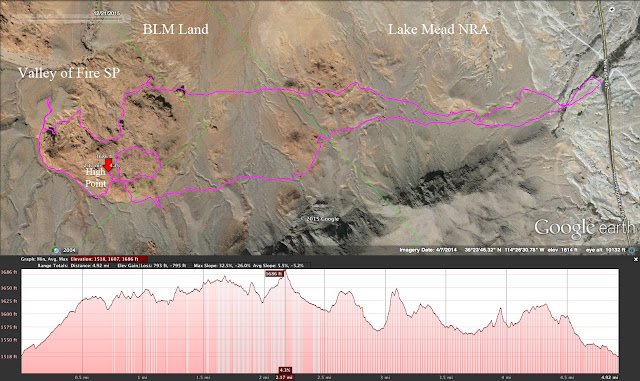 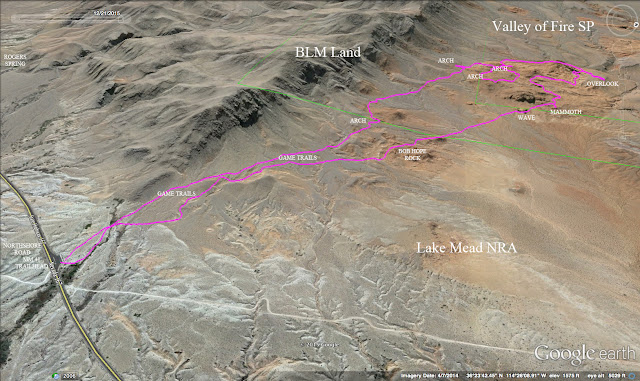 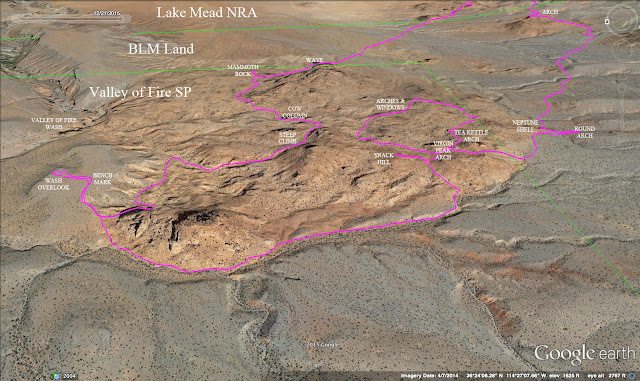