One of Lake Mead NRA's most popular trails is White Owl Canyon. There are three ways to hike this canyon that is sometimes occupied by a large white owl. One is the short out and back hike from the 33 Hole turnout off of Lakeshore Road. The second way is a 5 mile loop beginning at the Old Las Vegas Marina (now closed) and using a part of the River Mountains Trail for the return. The third way is the route we took today. It is an 8 mile loop that begins at the old marina, takes the Shoreline Trail over to 33 Hole, hikes through White Owl Canyon, slogs up a wide gravel wash, turns down another more narrow wash, slithers through Hippie Canyon, then it's back to the marina.

Twenty hikers came out for the moderately strenuous hike. We parked at the end of the old dry boat ramp and started out the trail to the right. Some of the hikers preferred to reduce the amount of scrambling required today.

Therefore, the coordinator accommodated these hikers by taking a side trip up into the lower portion of Hippie Canyon for a "look see" adding about half a mile to the day. There were no birds in this canyon first thing in the morning.


We returned to the Shoreline Trail and headed out to the Las Vegas Wash that was teaming with rapids as it circled around the small pinnacle island. We stepped off the trail here to look at the water and get the second photo above. The wash has become more narrow every year and, this year, it was amazingly clear how much lower the water line is. The area where there are usually a lot of fishermen and water fowl was mostly dry. We didn't even see a coyote around. No birds, no coyotes. Finally, in the distance, we found a bit of open water.

The group climbed up on the plateau outcropping that was surrounded by water only a few short years previous to this. Most of the group hiked around to the other side of the hill and returned.

From here, the route picks up the trail that connects down from the 33 Hole turnout and we were on our way to White Owl Canyon.


As we started to be surrounded by the canyon walls, we encouraged the twenty hikers to be quiet so as to not scare away the owl if, in fact, she is there. At any rate, there was no owl up on the shelf when we got there. There was, however, a nest right where it always is. We hiked through the canyon that was once underwater marveling at the rounded stone. The first culvert we came to went underneath Lakeshore Road above.

After this, the canyon stays pretty narrow and interesting until we came to the second double culvert that runs under the River Mountains Trail. Half of us used the right culvert and the other half used the left.

We came out the other side and went to inspect the bighorn sheep bones that used to be placed behind a rock. The only part left was the spine.


From here, there is a long slog up a very wide gravel wash. There are a couple of places where it narrows and provides a little entertainment in the way of dry fall scrambling. But, most of the way up, we were entertained by guessing which pathway was the shortest to the junction! Finally, at the junction, we climbed up to the rocks on the right corner and took our snack break. Our view was expansive with Bighorn Peak looking over us from the left. After the break, we carefully found our way down into the wash beneath us.

This hillside is very loose with large rocks. Another way that is easier is to go down via the white wash instead of the hillside.

Once in the wash, we began our descent. At first the wash was wide but it narrowed quickly.


There was a little bit of scrambling here and there but the real test came when we had to go up and around a small treacherous slot canyon. The writer has negotiated the slot canyon once before but has since decided that the up and around is the safer way even though the slip and slide that you have to negotiate on the other side is a "bit of fun." We all got over the hill without any broken bones and continued down the canyon. It was still narrowing and widening regularly.

We were descending at a strong pace when, off to our left, we heard a very irritated rattlesnake!

The snake was on the ground under the carved out rock wall. It's 3 inch rattle was shakin' like a leaf. And, it's head was locked and loaded. After we all got a good look from a safe distance, we left the poor little fella alone.


At the third culvert (leading back under the River Mountains Trail), we divided into two groups of ten. One group climbed up to the paved trail to find an easier way back to the cars. The other group got their thrills scrambling through the upper portion of Hippie Canyon before circling the hill to find the cars at the marina. Inside the canyon, we saw 2 ravens up on a ledge that had just warned off an owl. Not sure what kind of feuding the neighbors were experiencing but ravens do know how to bully owls! This version of the hike is taxing due to the long uphill gravel wash but we all had a good time today. 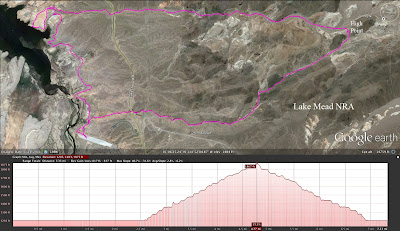 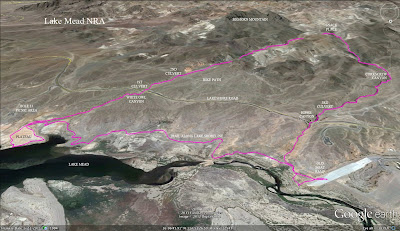 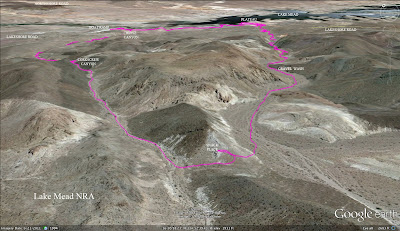