The Fern Canyon Overlook hike begins at the North Peak (Sandstone) Trailhead on Rocky Gap Road. There are three ways to get there: scrambling up the wash; hiking up the road; and, driving 4WD/high clearance vehicles up the road for approximately 2.5 miles. Today, we were fortunate enough to have 4 vehicles that could do the job ... and, oh, what a job! Rocky Gap Road is in the worst condition that it has been in for years. So, after an hour of driving between our meet spot and the trailhead, eleven hikers got out of the cars and rebuilt the dilapidated trailhead cairn.

The trail crosses the wash and begins an "in your face" steep climb up along an intermediary ridge that runs all the way up to the top of the main ridge.

The first half mile of climbing follows a trail in the limestone. During this 900 foot elevation gain, we took a couple of breaks to catch our breath.


When we started into the next half mile of sandstone, the group separated into two. The larger group went to the right of the ridge and did their climbing later. The smaller group forged straight up following the more traditional trail in the sandstone. Both groups, then, combined to finish the climb straight up the sandstone on a cairned trail. Finally, the large Gateway Cairn came into view. We walked through the gateway and followed the trail that led to the largest rock that could be seen up on the ridge in front of us. This is Dragon Rock.

The group had become a little spread out but we all gathered at Dragon Rock for a breather. This was the high point of the hike. The remaining part of the hike was the icing on the cake.

We could see the Overlook Trail on the other side of the ridge below us. It ran right along the limestone/sandstone line below the true rim of the Red Rock Canyon NCA escarpment.


Dropping down the slab, we connected with the trail. The trail is marked with cairns and it is easy to follow. There are a couple of places where the trail forks offering two choices of routes. When in doubt, it is best to stay high. The views are the same and it is safer. As you hike along the trail, the tops of the escarpment canyons fall precipitously down to your left. At the same time, views of Las Vegas and the Calico Hills open out for a wide display of color. Although we had seen a distant view of Bridge Mountain from Dragon Rock, the peak hides behind other peaks as you hike around the first part of the trail.

Bridge Mountain then appears quite suddenly as you go around a corner to the right. It's "bridge" can be see in the lower right corner.

Behind us now, we could see the little North Peak (Sandstone) on the end of the ridge we climbed over at Dragon Rock.


The trail starts out in the limestone but as you circle around the upper reaches of Ice Box Canyon, it dips into the sandstone. Following the cairns becomes more important here since the trail balances atop a steep slippery slope. We passed Gorilla Rock on the upper trail then came to the top of Ice Cube Canyon, a smaller canyon that leads off of Ice Box Canyon. Our trail hugged the wall at the top of the smaller canyon and took us up a slope to another expansive area of sandstone. There are remnants of a campsite here.

We looked below in the area between us and Bridge Mountain to see a large tank. Even though there is a lot of water in the tanks of Red Rock presently, this particular tank was dry and had grass growing in it.

We continued circling a high point of sandstone around to the left. This is a much nicer route to reach the overlook than what we had done previously.


Et, le voila! The Fern Canyon Overlook appeared at the Bridge Mountain Trail junction. This is a great place for a nice snack break and we safely meandered around on the cliff that rises approximately 1000 feet above the canyon floor. As we enjoyed the view, all the peaks were named and routes from below were revealed. And, promises of climbing Bridge Mountain in the near future were made. Perhaps now is not a good time. We passed several snow patches on the north slopes on the way over. Eventually, we packed up to go.

This time, the coordinator was pushed to the front and she began following cairns for the upper route. (That is, the route that is furthest from the abyss!)

We circled around the canyon tops and took a few more photos but mainly, we concentrated on learning the trail.


Back at Dragon Rock, we took a water break. Here, our beautiful windless day changed. A stiff but weak breeze began threatening our hats as we found the Gateway Cairn to begin our steep descent. All concentration was put into a safe descent on the very slippery and steep ridge trail. Even with our best efforts, there were at least 4 falls recorded. This isn't unusual for this trail. At any rate, it was a beautiful hike and it ended with an impressive drive down Rocky Gap Road. Yep, we bad. 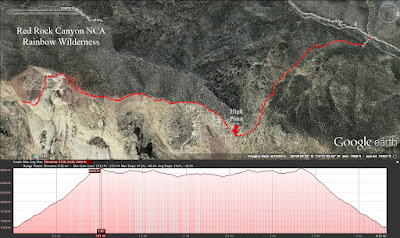 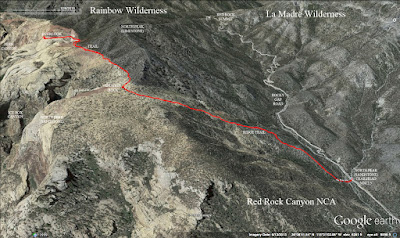 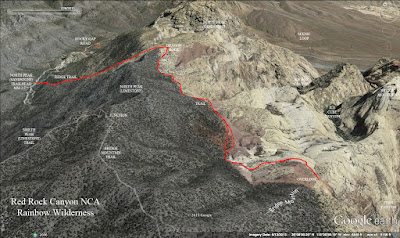 Posted by Las Vegas Cockapoo at 11:30 AM