The Around the Bend Friends Hiking Club of Las Vegas made its second road trip to Elko, Nevada (the gold mining capitol of the U.S.) for three days of hiking out of Lamoille Canyon in the Ruby Mountains. The club members were divided up into three groups according to pace levels and the following photo and narrative review was made by only one of the groups. Photos and narrative were provided by Lettie G. and Mike OC. Thanks guys! 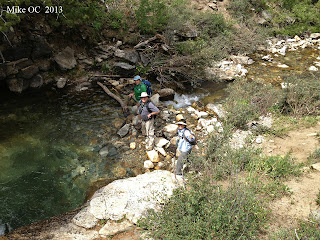 Our first hike was up Thomas Creek. Eight hikers started out at the campground and hiked up the canyon to the waterfall. The meadow below Mount Fitzgerald was our destination. The large beaver dam was washed out by a storm on the 4th of July. We crossed the creek several times as we made our way up the canyon. 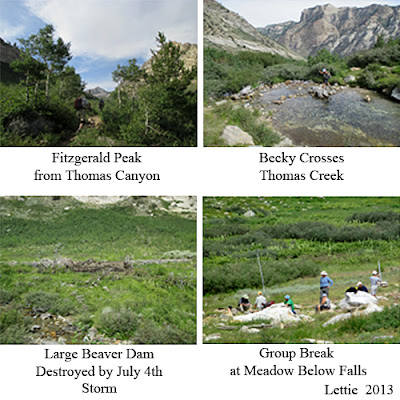 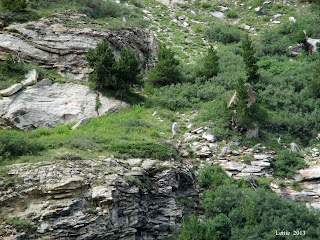 We took our break at the end of the meadow and relaxed as Fitzgerald Peak loomed overhead. Mike OC crossed the creek and made his way to the waterfall. The day warmed up as we made our way back down. Mike OC waded into one of the large pools and then jumped in. BRRRRR! ~ Lettie 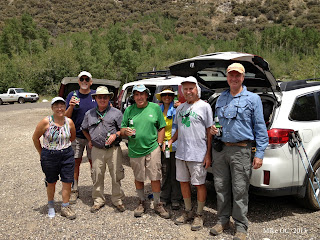 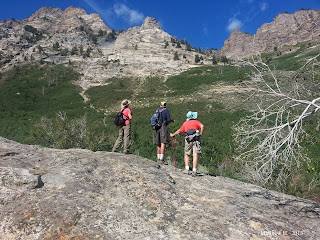 The moderate paced group did Thomas Canyon the next day. These last three photos were taken by Matthew H. on their hike. 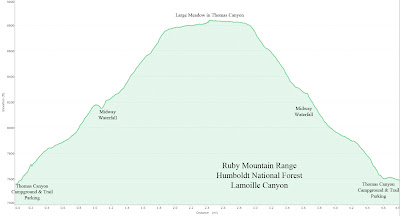 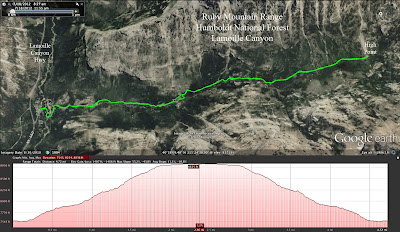 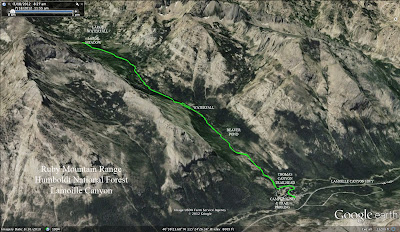 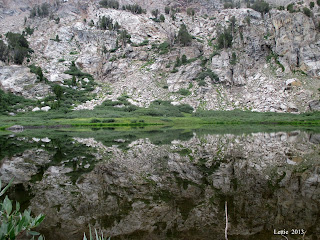 It was a cloudy day as we left the motel hoping that we would beat the chance of thundershowers. Eight hikers parked at the lot at the end of road and looked up at our destination, Liberty saddle. We reached the Dollar Lakes and enjoyed a brief break. There is a beaver lodge in the far left of the photo to the left and the cliffs above are reflected in the lake. As the group moved on, Becky spotted a dear on the other side of Dollar Lake. 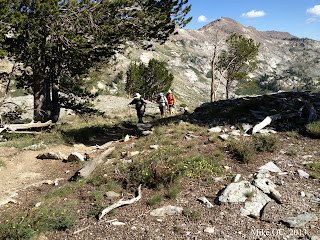 The rest of the hike to Liberty Lake was uneventful as we moved quickly to beat any chance of getting caught in rain. Drizzle and wind descended upon us as we were taking our break at Liberty Lake overlook. We all put on our jackets, hoods and gloves and 5 of us made our way back as 3 others descended down to Liberty Lake. Once we got back to Lamoille Lake, we decided to circumvent Lamoille Lake because the drizzle and wind had abated. Steve made his way up to the glacial ice on our trek around Lamoille Lake as seen in the last photo. ~ Lettie 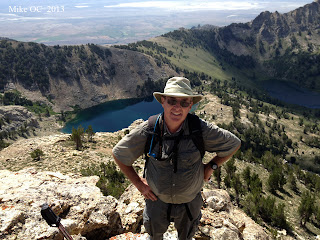 Because the weather had been so cloudy and one hike (Island Lake) was closed off for repairs, we decided to repeat Liberty Lake and Paul, Steve and Mike OC wanted to climb up the rocky slope to the peaks to the right of the saddle. We were only 7 today but the weather was gorgeous. Becky and I encouraged the men to go and not wait for us. 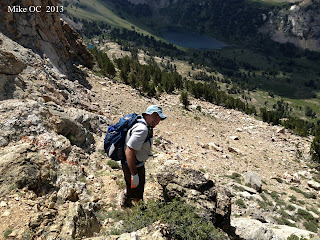 Larry and Richard hiked past Liberty Lake; Steve, Paul and Mike OC climbed up to Liberty Peak where they signed in and Paul found a geo cache. Beck and I leisurely hiked up to the saddle and then down to Liberty Lake. With radio communication, we all agreed to hook up at the saddle before descending down the mountain for the last time. ~ Lettie

GPS Information for Liberty Lake on the Ruby Crest Trail 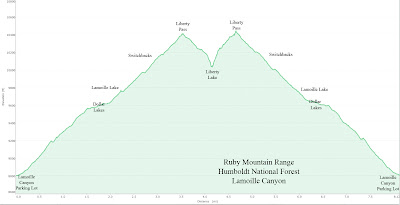 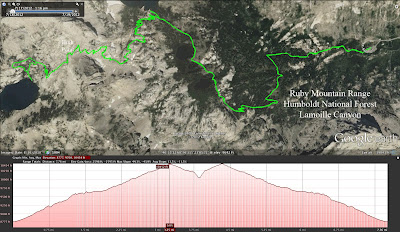 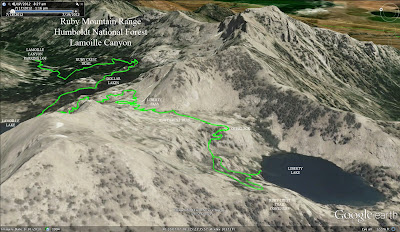 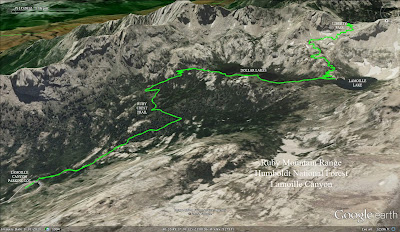 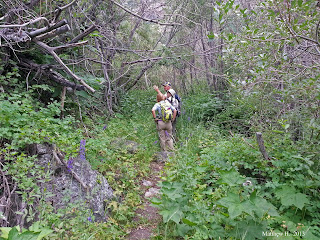 The largest group of the three were moderate level hikers. For their third hike, they climbed into the Right Fork Canyon. It began at the Lion's Camp near Lamoille Canyon and hiked into a forest then up a steep canyon. Matthew H. sent me these photos of the hike. 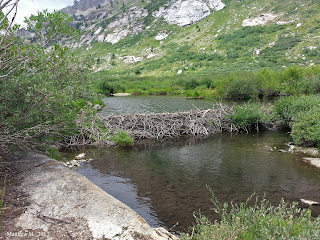 The beavers in Lamoille Canyon seem to be a very busy bunch! The beaver dam to the left looks pretty solid. With the exception of these photos and captions, there was no other information sent on this hike.

Posted by Las Vegas Cockapoo at 10:27 AM