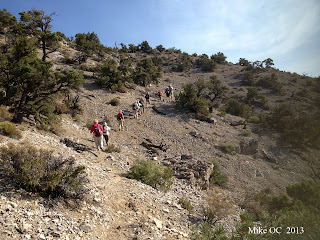 Fourteen hikers gathered at the trailhead located at the Mountains Spring Pass off of Highway 160 early this morning for our third and final hike of a series from this point. We hope that the next entry will be reporting about a hike back in the Spring Mountains NRA as it appears that the wildfire has been quenched up to 85% and they are allowing residents and hikers back into the canyons and mountains. Nevertheless, here we were ready for another early and fast hike in the desert trying to beat the heat. 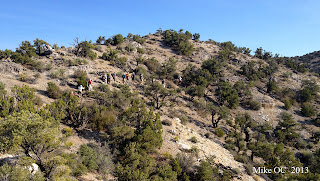 With Kay at the helm, we hiked up to the trail junction saddle without stopping and gathered for a walk across rolling terrain to the left. At the Windy Peak trail junction, we beared to the left and headed off on the escarpment rim trail that circles around on the ridge of the limestone. The views on both sides of the ridge were gorgeous in the morning light. Sadly, the writer had a dead battery in her camera but, never fear, Mike OC stepped up to save the day with a few photos of his own. 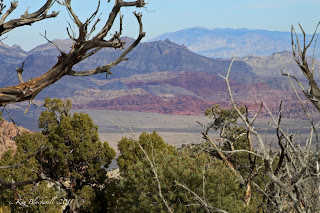 After circling around on a lower trail to the right, we again connected with the original Mountains Spring Peak trail and following the undulating ridge all the way to the highest limestone peak in the area which lies above the ridge that leads out to Black Velvet Peak. From Mountains Spring Peak, we could see a hazy view of the Strip and the Calico Hills. After signing the log book, we continued around the escarpment rim trail a little further until we reached the cliff rocks that serve as a great break area. 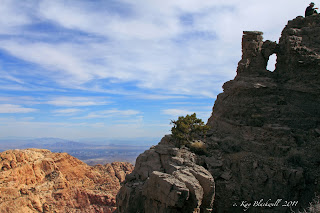 A few of the hikers decided to stay near the summit so that another climb was not necessary but a few of us climbed Mountains Spring Peak a second time for the return! From there, we followed the original trail all the way back to the cars using a true out and back route after we passed the odd variation we made on the way there. When we reached the cars, the sun was heating up the trail and we were glad to be done a little over 2.5 hours after starting out. The hike was 5.5 miles with 1800 feet of elevation gain. 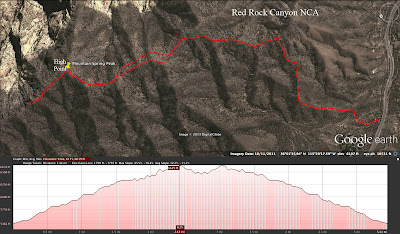 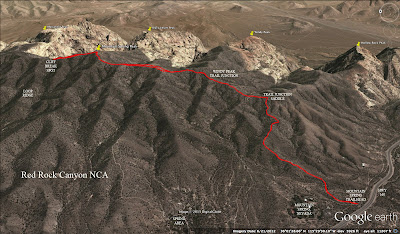