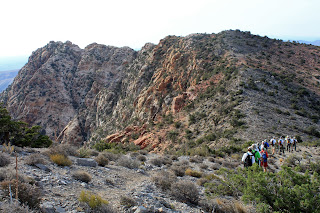 Smoke tinged the air as the sixteen hikers on the sixteenth of July started up "heartbreak hill" for the second time in a week at the early hour of 7am. We huffed and puffed up the hill without stopping as challenged by the coordinator du jour, Tim. The real challenge, today, would be to get the whole hike in before the temperatures rose above comfortable. There would be 5 miles to cover and 1883 feet of elevation gain to climb before the strenuous workout would be completed so there was very little time to waste. 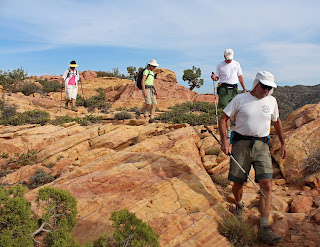 We gained the saddle junction in less than thirty minutes, took a very small breather then headed off to the right on a trail that continued up, then flat, then up, then flat, then down ... well, finally we stopped to gather again near where the limestone gave way to yellow and purple sandstone as seen to the right. The trail follows the ridge for a little ways then drops down to the right to edge around some rocks. On the left side of the ridge, there is a cliff and dangerous scrambling to contend with. Safer to stay on the right and deal with two steep down and ups. 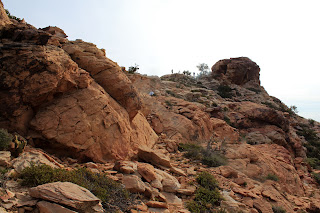 Following the cairns and a slight trail, we accomplished the two down and ups then arrived to find the view seen to the left of the peak knob called Hollow Rock. If you climb to the top of the knob, you can see that the rock is, indeed, hollow in the middle. Today, there were several hikers that made it to the top while the rest of us sat at the bottom for our break. Views from this perch are beautiful and expansive as seen in the first photo of the entry. In interest of staying on the cool side of Mother Nature, we soon left Hollow Rock Peak and headed back through the down and ups again. 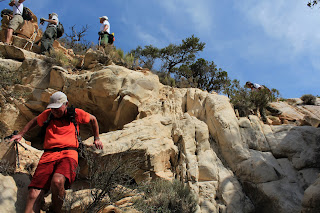 When we reached the limestone / sandstone line again, we turned down to our left toward the sandstone wash below for the finale return of the hike. At the bend in the wash, about half of the hikers chose to hike through the loose rock on the hill above the wash. The other half began scrambling down through the middle of the wash. There is only one waterfall that is difficult to negotiate and there is an easy up and around for that. When the wash takes another bend, we took a small trail up to the right that led to the dirt road above. Another mile to the right on the hot dirt road and we were back at the cars. Great Workout! Great Fun! 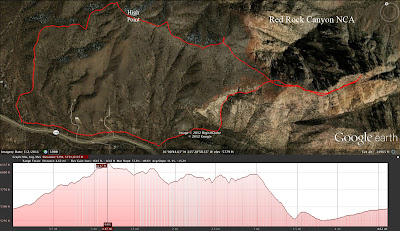 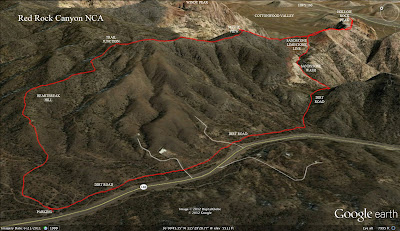