It was a thrilling morning for eight Tuesday hikers as we faced a 50% chance of "heavy rains and thunderstorms" in the Spring Mountains NRA. We arrived at the Trail Canyon trailhead and stared the wet threat in the face. Up the trail, we went with two of the slower hikers getting a head start while the cars were being arranged for the point to point hike. So far so good. The sky was blue and the air was so refreshingly cool. Even with the twenty minute delay, the faster hikers converged with the two slower hikers about fifty yards from the saddle as photos were being taken of mule deer in the area; a rare sight for this neck of the woods. In the end, we counted around 8 deer in the area. They seemed slightly confused and we assumed that they had been displaced by the recent wildfire; still not sure which way to go to escape us.

After a short breather on the saddle, we started down the North Loop Trail and took a hard right down the steep scree slope. At this point, all washes would funnel into the upper reaches of Fletcher Canyon so we carefully negotiated the scree using a couple of small trails and found the huge boulder that is the landmark for the beginning of the Fletcher Canyon trail. Just beyond the boulder to the right, we found the first flowing water as seen in the first photo of this entry. The trail leads down the canyon from here.

We followed the wash, in and out of it, by a small trail passing several columbines. We were almost giddy with the fact that the weather was still holding out for us. The water in the canyon was sparse which was surprising since there had been so much rain in the past week. When we reached the large ponderosa sitting atop a ten foot waterfall, we knew we had found more familiar depths of Fletcher and the trail became even more clear. We followed the trail quickly with the threat of rain still haunting us. There were, after all, a few dark clouds already gathering above.

Once we did the rabbit hole "dance" at Obstacle Rock, we breathed a certain sigh of relief. At this point, we knew there would be no flash flooding on our hike today! (Although, that would have been pretty exciting!) We took a relaxed break below Obstacle Rock then made quick time hiking out the remainder of Fletcher Canyon. The hike was almost six miles with 1600 feet of elevation gain and 2300 feet of elevation loss. Looking up toward the Trail Canyon saddle, we saw that rain had most likely begun!

Note: The landscape has changed in Kyle Canyon due to the fire, especially down near Harris Springs Road where the fire crossed Kyle Canyon Road. However, our mountains are our mountains once again and we are very thankful for the work that the firefighters did for us. There are signs along Kyle Canyon Road thanking them for their work, as well. As one sign says, "We love our mountain." 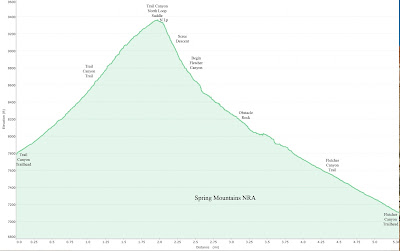 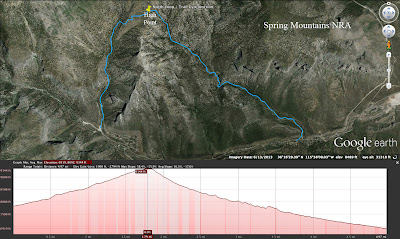 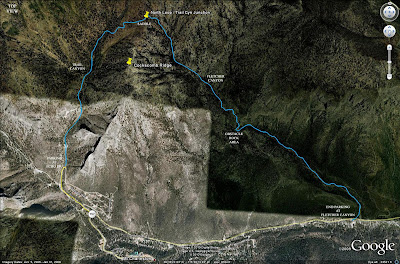 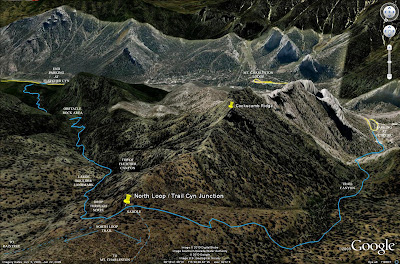 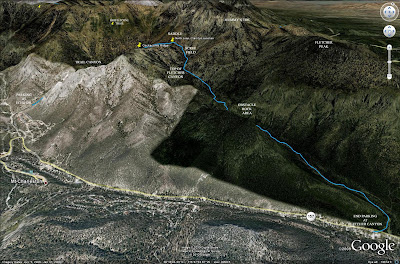 I love you little old pilgrims 'Kay most of all' but I worry about you.