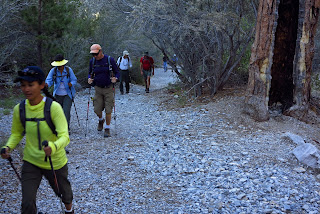 Fourteen hikers started up Trail Canyon in the Spring Mountains this cool morning for another Wednesday "training" hike. Although the point of the training hikes led by Jon Lubinsky and Larry Shahan was to finish with a climb to Mt. Charleston Peak, it is appearing like that may not come to pass. The North Loop Trail is still closed at the Trail Canyon Saddle due to the Carpenter One Fire that left the South Loop Trail in shambles. At this time, it is not known if the North Loop Trail will open before the end of summer. 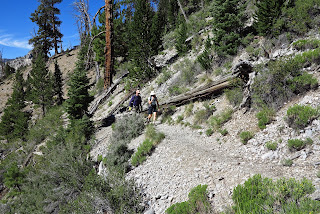 The wispy clouds that brushed past Cockscomb Peak added to the beautiful morning and the climb up Trail Canyon was relaxed. No one was trying to break their record ... or, at least, no one in the rear of the line of hikers where the writer took up residence today. We took a small break at the saddle then continued over onto the North Loop Trail. The scenery on this section of trail is always very photogenic as there are views of several peaks from this vantage point. We could also see quite a bit of the fire damage on the South Loop Trail across Kyle Canyon. 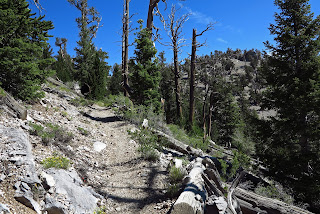 As we neared Raintree, we could see Fletcher Peak and its approach ridge to our right. After passing Raintree, the group would circle around and come to the ridge from the left. We stopped at Raintree to wait on the last hikers then the writer decided this was as far as she was going to go today. As it happened, there was another hiker who missed the Fletcher Peak Trail junction and returned without summiting. Therefore, twelve out of the fourteen hikers managed to achieve the whole 9 miles out and back to Fletcher Peak from the Echo parking lot. The writer took her time on her return and took a lot of photos that she doesn't always have time to take. The wayward hiker left his name card at Raintree to notify the rest of the group that he was headed down. And, the remaining twelve hikers came down forthwith exclaiming about what a workout the nine miles were. Along with the distance, there were 3445 feet of elevation gain. That's quite a hike! ... But, still a gorgeous day! 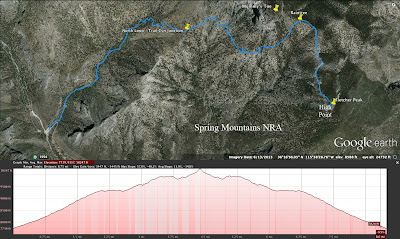 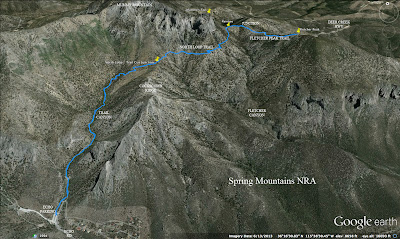 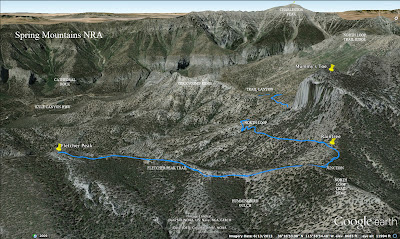