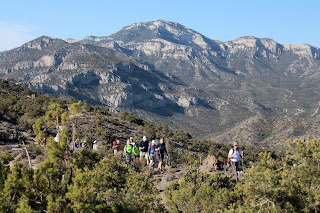 There were twenty-four hikers who arrived at the meeting place very early this morning, most of whom were having withdrawals from hiking due to the huge wildfire in the Spring Mountains. The grief we feel about the loss of much of our mountain playground was palpable, however, dealing with our grief by finding a way to hike (very early in the desert of Red Rock Canyon) was what we did. We were all very happy to be out on the trails and our steps were weightless ... for a few minutes ... as we hiked our way up "heartbreak hill" which begins the Windy Peak climb at the Mountain Springs Pass on Highway 160. Behind us, Mt. Potosi watched over us as we found the saddle, gathered and proceeded on the trail to the left. 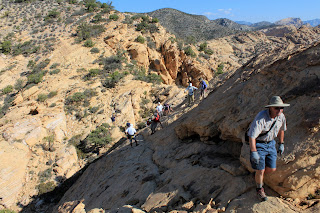 Between the saddle and the turn off on the Windy Peak trail, there is approximately one half mile of rolling terrain. Between the turn off to the right and the sandstone portion of the hike, there is another half mile of rolling terrain that finishes on a down grade that connects the limestone and sandstone of the Wilson Ridge in the Keystone Thrust. At the bottom of the hill, after stepping into the sandstone, every hiker has to contend with a steep slightly exposed rock climb to enter onto a beautiful wide sandstone expanse. 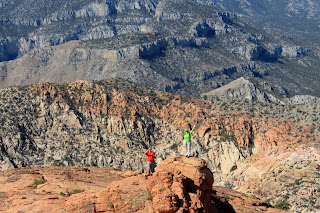 There are a few cairns showing the way but, basically, if the hiker stays near the top of the ridge (be careful of the cliffs on the left side), he or she will find the peak. Today, we had several newbies on the hike and it was fun to just enjoy the camaraderie. To the left, Jan and Tim found a rock to perch on down below the peak. Several other hikers explored out to the end of the plateau. We all wrote our names in the book and had a little to eat or drink. The time was still pretty early and the sun was still on the cool side of its arc. 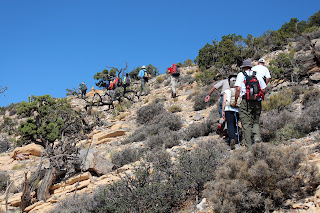 It was starting to get a little warmer when we finally ... reluctantly ... started back. On the way, we saw a black girdled lizard on the sandstone. The pace back was perfect. We divided, as usual, at the saddle. Some hikers went down the way we came up and the rest went down the burned ridge to make the hike a partial loop. In total, the hike is 5 miles with 1700 feet of elevation gain. 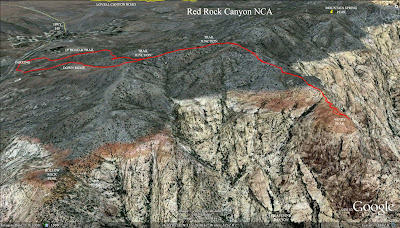