Eight hikers went out to Lake Mead NRA for a Super Tuesday hike on Rainbow Ridge, a new hike for the Around the Bend Friends club. We were definitely off the beaten path but, oh, what a beautiful path it was! Our trailhead would be the well known parking area at mile marker 16 on Northshore Road. We parked here and began our adventure on the crossover trail that leads west to Lovell Wash. The morning was already warming up and the colors around us jumped in the low early sunlight.

We crossed Lovell Wash just south of the Rainbow Canyon junction and began climbing the hill in front of us. This is the eastern terminus (and the lowest elevation) of Rainbow Ridge, a roughtly 2 mile ridge that lies to the north of Northshore Road between mile markers 14 and 16. Our climb brought us to a couple of layers of limestone that we had to surmount. The terrain around us became very steep, very quick. The northern side of the ridge was the cliff side as it dove straight down into Rainbow Canyon.

When we reached the ridge, we began our ridge hike which involved several smaller false peaks. Every time we thought we had the peak in sight, we would soon learn that there was another taller peak ahead of us! Even though this was a little frustratingly humurous, the ridge offered many points of interest and kept us distracted from the many ups and downs. The "tilted sidewalk," the long low arch, the moonscape and the "leap of faith" along the razor sharp ridge were all complemented with amazing views in every direction.

Somewhere just before the "leap of faith," we spied a bighorn sheep on one of the last false peaks. At first, we thought it was a cairn but then it moved! We never saw it again. (Another bit of wildlife for the day: We saw a coyote on the road as we drove out.) Then, finally, soon after the photo to the right was taken, we reached our last small climb to the real peak. It turned out to be the last peak on the ridge! Difficult to believe, but the views were most beautiful from here!

We took our break and photos but, again, no log book ... next time. A hugely steep descent stared us in the face! We retraced our steps down the peak then turned to our right (south) and began a very slow deliberate descent down to the wash below. We were able to find solid slab limestone with chert for most of the way but, still, it angled at around 60 degrees, give or take. Nevertheless, we made it safely down and ended up in a wonderful wash that we dubbed Little Rainbow Canyon.

The rock and mineral vein "action" within the wash made the hike through the little canyon very interesting at every turn. Points of interest included an obvious bighorn sheltering area, a large shallow cave, two challenging dry falls and shiny gypsum layers under our feet. The rock turned from white to red after the second dry fall as we got closer to Northshore Road. Little Rainbow Canyon isn't very long but it is definitely worth a visit.

When we approached the road, we saw that an old culvert served the wash. The culvert was large enough to walk through without having to bend over too much so we took advantage of the tunnel. On the other side, the rock and dirt were colored a bright red orange. This wide wash is the top of Calville Wash, a large wash that empties into Calville Bay at Lake Mead. Just before the wash squeezed between two red walls, we turned left into another wash. This wash traveled roughly parallel to the road and below Ejection Seat Ridge.

We could have continued along this wash almost all the way back to Lovell Wash, however, we wanted to take a look at a colorful dry fall back on the north side of the road. So, near the mile marker 15 turnout, we exited the wash to cross the road and drop back into another wash. From there, we hiked up a little ways toward a landmark pointed rock outcropping. Soon, we dead ended in a colorful alcove where water had carved the sandstone.

Exiting the alcove, we found a ramp to climb out but it was not the ramp that led to a good trail for which we were searching. We ended up climbing back up to the road as it was clear that our energy supplies were low. The last mile was hiked along the highway as it was the most clear way home.

Today's hike rang in at 6.5 miles with around 1900 feet of elevation gain. We enjoyed the Lake Mead NRA beauty for 5.5 hours. 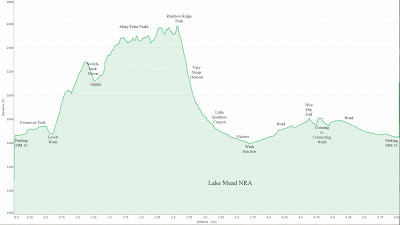 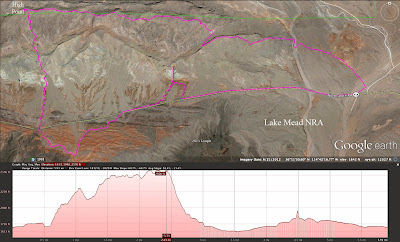 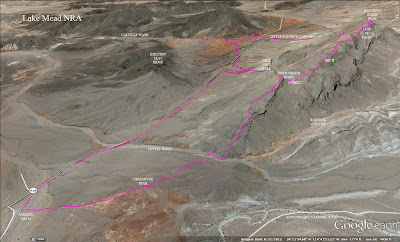 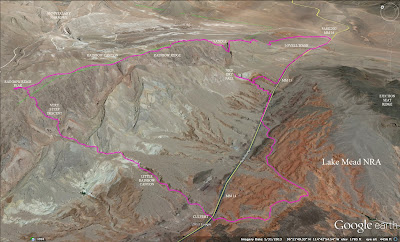 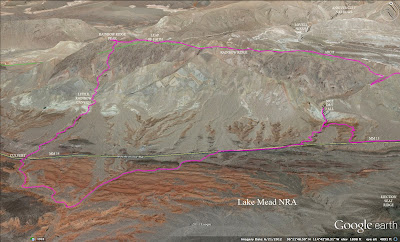 Posted by Las Vegas Cockapoo at 9:00 AM