Today's hike took fifteen hikers up to Valley of Fire State Park. This is a 1 hour drive north on I-15 with an exit at Valley of Fire (Exit #75). After a slow drive out this road, through the park fee booth and straight out almost to Northshore Road at Lake Mead, we came to the Elephant Rock parking area on the left side of the road. Our route du jour would be Two Elephants Loop, a refinement of Brian's "Valley of Fire Scramble" or "Sitting Elephant Loop" that he created in December of 2010.

Here, we gathered to begin our hike following a trail to Elephant Rock which led up beside the road. Not much time for photos as Brian, our worthy Valley of Fire leader, believes in very speedy warm-ups!


We followed the trail around until we got to the back side of the Elephant Rock hill. Then, we turned left into a wash and began climbing to our first high point. Before the hike was completed, we would have five high points under our belts. All around us, there were red sandstone rocks with holes and indentations. At the top of the first climb, we could see the sand dune across the desert on which we would finish our scramble.

We took a breather here then proceeded down and up to our second high point climb. At the top of this climb, three hikers surmounted the real neighboring peak (as seen in the photo above) while the rest of the group watched and took notes.

The third high point was, indeed, the most difficult so far. Could it be because we had just climbed three high points back to back to back? Perhaps. Nevertheless, the view of Silica Dome had gotten increasingly closer and Valley of Fire was temporarily opening up to show some of its famous colors. After this climb, we had a bit of a respite in front of us in the form of a gentle traverse. This is the second place where the refined route made a small change from three years ago.

Instead of continuing all the way into the Valley of Fire Wash, we opted out of passing by the collapsed arch and made our way straight across to the next ridge. Still scrambling.

As we climbed up, down and around red rock, we turned a corner and saw one solitaire small bighorn sheep with little horns. We called her "Little Horn." Of course, we knew that other bighorns were probably close by and around another corner, we saw three together. They posed for us up on a hill. Beautiful!

We hung out for a minute taking in the feminine bighorn display but after a few photos, the writer looked up to see the front of the line had moved on. Time to run!

The traverse took us past a few monolith rocks, one of which was well-remembered from three years ago. It could have played the part of the monolith in the beginning of "2001: A Space Odyssey." We tried to sing the music but failed at finding the right key! Sometimes it's the effort that counts! Anyway, we turned our corner somewhere in this area and began our trek back into the direction of our cars.

Another big climb ensued. Beginning in a rocky rock fall type wash, we zigzagged our way up.

The rocky wash turned into a climb on mostly sandstone slab as the slope became more and more gentle. Silica Dome was now behind us and we could also see part of the Painted Pinnacles. Above to our left was Baseline Mesa, a gray limestone topped mesa that covers a large part of this area of the park.

At the top of this fourth high point climb, we stopped for our snack break. The day had warmed up beautifully and everyone was very happy to say good-bye to the cold snap we had just experienced.

The next part of the hike was a relatively gentle down climb through a valley. There is a fun squeeze-play through the rocks here. We complacently lost the original route a couple of times as we were obliged to descend at a couple of challenging places but, for this group, that kind of stuff just increases the fun factor.

In the photo above and below, we see photos of these two route variations. No problem, mon.


Finally, we made our approach to the Sitting Elephant. All agreed that this rock looked more like an elephant than the one next to the highway. And, it gives the pachyderm appearance from almost all sides. There he sits on the near side of a sand dune saddle. After taking our photos, we climbed over the saddle and made a beeline to the cars that we could see 3/4 of a mile away.

The hike is a little over 5 miles with 1300 feet of elevation gain. We completed the hike in 3.5 hours. 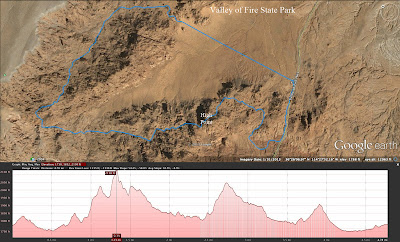 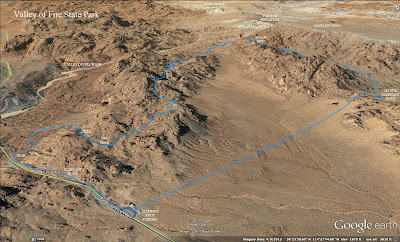 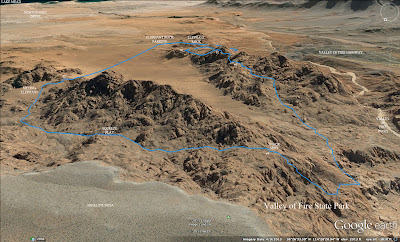