It was a long and wonderful hike today as sixteen hikers went out for an 8.5 mile point-to-point hike to the North Bowl of Fire in the Lake Mead NRA. We drove out Northshore Road, left two cars at the mile marker 18 turnout, then parked at the small parking area,  complete with restroom, at mile marker 20.5. After a long line at the restroom was depleted, we began our hike up the trail. The sign at the trail says it is a quarter mile trail to an overlook, but it became clear that the trail didn't stop when we reached the ridge.


The trail led us along the ridge then down a steep slippery  slope. The day was already warm and layers were shed quickly when we got off of the exposed high point. We dead ended into Callville Road (a high clearance dirt road) and turned left for around a quarter mile until we reached a small wash that turned right leading to a pointy hill as seen in the photo to the right. A left turn led us up and over a red dirt and gray rock slope where we then began a small traverse around that pointy hill to meet the red sandstone that awaited us.


We were already two miles into the hike now, so, a climb up a landmark rock formation was required. We rested here for just a couple of minutes then set out to hike across the desert. There is a lot of cryptobiotic soil in this part of the desert floor so we tried to follow each other's footsteps on a small faint trail. The trail led us to a medium size wash that swirled toward the red rock wall in front of us. Behind the red rock wall was our target, the North Bowl of Fire.


The medium wash fed right into a deep wash between two tall walls. This was the entrance to the North Bowl. We gingerly climbed the rocky wash enjoying some of the scramble that we had come to experience. After around half a mile in distance and 225 feet in elevation gain, we turned left where there is a convenient "rabbit hole" that gains access to the next level. (Note: there is a moderate amount of brush to deal with in the tall entrance wash.)

It took a while for all sixteen of us to get through the small awkward climbing hole but, we eventually found ourselves in a wonderland of red rock formations that were limited only by our imaginations. Granted some of our imaginations were a little more active than others, but, most of us could see the "kissing aliens," "skeleton fingers," and "King Kong face." It didn't take any imagination to pay dues to the little Snow White figurine that still stands in her hidey hole after many years.


The butterflies were very friendly at this level of the North Bowl! One landed on Mary's bladder straw. Perhaps it was sucking a morsel of water from the tip. (See the photo in the collage below.) We climbed up a large crack and tackled the obstacle rock inside. Turning right then left then ... ? ... we kept climbing broken slab sandstone and large open washes until we found the entrance slab climb into the slot that leads out to Raven's Balcony as seen in a photo below.

Everywhere you turned in the North Bowl, there were interesting formations made by wind and water. The slot gently climbed past straw holes in the side of the walls. The slot finished directly on Raven's Balcony where we had finally arrived for our long break. Raven's Balcony was situated on the cliff that we could see to our left as we approached the red rock area below. Around the corner, there is an area to snuggle in and is used for when the wind is too cold and blustery on the cliff. (It is nicknamed the "Piano Bar.") But, today, the weather was absolutely perfect and we sat on cliff's edge.

Upon arriving on Raven's Balcony, our first order of business was to examine the V-cuts in the side of the cliff. These V-cuts that we had noted from the medium wash outside the bowl, formed a window from the top of the cliff to hundreds of feet below. As we sat eating our snacks, several ravens flew at our level around us. A couple of times, we thought we might have to "clear for landing!" Perhaps there was a nest somewhere. (A small portion of Lake Mead could be seen from here, as well.)

After the break, we exited Raven's Balcony through the same slot. But, after our down climb off of the slab, we headed west to descend through a large wash. Although the wash ended in an non-negotiable dry fall, there was a choice of a small "up and around" or one that was a bit further up. The photo to the left shows the one further up. This area was very colorful! From here, we descended through a small wash past the mannequin formation, then turned down a large wash next to "the wall." Chuck repaid the friendliness of a butterfly when he saved it from certain death on the surface of a lone tinaja in a small wash.

At the bottom of this wash, we turned left into smaller washes until, finally, we had exited the red rock area. By hiking overland here, we skipped a lot of the squirminess of the wash in front of us. Then, we dropped back into that same wash. Finally hitting Callville Road again, we turned right. Reaching a very large open road area, we could see the cars almost a mile ahead through the desert terrain at mile marker 18. All hikers decided to "leave it on the trail" as we hiked top speed to the barn! Totals for the day: 8.5 miles; 1117 feet ascent; 1609 feet descent; 6.5 hours. 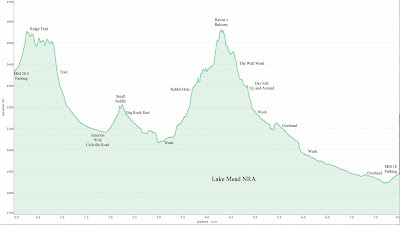 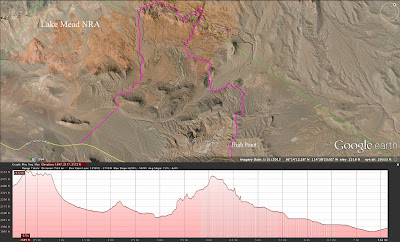 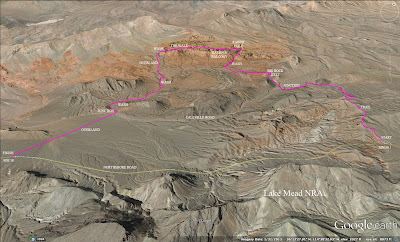 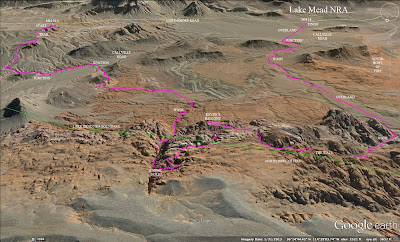 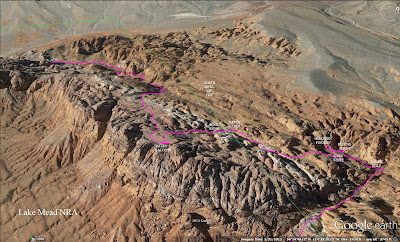 Posted by Las Vegas Cockapoo at 9:06 AM