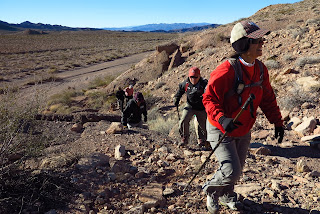 Due to the other hike to China Ranch Date Farm today, there were only eleven hikers on today's scramble in the South Bowl of Fire. Nevertheless, we had a wonderful time with Chuck and Joan playing hosts. We drove out to the Lake Mead NRA on Northshore Road at mile marker 18 and set out to hike around the southern end of a small ridge that lies west of the highway. This brought us to Calville Road, a dirt road, where we crossed it and climbed a small hill.

The morning air was cool and, with the north wind chiming in, we were in a hurry to warm up. 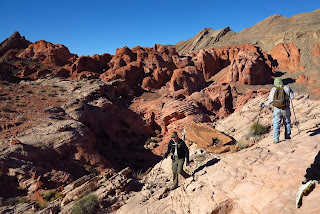 Crossing over a bit of rocky desert terrain, we came to a whole bunch of red rock sandstone - the South Bowl of Fire. We dropped down, out of the wind, into the red rock wash and turned left, scrambling on red, white, orange and pink rock. The views around us were absolutely beautiful. The first singular point of interest was "Sweetheart Rock." First, Ron and Sandy got their photo made in the heart shaped window. Next, Chuck and Joan got there photo made. Alas, when the writer's camera could finally take a turn, Don got down to the ground for his portrait in the heart!

Rounding the corner to the left, we got a quick view of Lake Mead in the distance. We were standing at the top of a wash valley we will be using on another hike soon. The next part of our route today was a little reconnaissance for that upcoming hike. 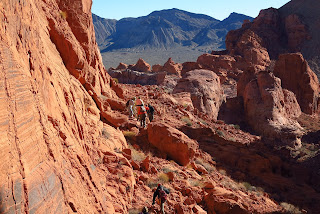 Exploring along the bottom of a cliff area, we noted a few different ways to climb up to the upper level. None of the ways we found today were better than the originally planned crack climb. But, we had fun searching anyway. So, then, we balanced around a high rock wall (seen to the left) and descended into a desert area. The easy rocky desert terrain brought us over to a red rock wall filled with holes. We circled around the swiss cheese wall and came to a large rock mound that looks exactly like a dog!

The pace today was fast, however, there were many stops for water and catching up. 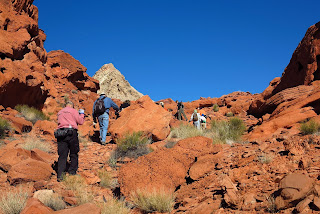 After "Dog Rock," we hiked up on a hill and the front hikers caught a glimpse of bighorns dancing across the red rock. They said it was so graceful! When we hiked just a little further, we were honored to see the bighorns again. This time, all of us watched as they slowly but deliberately trotted away from our position. Soon, they were gone. So, we continued on our way to the snack spot around the corner underneath the largest arch in this part of the bowl called Elephant Arch.

Elephant Arch, seen in the collage below, looks fragile but has no cracks to threaten collapse. 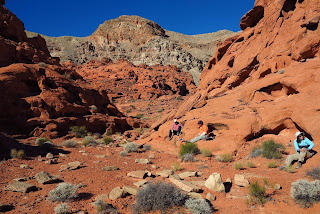 We sat at the arch to have our main break. Above us, we could see Anniversary Narrows Peak and the saddle we use on Lovell Ridge. The wind had died down and we were on the verge of actually being too warm. Gorgeous day!

Next, we continued down the wash and found a couple of fun chutes to down climb. Several of the hikers took a slightly easier optional route.

Sometimes even a short descent can be a bit awkward, as seen in the photo above. 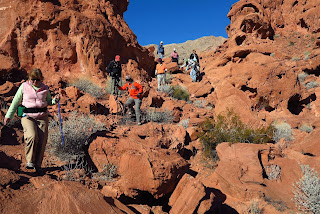 On our way to the exit of the bowl, we utilized a large wash that emptied into a larger main wash. The main wash led out to Calville Road. A trail took us up to the left before we reached the dirt road and this trail took us all the way around the north of the small ridge and back to the cars. Our fun scramble in the beautiful red bowl took 5.5 hours. There were 5.3 miles with 1300 feet of elevation gain. 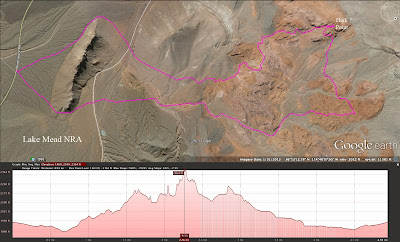 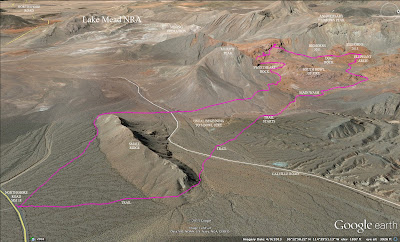 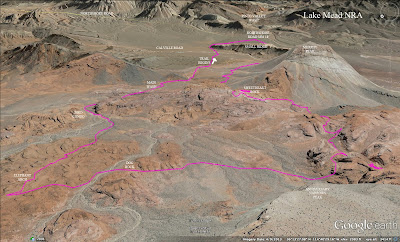 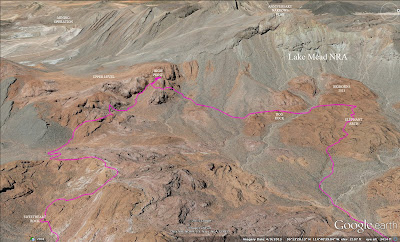