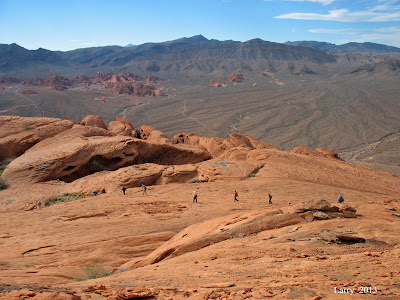 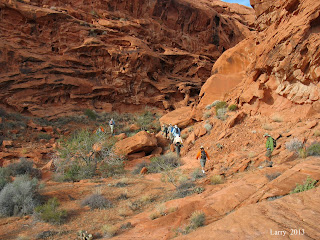 The Super Tuesday Hike today was located in Valley of Fire State Park of Nevada. A short 1.5 hour drive up I-15 and out Exit 75 brings you to the park entrance to a wonderland of color and fun. Our resident Valley of Fire hiking expert is Brian Dodd. His explorations of the park have brought this club many fun hikes and scrambles in the colorful sandstone. 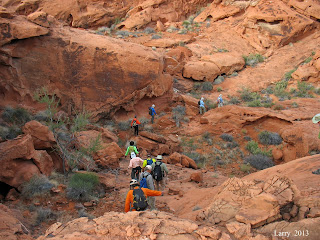 Today was no different as a few of the hikers checked in with the writer. Mike OC brings us the narration; Larry D. provided the GPS track; and photos were offered by Larry, Jon L. and Mike. Larry came through with many great photos. (So many, that it was difficult to choose which ones to use!) Take it away Mike! 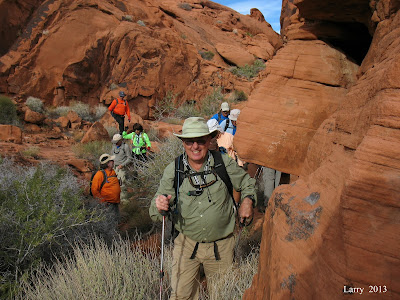 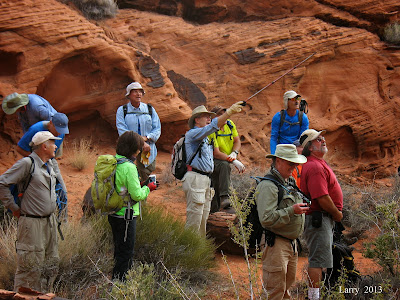 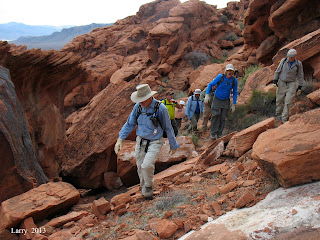 Following whiskey shooters and beer chasers at the Lucky Club Casino😀, a merry troupe of trekkers piled into four vehicles and headed for the Valley of Fire. Destination: Mouse's Tank, then on to the High Point. We were a baker's dozen: Twelve stalwart gentlemen and a lone damsel--Mademoiselle Anne. 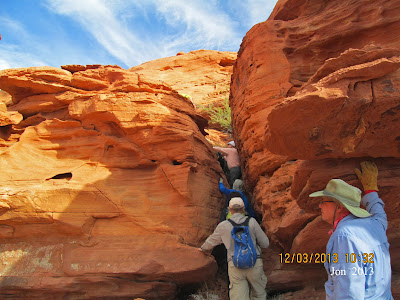 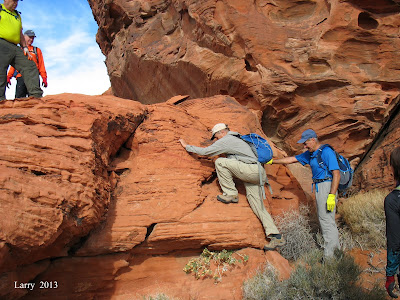 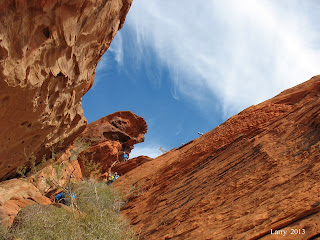 After a tedious hour of negotiating a labyrinth of canyons, it was strongly suggested that hiking sticks be abandoned. Brian Dodd informed us that "The hike starts here. In earnest." Indeed it did, as 13 scampering macaques started up the near-vertical slab. Most scrambles have a crux or difficult section and the High Point didn't disappoint. 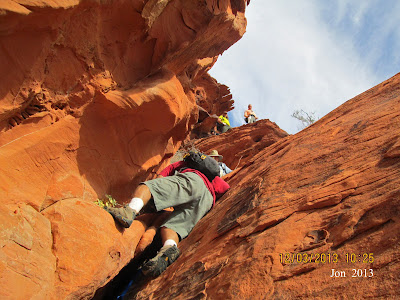 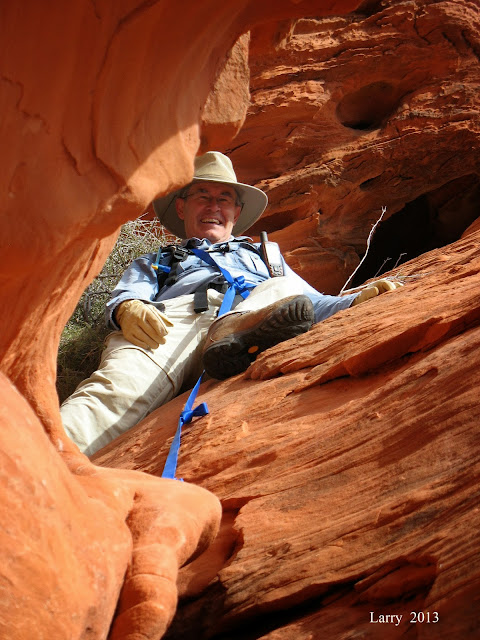 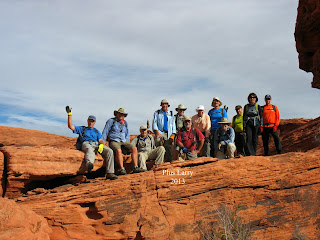 Brian threw out a sling and anchored himself at the crown of a vertical crack, as many ascenders were more than grateful to grab a 'handful of nylon.' For the most part, silence reigned on the challenging climb, save for a few audible grunts and groans. And the occasional "Lubinski bellow.' JonLub is the newly crowned "King of the Mountains." What a man! 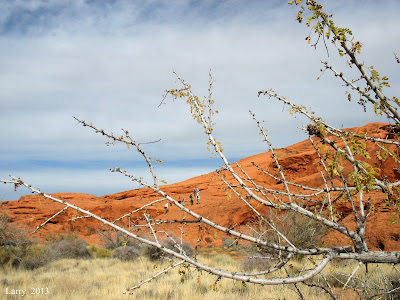 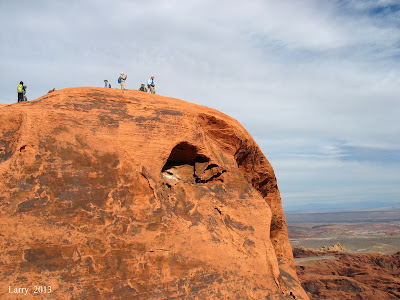 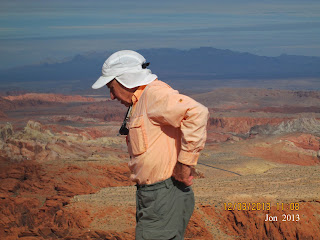 It took Brian three years and numerous attempts to find a route to the Valley of Fire High Point. On a warm December morning, this more-than-capable group of ABFers bagged the summit in 140 minutes. The view from the peak was absolutely stunning: Logandale and Overton were far below us. Gold Butte and a shimmering Lake Mead were a few miles to the east. Lunch with a view. 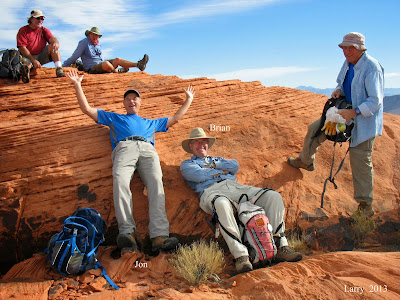 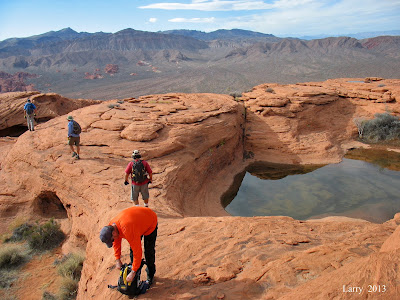 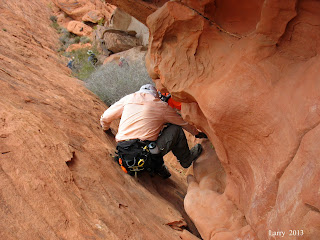 During the descent, loose sandstone resulted in a minor slip and a nasty leg laceration. President Anderson managed to cushion the tumbling hiker and Dr. Dunn was once again called upon to render first aid. Nice job, boys. Ya done good. ~ MOC 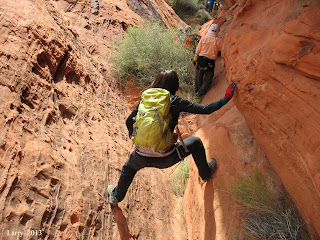 Another wonderful hike in the Valley of Fire State Park. 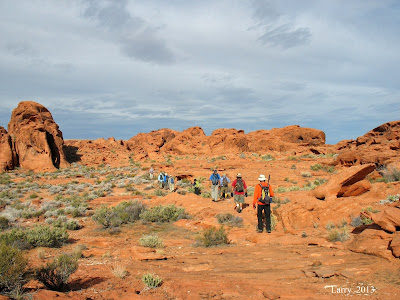 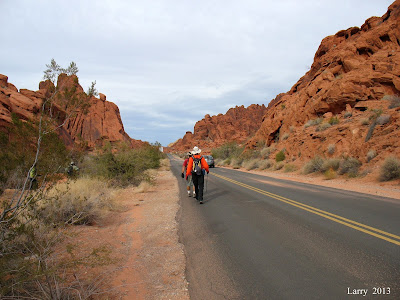 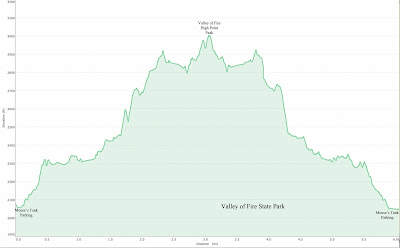 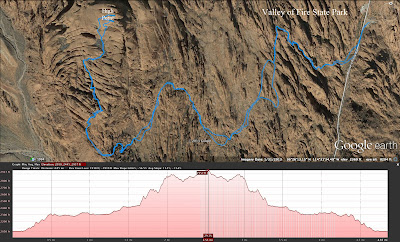 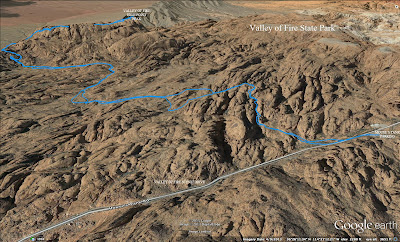 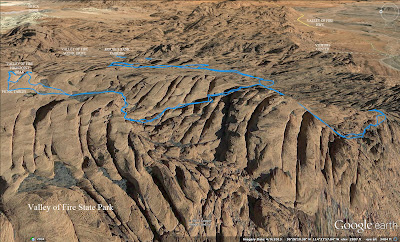