Today's Sunday Super Scramble was an exploration in the Calico Hills. Our intention was to find new routes among the rocks using the least amount of old routing as possible. This much, we certainly accomplished. Put sixteen of our strongest hikers together and out comes a wonderful "gee whiz" type of incomparable hike/scramble. The only disappointment was that we learned at every corner that we were not the first at any location!


We started at the Red Springs Picnic Area parking lot in Calico Basin and hiked out the trail that follows the eastern base of the Calico Hills. We passed the climb up to Angel Pass and the next canyon as well. When we reached the part of the trail that descends into Ash Meadows, we spied a trail to the left that only Steve knew existed. We turned onto the small trail and, at that moment, the original route plan was thrown out the window! The trail immediately began a scramble climb up the red rock and sixteen imaginations began to soar!


At several points in the climb, there was a group of leaders and a group of followers and, yet, another group trying to find easier ways to tackle the climb. Sometimes, there were, indeed, easier ways to get where we wanted to go than what the lead group was offering so we all regathered at different points to make sure no one had fallen off the abundant choices of cliffs. As we climbed, New Peak, Calico Peak, Turtlehead Peak and another hiking group on top of Calico Peak watched our progress.


After trying a couple of ways to get to the red Meadow without junctioning with the traverse trail, we finally decided to just climb on up. We found the Traverse Trail not far from the meadow. With a small collective sigh of relief, we continued down to the meadow and looked up. The plan was to get up to the descent trail that takes the hiker to the Calico II turnout, with as straight a shot as possible. Yep, up we went encountering a nice chimney on the way.


Near the trail junction, we could see the Calico II turnout way below our perch. As we stood around wondering about our next move (which was planned to take this trail down), we looked up. There was a hiker, with a bright blue jacket on, climbing a crack that we had never noticed before. The crack appeared to go all the way up to the Calico II Peak area. Hmmm. With a minimal amount of discussion, the plan changed once again. Up we went, into the crack where we knew not what we would encounter. (At this point, two of our hikers bowed out for the day.)


The crack climb turned out to be ... well, doable. It really wasn't bad except for two particular places. The first place, shown in the photo above, required a chimney move up between two boulders. (There was an "easier" ascent place found afterwards to the left.) The second challenge came about twenty feet after that. We had to move to the left side of the crack and climb up a steep slippery sandstone slope. We all managed and finished the climb at a recognizable place just below Calico II Peak at the top of the familiar wash climb that comes up from the main Calico Tank.


Instead of going to the right where it was somewhat familiar, we turned left and followed the openness to a beautiful area that lay about one hundred feet below the peak. Here, there was a rather large tank that was more than half frozen. Mike OC tried his luck walking out onto the ice. This is the tank that is visible from the peak above. Next, we continued just a little further out onto the sandstone and found the "end." The cliff on which we were standing must have been around 4 to 5 hundred feet in height.


Finally, we sat for our long break of the morning. It's probably safe to say that we were all very ready for it! So far, we had scrambled 3 miles. Above us, on one of the area's high points, we saw the blue jacket guy climbing a precarious crack. He made it up there and waved back when we got his attention. All around us, the view was spectacular! We didn't find a log book so perhaps next time, we will put one up there.


Salvaging part of the original plan, Kay (the coordinator du jour) led the guys up to a saddle on the side of the peak above. On the way over to the climb, we encountered a very long tinaja between the sandstone walls. The reflection was fantastic and photos were taken. We climbed up to the left of the pool and continued up and over the familiar saddle. The next question was, "Is there a way to get down to the Calico Tanks Trail from there?"


Once again, we started without knowing the answers. Backtracking is always ... usually ... an option. Down we went. The down climb wasn't too bad until we got to a particularly hairy spot near the bottom. Kay found out that longer arms would have been very useful at that point! At any rate, we all got down and junctioned with the Calico Tanks Trail just below the main tank which was also partially frozen. At this point, the consensus was that the whole group was pretty spent. Time to head home.

Enough of the exploring. We climbed over to the east side of the main tank and headed down to the meadow. After a peek at the neighboring descent canyon, we decided to just continue out the traverse trail and use Doyle's Descent to the Angel Pass slope. Doyle was conveniently available for the lead and we grunted our way down the steep route. At the bottom of the last slope, we were very happy to be on solid ground again. This was an amazing challenge and everyone seemed to be very happy to have been a part of it. 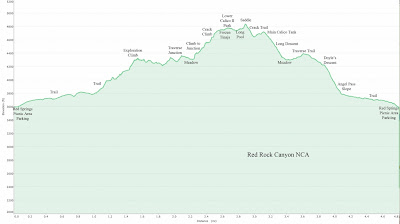 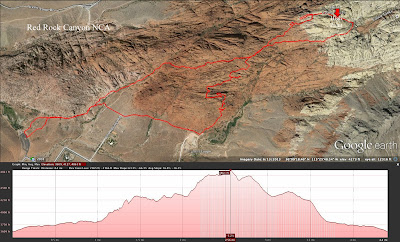 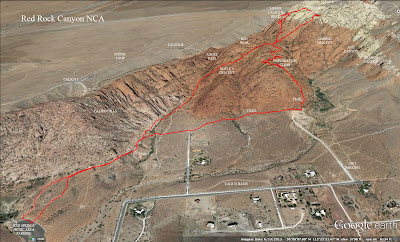 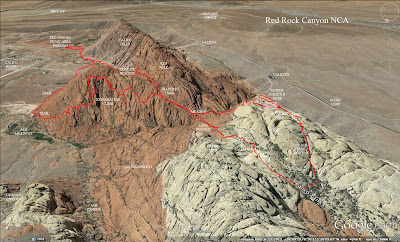 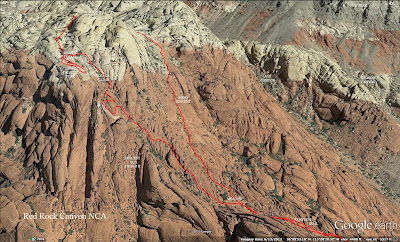