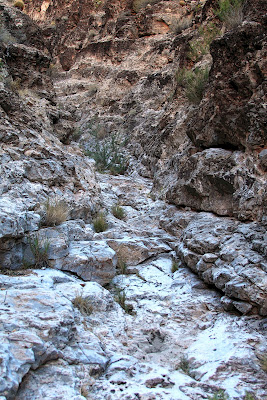 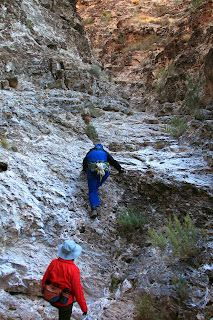 One of the best short scramble hikes around is the Blue Diamond Canyons #2 & #3. At under 3.5 miles with an elevation gain and loss of 900 feet, this scramble offers numerous dry waterfalls of different heights both on the ascent and on the descent. The parking for this hike is located across Highway 159 from the little town of Blue Diamond, Nevada in front of a small utility out- building. Usually we have to crawl through the fence to begin the hike but, today, seventeen hikers were welcomed with an open gate. 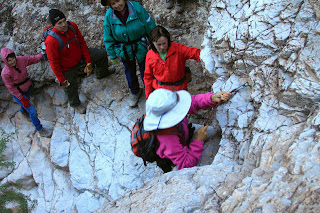 We dropped into Canyon #2 located to the right of the small building and began climbing up through the wash until we found the first of many dry waterfalls. This was just a small one and we scampered up. The next waterfall was a bit more challenging as seen to the right. We were aided with a pile of rocks at the base and a rope at the top ... and, sometimes, a boost on the rump! 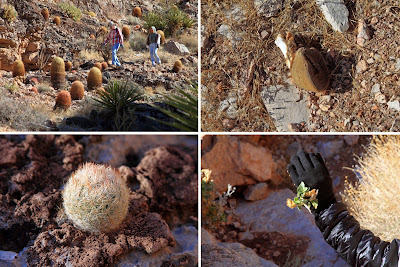 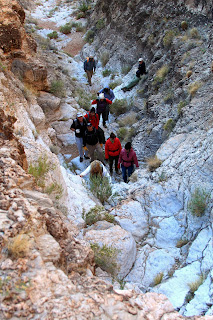 We continued up the canyon facing waterfalls of varying degrees and, on the way, we met a few interesting canyon residents. In the photo above, we see pictured some of the many red barrel cacti, a large pin cusion cactus growing in a rock, an unfortunate burro's hoof and results of the many "velcro plants" that seemed to grow right where we needed to put our hands. "Velcro plant!" was a cry we heard here and there as a warning not to touch. The plant is impossible to remove from clothing until you are able to dry it out with a hair or clothes dryer. Your efforts will be futile until then. 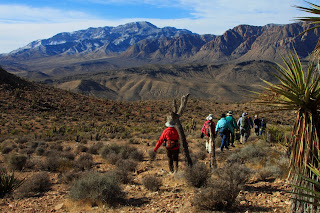 It snowed in the upper elevations of the Spring Mountains yesterday. Mt. Potosi (seen to the right) and the Rainbow and La Madre Wildernesses had been lightly dusted with white powder. As we began our descent into Canyon #3, we had this gorgeous view. 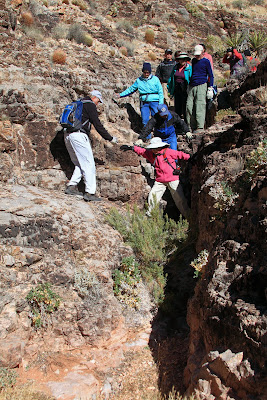 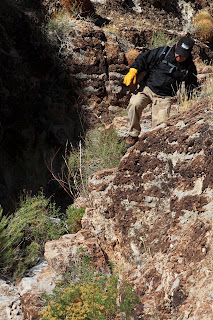 Canyon #3 begins fairly innocuously. The waterfalls were small and there are many side trails to ease the descent on the rocks. However, about mid- way down, we hit two large waterfalls; the second one is around twelve feet in height. This waterfall requires use of a rope if you choose to go down on the right side. The left side is possible to negotiate with a high degree of concentration. Oh yeah, and there IS a trail that passes the whole area up to the right. However, the fun was there at the rope. We decided that slippery grips provided a fun way for husbands and wives to "have a moment" as the wives slipped into their husband's waiting arms ... "Oops!" 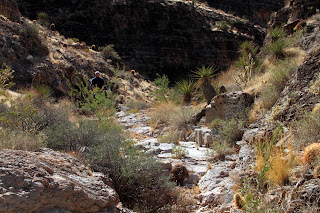 After this, the canyon dropped quickly through a series of falls and slides. The brush is thicker near the bottom and a side trail to the left provides quicker dispatching to the crossover from Canyon #3 to Canyon #2. 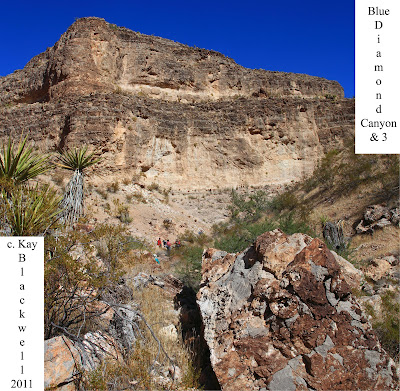 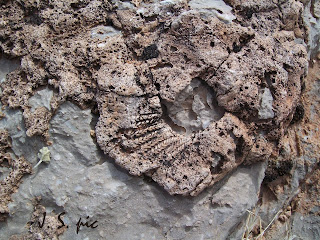 As this entry was being written, a photo was sent to the writer from John S. He found a fossil during his wanderings in the Blue Diamond Canyons, today, that appeared as if it was ancient wheat frozen into the rock. We see fossilized sea life quite often on our hikes but fossilized wheat is worth mentioning! 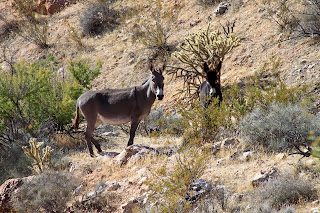 Before we left Canyon #3, we had a close encounter with the burro kind. A light colored female and a black male burro, were foraging in the canyon when the seventeen of us appeared around the corner. They just stood there and watched us until we ventured slowly a little too close for comfort and they nonchalantly strolled up the hill away from us. As we left in our cars, we saw that the rest of the burros were grazing near the highway a couple of hundred feet away. One of the youngest burros stood innocently in the middle of the road. 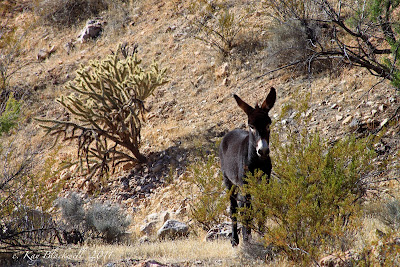 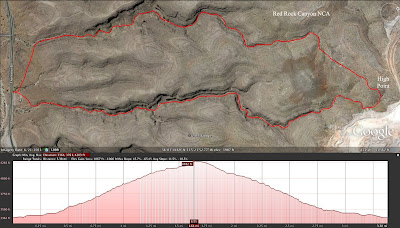 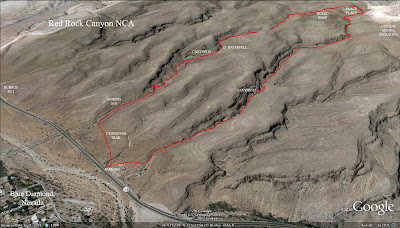