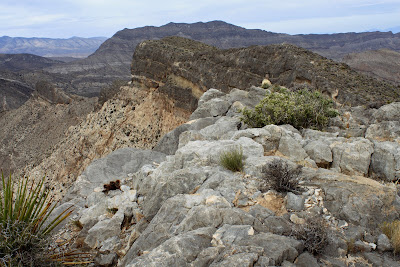 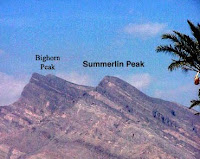 On this Super Duper Sunday, eight of the Around the Bend Friends set off for an epic hike up to Summerlin and Bighorn Peaks from the parking lot found off of Cheyenne Avenue just west of CC-215. These two peaks are seen prominently from almost anywhere on the west side of town, basically from Summerlin. While the picture to the left is a view of the peaks from Summerlin, the photo above is of Bighorn Peak from the ridge approach. 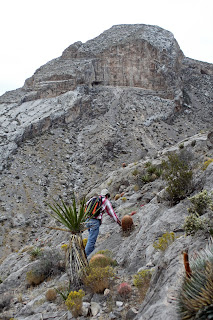 We began our 2400 foot elevation climb from a gravel road that leads to the base of the mountain. The steepness began very quickly as we picked our way up a limestone ridge filled with scrub brush and red barrel cacti. We tried to climb from limestone slab to limestone slab. This rock was very sharp and our hiking boots stuck to it very well eliminating any unplanned falls on the steep terrain. Summerlin Peak was our first target and for most of the first climb, it loomed unreachable on the other side of a steep- walled canyon. 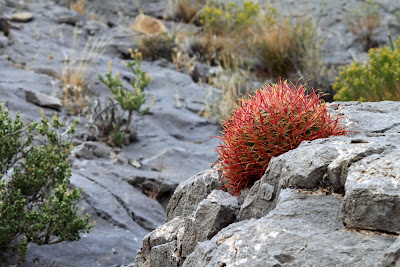 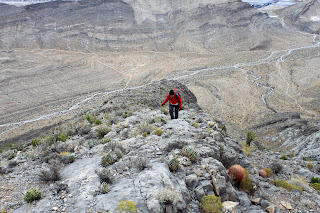 This first climb claimed the first victim. Although indigestion sounds rather innocuous, try climbing 2000 feet in 1.5 miles when you have been so affected. This normally competent hiker retreated back to the cars and then there were seven. Up, up, up we went. Finally, we reached a small rest which the writer called Kay's Peak out of appreciation of the small outcropping. A little more up and we began a traverse around the top of that canyon that lay between the "up" ridge and the summit. 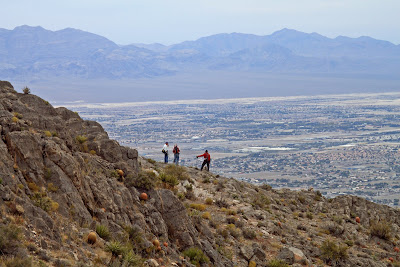 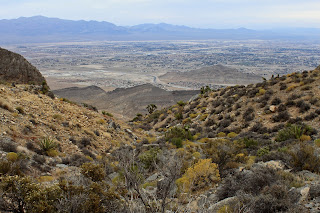 Views of the city were amazing even though the weather was dreary. We decided that it was a decent sacrifice, though, since we were very comfortable temperature- wise. Very little wind with highs in the 50's. Our traverse brought us to the final ridge up to Summerlin Peak. We climbed up and enjoyed a long break on top. Summit photos were taken. 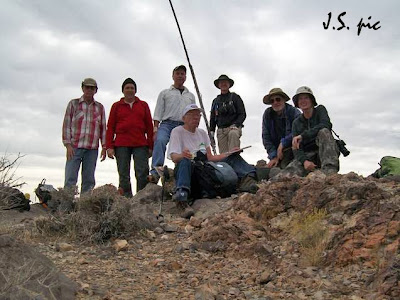 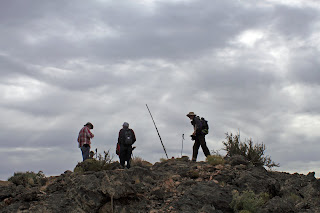 The views around us included all of Las Vegas, Red Rock Canyon NCA, little Red Rock, the Sheep Mountains, the Spring Mountains and the "piece de resistance" Bighorn Peak and its approaching ridge. There it was calling to us and, until then, it was not on the itinerary. Yep! Now it was. How could you resist? 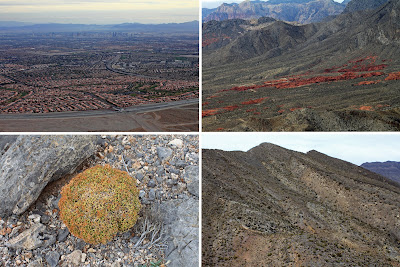 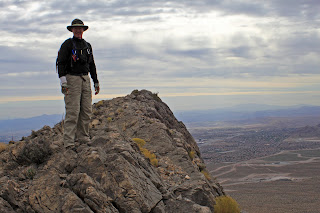 So, after our break, we began a dip down to the approach saddle and made our way up around 300 feet in elevation to reach the opposite ridge. When we got to the top, we quickly realized that we would not be going over the ridge to the other side ... at least, not if we could help it! Yes, it was straight down about 200 feet. Needless to say, we continued our climb along the ridge just slightly away from the top of the knife edge for most of the way. 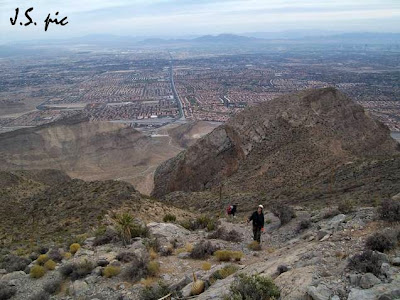 We summitted on an intermediate peak that we dubbed Don's Peak. We had two Don's on this hike and this was where one of them decided to begin his descent. So, now, we had six hikers left. Onward to the next and final peak. This portion of the hike was perhaps the most interesting as we were obliged to walk along the knife edge for part of the way. Again, sticky shoes and good balance made the going safe. 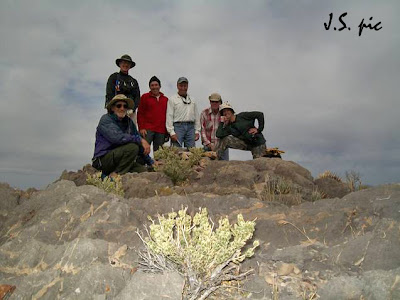 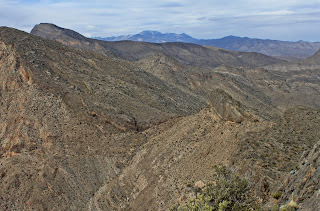 On top of Bighorn Peak, we signed a third log book having to provide our own paper. The tablets inside the metal box were completely and thoroughly wet. Not sure how that happened. From here, we could see Mt. Charleston, covered with snow, along with Mummy Mountain. We began our descent by traversing back over to the ridge that Don went down. At the bottom of this ridge, we reached the point at which the "up" trail and "down" trail met. However, we decided to take a slightly less steep ridge to descend ... SLIGHTLY. 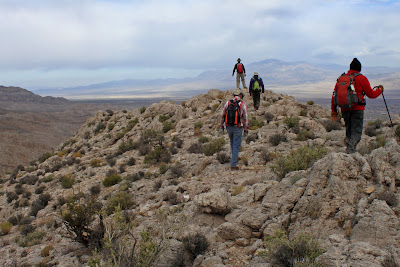 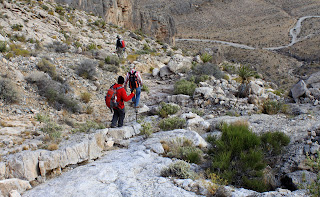 This ridge had lighter colored rock that was not as slabby as the route we came up. However, we made it down to a saddle ... slowly but surely. We took a water break as we pondered the route for the rest of the descent. A steep wash lead down to the bottom, but, was that a cliff near the end? Don't know until you try! So down we went. About half way down, we began seeing cairns that someone had built. With a bit of relief, we followed the cairns down the wash and, eventually, the wash became a slight trail. The photo below, the writer calls her "Happy Photo!" This photo was taken when we reached the bottom of that extremely steep descent. Back to the cars and the epic hike had come to an end. 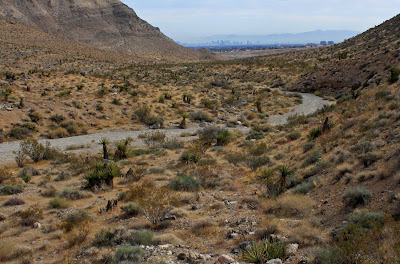 John S. a wrote blog- worthy poem about the day as follows: (He also suggests to read it with the music from "There is a House in New Orleans" in mind.)

There is a mountain in Las Vegas
They call it 'Summerlin Peak'
And it's been wanted to be climbed
By many, I know I'm one.

My daypack is complete
With water and some nuts.
My boots are roughly soled
The better for steep rock.

Now, the only thing a hiker needs
Is a GPS and a walking stick
And the only time that he's satisfied
Is when he's on the top.

Oh, Nature, tell your children
To do what I have done;
Spend your days on high trails and aching muscles
Heading for the risin' sun.

Well, I've got one foot on a rock
the other reaching steeply up,
I'm goin' up to Summerlin
To conquer that peak and view.

Well, there is a mountain in Las Vegas
They call it Summerlin Peak
And it's now been attained by a group;
And me, I'm one of the seven. 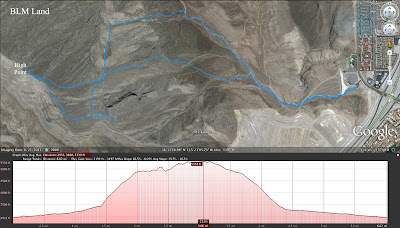 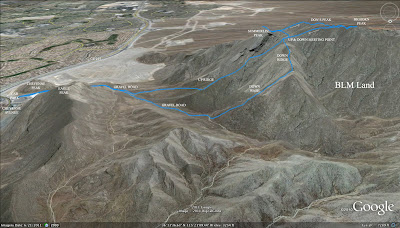 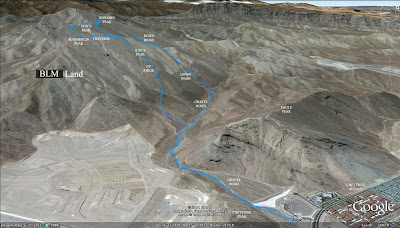 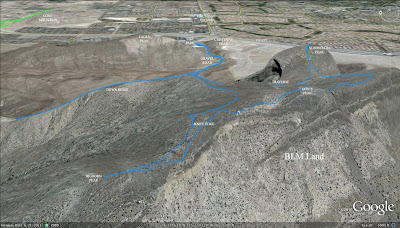 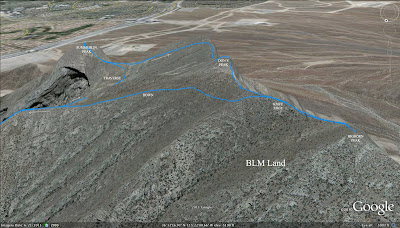 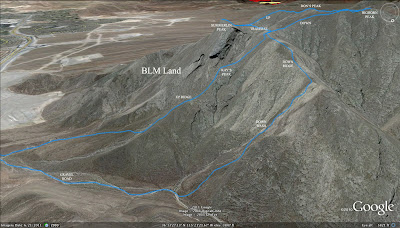