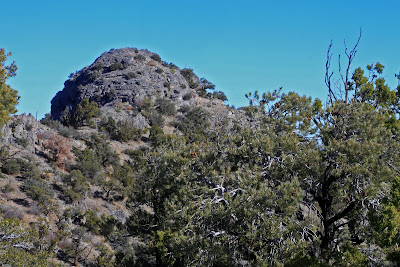 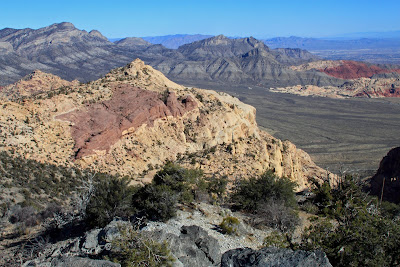 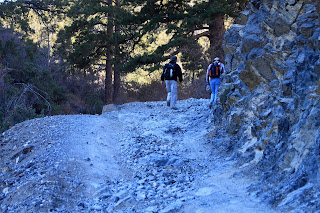 Calling all "hardy" hikers! This eleven mile hike with at least 2700 feet of elevation gain, a long arduous ascent on a dirt road and a very steep descent which lasts longer than one would like is a hike that tests the knees, hips, arms, feet and stamina of even your average strong hiker. It is a hike that fifteen hikers conquered today beginning in the early hours at Willow Springs Picnic Area parking off of the Scenic Loop at Red Rock Canyon NCA. We watched the sun hit the mountains in front of us as we hiked Rocky Gap Road in the shade for half of the way. The last half of the 4.6 miles up to Red Rock Summit were in the sun but we were all very comfortable as we had dressed for the warmer temperatures that were expected during the day. 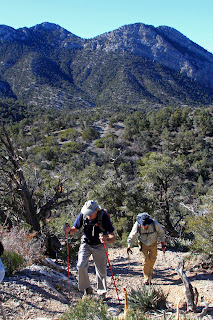 We stayed together throughout the hike even though a bit strung out and at the North Peak (Limestone) trailhead, we gathered again for the last climb up to the peak. We were taking no prisoners as the saying goes. There were not many stops on the way but the "hardy" hikers of Around the Bend Friends persevered and again the party of fifteen became slightly separated. No worries. We gathered again at the peak for our official snack break. So far, the hike seemed like a regular climb that many of us had done before. Now, things got interesting! 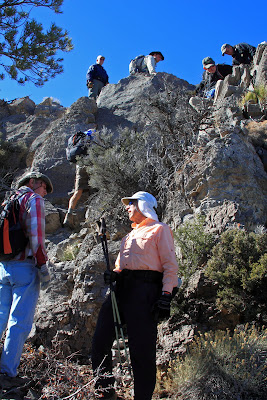 Short scramble off of the limestone peak to begin the ridge trail hike. 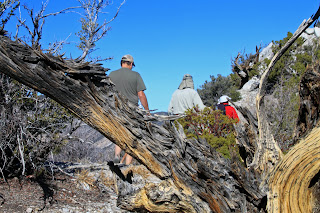 We chose to step off the edge of the high peak and meet the trail that would take us to North Peak (Sand- stone). After a little more steep descent, we settled into a rolling descent on the crest of the ridge that separates the two North Peaks. Views on both sides of us were never ending. We were very high above the Red Rock escarpment. 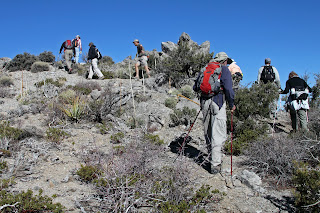 The limestone crags and outcrop- pings along the ridge showed us the way. The entire ridge trail was among the limestone and we only found the sandstone when we made our approach to Dragon Rock, a rock in the shape of a dragon's head ... with a little imagination. Passing another hiking group and a lone hiker who we knew, we made our way quickly over to the peak. This required stepping from sandstone rock to sandstone rock and up to a slanted seating area which easily accommodated our large group. Here, we took another break before the descent began. 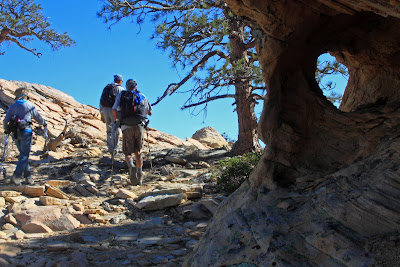 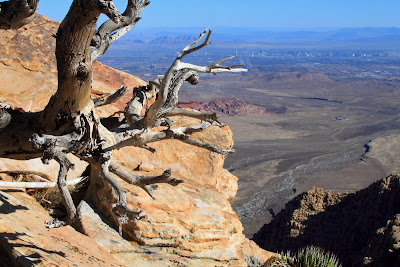 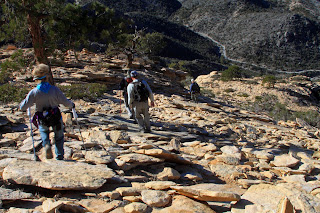 Next came the descent back down to Rocky Gap Road ... definitely the most difficult section of the hike. First, we hiked back over the approach to connect with the sandstone slab which leads down a ridge and connects, in turn, with a small trail in limestone forest land covered with the regular junipers and pinion pines with a yucca here and there. The sandstone slab was extremely steep and our concentration was awakened in full gear. 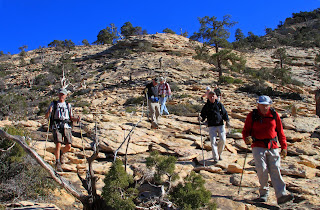 After we reached the limestone portion of the descent trail, our concen- tration had to step it up another notch as this was very slippery with loose rock and not much to hold onto. There were at least five falls on this part of the hike. None were serious; simply part of the sport. Nevertheless, sore butts ensued and, finally, we reached the dirt road 2.5 miles up from the cars. 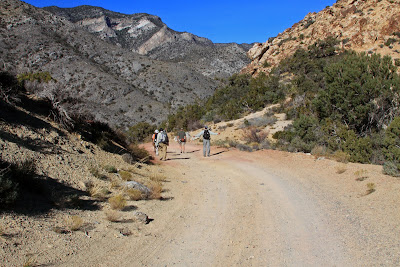 We hiked the road as quickly as our legs would take us and took inventory of our sore muscles. 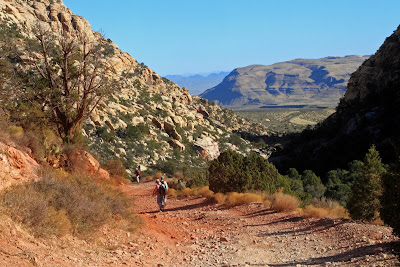 At almost 2pm, the sun was already showing us evening light on the White Rock Hills. The hike took six hours. 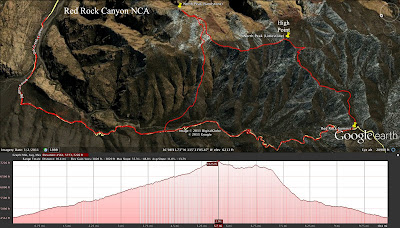 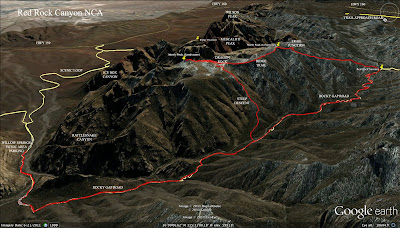 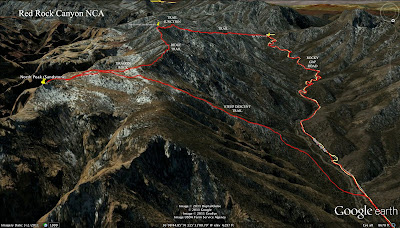