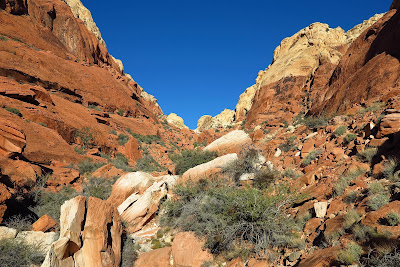 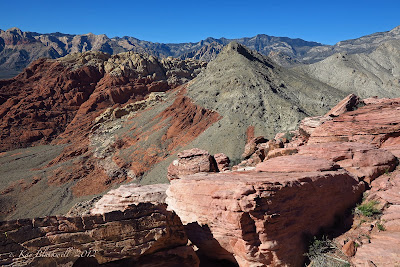 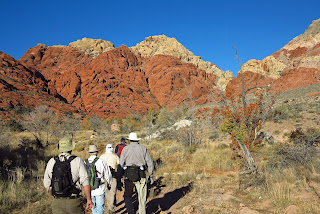 Today's Super Tuesday Hike was two Super Scrambles with a little necessary hiking in between. Thirteen members of the Around the Bend Friends embarked on a morning including an Ash Canyon ascent and a Krafft Mountain west to east traverse. This was a new loop for our club having been scouted out by four of our hikers five days before. We started out at the dirt parking lot in Calico Basin near the base of Krafft Mountain and headed toward Ash Meadows. 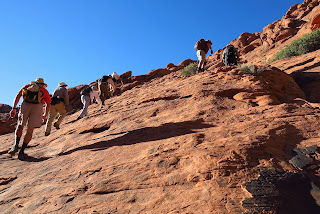 Through the meadows, we entered Ash Canyon and made an almost immediate climb up the sandstone slab to our left as seen in the photo to the right. Once we were at the top of the slab where it met the wall, we turned up canyon and used the slab for much of the climb while scrambling over intermittent boulders and such. 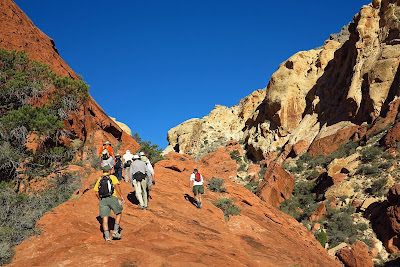 Hiking Up the Left Side of Ash Canyon 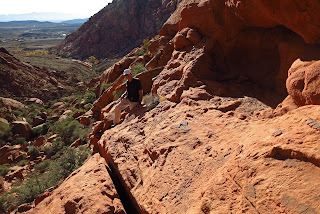 As the sandstone turned into a wall, we dropped into the wash and began climbing the white sandstone up to the middle overlook. The group was pretty spread out by this time and we all waited here for the last ones to come into view from below. 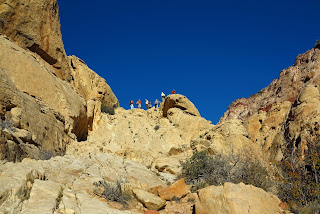 The view from this overlook was beautiful today. The skies were clear and the air was fresh with a cool breeze through an otherwise sun-warmed canyon. When we turned to continue up canyon, we found the trail that runs between the middle overlook and the upper overlook. 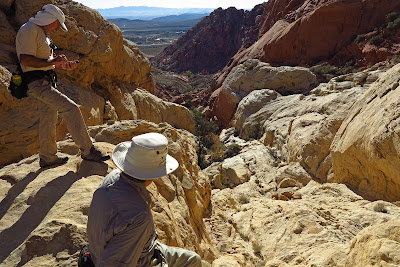 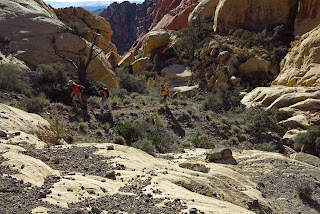 We took this trail until there was an inviting drop into the wash. We chose the middle route up the wash and scrambled up to the top of the canyon. Finally at the very top of Ash Canyon, we gathered the group together and were given our next instructions by today's coordinator, Mike OC. 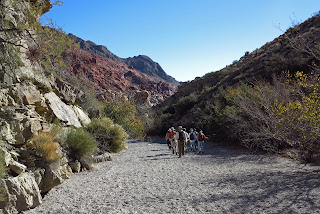 As we have done so many times before, we turned down into the connector wash (Crossover Canyon) that takes us to Gateway Canyon. We dropped into Gateway, hiked a little ways down through the gravel then turned to our right to go up the trail to the Krafft Mountain Saddle for our lunch break. 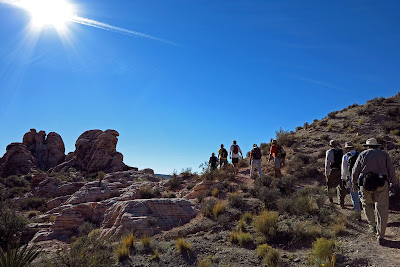 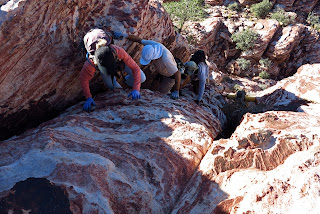 We sat for several minutes on the saddle then began eyeing Krafft Mountain which rose to the east of us. The mountain is not large but it is virtually covered with scrambling opportunities. This would be the "new" part of the hike. We would traverse this long calico colored mountain from the west side to the east side. 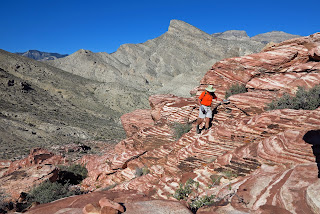 Immediately, we began the first of several steep short climbs up the sandstone that grabbed the soles of our hiking boots. The surface of sandstone in Red Rock Canyon NCA is very porous and lends many hand holds and foot holds. The hiking and scrambling in Red Rock is top shelf fun and relatively safe with the correct footwear, if you pay attention to your movements. 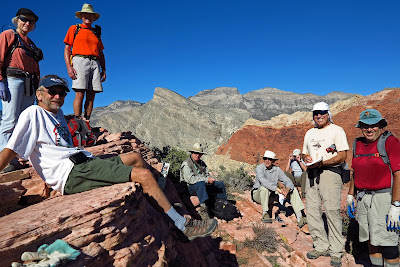 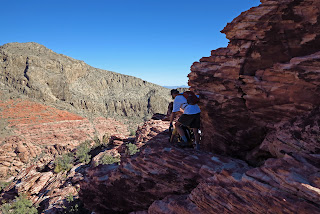 We reached the highest peak of Krafft Mountain after going up then down then up again. We signed the book, took a water break then began our traverse over to the secondary peak. This required dipping down and going back up while negotiating some of the most exciting scrambling of the day. 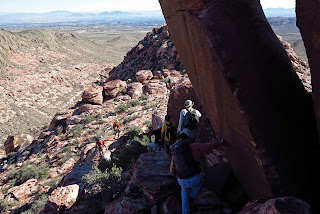 On top of the Krafft Mountain ridge, there were many humongous sandstone boulders that we had to go around and in between. Sometimes we were high above the ground as we leaped from one rock to another. But, the landings were solid and the safety factor just made this part of the hike even more fun. 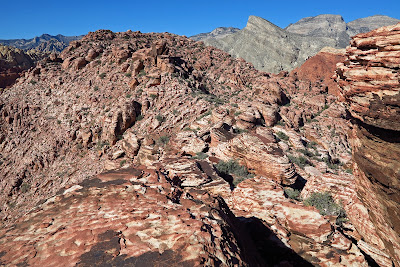 View From East to West Over Krafft Mountain 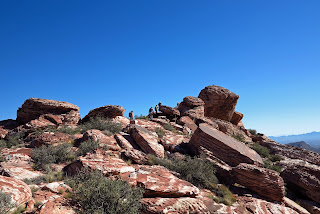 After we dipped down a little just one more time, we made the last huge boulder scramble up to Krafft Mountain's secondary peak. Or, rather, we perched on a large boulder that viewed the large boulder that provided the highest point of the eastern side of the mountain. We considered a venturous climb up that high boulder. Up would be easier. But, after learning from our many combined years of experience, down would be a ... hmmm ... well, it would be much more difficult. 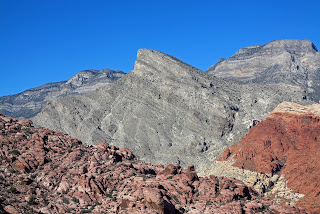 Our views of the surrounding area were magnificent. And, lest you think that the writer may be exaggerating, take a look at the view of Turtlehead to the right. (And, that's only the beginning!)

Mike OC took the group photo below. We're all there except for Chris D. and, of course, Mike. Then we reluctantly got up and began the big descent. 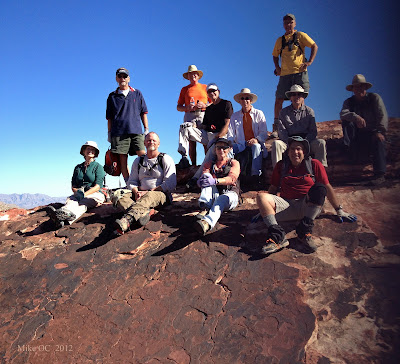 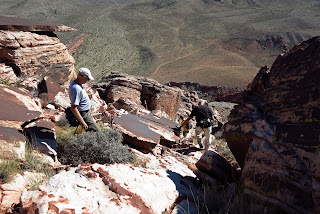 The east side descent doesn't appear to be too steep from the bottom. We have passed this area many times at the base of the mountain and looked up. However, (as we said before) "down" is never as easy as up and down we went. From the top of the descent, the mountain appeared to just disappear after a certain level of sandstone. Cliffs, I suppose. 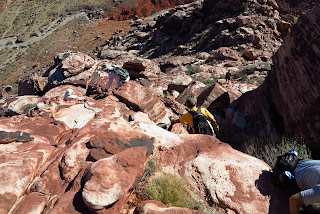 Paul led us on the east northeast side of the mountain down through some pretty hairy stuff. One by one, we carefully checked and rechecked our footsteps. Never feeling unsafe, (well, once) we clung to the rocks and managed to find the way down to the Krafft Mountain Loop Trail below. From there, it was a simple hike out to the cars. 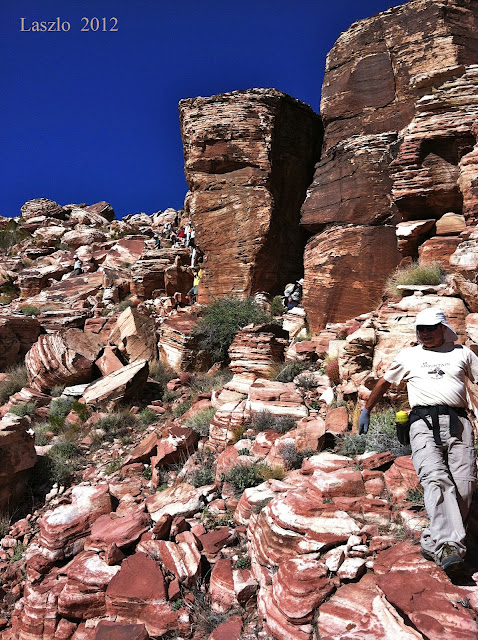 Watching the East Side Descent From Below 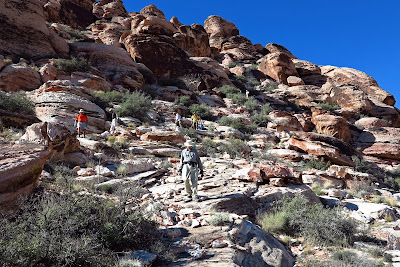 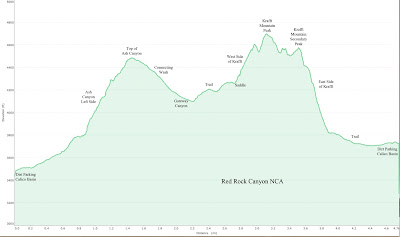 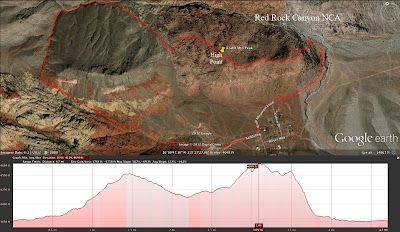 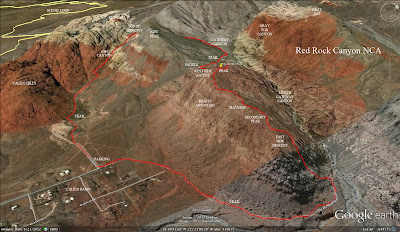 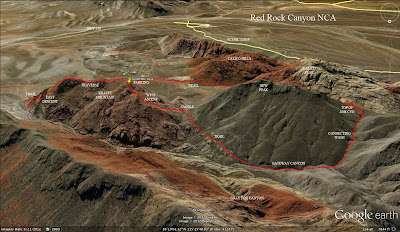 Kay, I think that the "no name" valley/wash from the top of Ash Canyon down to Gateway Canyon is called Crossover Canyon.

Great photos...great write up...great scramble! Thanks for your post.
...Larry