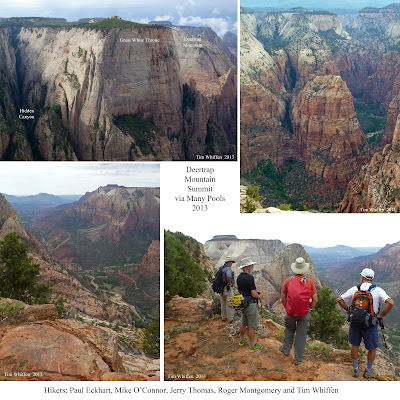 The writer hopes that the many photos used for this entry enlighten anyone who wishes to do this hike in the future. 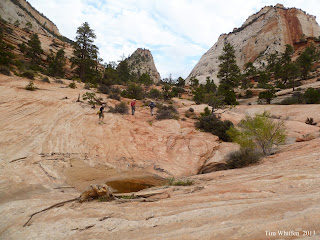 Every once in a while, members of the AtBF hiking club prove that it can be done! This particular hike is one of those that other hikers tilt their head at and say, "Well, I didn't know that could be done!" Even though, we knew that it HAD been done before and we thought we could do it, too. Under the expert direction of Paul Eckhart, five hikers set out from the Many Pools parking turnout on the east side of Zion National Park and dropped into Many Pools Canyon. Eleven miles later, they will have accomplished an out and back hike to Deertrap Mountain via the Many Pools Trail.


The climb up Many Pools Trail was relatively easy with its beautiful undulating red sandstone. Above, the white sandstone mountains finished the backdrop. The end of the trail came too soon and the ugly wash lay before them. 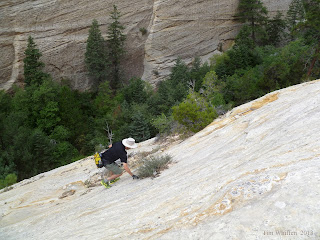 Upon reaching the end of the Many Pools Trail, the hikers eyed the sandstone slope up to the right of the messy wash ahead. A detour up the sandstone was tried but it soon cliffed out. Back in the wash, they realized that the brush would have to be dealt with. Therefore, a half mile of brush, rocks, fallen trees and short steep climbs ensued. Still, the advanced hikers were not faced with anything that they had not handled before ... maybe not all at the same time .... So, up they went taking the climb one challenge at a time.


Off and on, there was somewhat of a trail that could be deciphered. Not much attention was paid to the slight path because it was really a matter of where it was possible to climb up to the next level. 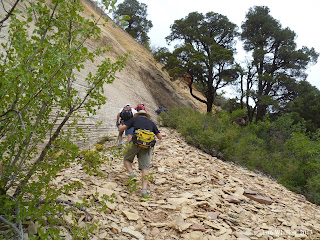 Nearing the rim, a lot of scree covered the trail. A lot of time had passed since the five hikers had left the comfort of Many Pools Trail. It was definitely time for some relief! So, up and over the rim, they hiked. Not far from the lip of the rim, they found the Deertrap Mountain Trail running by. Joy! Following the trail across the flat, burned out, plateau was a breeze. It was here that rain began a series of stops and starts. It was welcomed ... just not the couple of thunder rumbles heard in the distance. 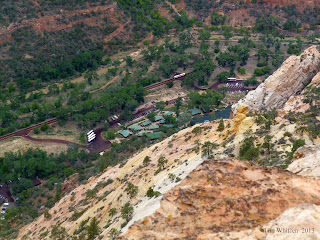 The hikers had to follow the trail up the steady slope of the plateau then down, up and down to crossover onto the Deertrap Mountain overlook area. Below, the hikers could see the Zion Lodge. Across the canyon, they saw the alcove that holds the Emerald Pools. Angel's Landing was in clear view up canyon and there was a gorgeous view down canyon as well. While they hiked the overlook area, they spotted a herd of desert bighorns hanging by their hoof toes on the steep white sandstone of a nearby peak. It was a ram and six females.


The break at the scenic overlook was well deserved. There was not a log book but there should have been. 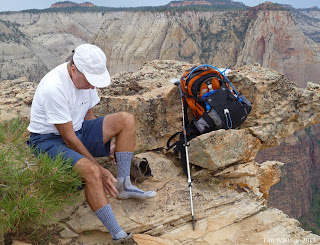 When the hikers started back down from the overlook, there was some discussion as to whether they wanted to continue down to the East Rim Trail and Echo Canyon or go back the way they came via Many Pools Trail. The climb up the steep wash had taken its toll and the hikers voted to go back down the steep wash. The other way would be quite a bit longer in mileage. It goes to figure that the wash must not have been so challenging that they never wanted to see it again!


So, down over the rim, they went. Gravity was now on their side. Caution was the name of the game. 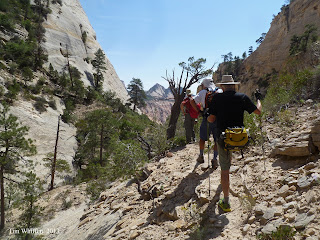 Finally out of the wash, the Many Pools portion of the hike was now the "cool down." The sky had cleared and the views were much more cheery but the heat had returned. The choice to return the short way was the right decision. Coming out on Highway 9, the cars passing by had no idea that the Around the Bend Friends had just proven that IT CAN BE DONE!


The writer would like to thank Tim and Jerry for the wonderful photos that spoke for the hike. The GPS track was provided by Paul. Thanks bundles! 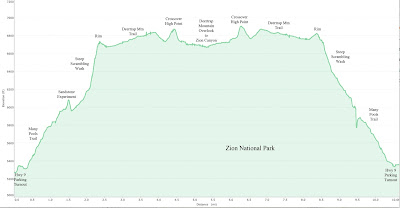 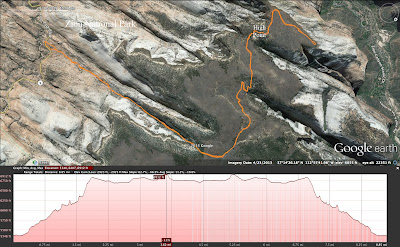 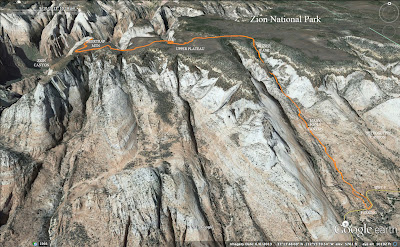 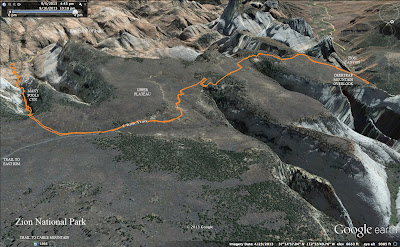 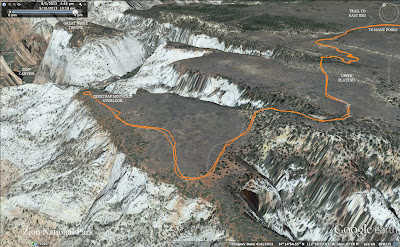