Tuesday, our hikers did a new hike for the club. Again, our Tuesday hikers did us proud! Mike OC writes the blog for us as Laszlo, Richard and Jerry offer the photos. Jerry also provided the GPS track. Thanks, guys, and congratulations! 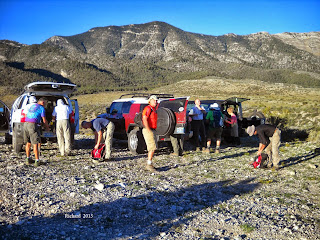 Exiting the vehicles at the trailhead, two massive bull elk darted past, setting the table for our adventure du jour. Majestic creatures. We set out after them, to no avail. We were high above the prisons, just below Cold Creek. On the way to McFarland Peak via the North Ridge Route. With Richard Natale on point.

A good 2% of that figure now stains the Emerald Forest. An additional 2% would be shed over the next seven hours. No exceptions here. You hiked, you bled. End of story. Tim Borem looked like he had been in a bar fight. And lost. (see photo at bottom of entry) 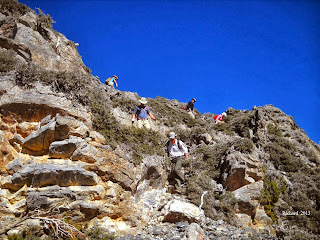 The steep, fast-paced climb was a veritable lung-buster with little respite. A relentless, upward trudge into a blinding sun. Skittish horses scampered away, wary of these alien human intruders. Much later, with the forest far below and no sign of our equine friends, the pinnacle emerged above us. A barren, desolate crag at 10,742 feet above sea level. Lots of ditzy grins, as we all found a seat and rummaged for some nourishment.
Tough part of the hike is over, right? Hah! Fugghedaboutit! 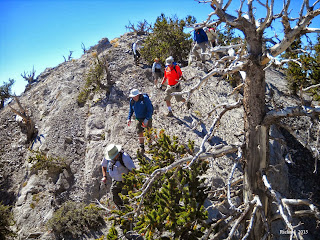 An entirely different descent route proved to be the real monster. Incredibly steep terrain with unstable talus and sharp limestone. Huge boulders cascading down the mountainside. Sounded like the Khumbu Icefall on a bad day. An excruciatingly slow and tedious descent. At one particularly dicey section, Jerry Thomas' GPS registered a mere tenth of a mile gain in thirty minutes. Holy tortoise, Batman! We'll never get back to the Bat Garage at this rate!

Baptism of fire: There was a newbie in our midst on this autumn day: Richard Thompson of Los Alamos, New Mexico. An old friend and former co-worker of the author. Welcome to the Tuesday ABF jaunt, RT.


Toughest hike of the year? Perhaps.
In the top five? For sure. 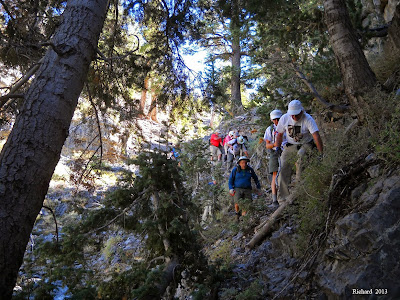 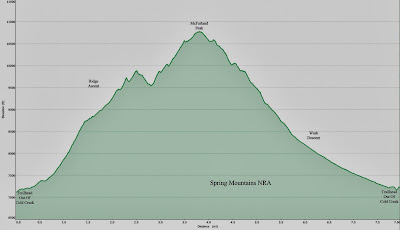 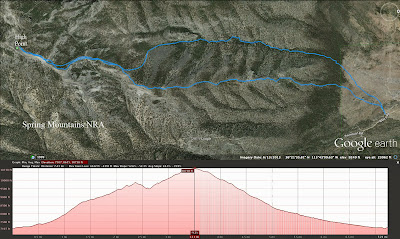 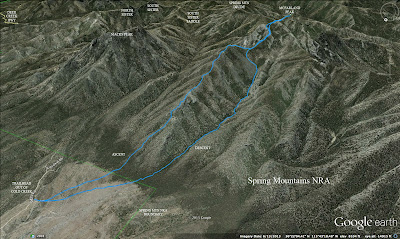