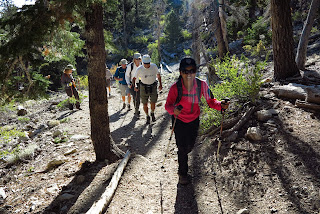 Thirteen hikers drove up to the North Loop trailhead on Deer Creek Highway in the Spring Mountains NRA this morning. Most of the hikers knew the Fletcher Peak hike well but there were two or three newbies so a few of the hikers took turns guiding them up the trail. We started up the North Loop at our own speeds in the pleasantly cool air of the mountains. Our first gathering point would be the North Loop meadow. 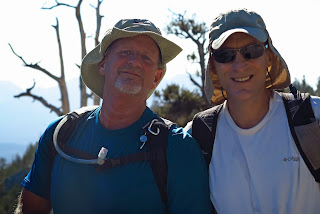 The first hikers to arrive at the meadow had to wait several minutes before the last of the hikers came into view then they took off again. The next part of the hike involved twelve switchbacks that led up to the North Loop High Point on this side of Raintree. Usually, there is a gathering point here, too, however when the writer and her buddies got there, there was no one waiting. 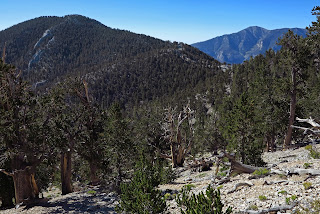 We continued down the trail toward Raintree seeing Fletcher Peak and its ridge in the near distance to our left. As we came upon the Fletcher Trail junction, we found our fellow hikers waiting. Knowing that the slowest group of hikers behind us had a guide with them, we all continued on and dropped down onto the ridge below. This is where the views really appear! 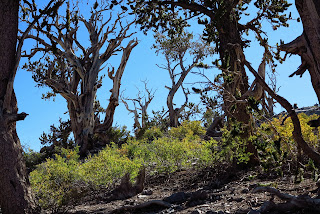 As we climbed up to the peak, we could see Mt. Charleston, Griffith Peak, Mummy's Toe and the large stand of aspens on the North Loop Trail below Mummy Mountain. The aspens were in full color, changing from green to yellow, orange and red. There were also aspens still standing below the South Loop ridge. The Carpenter One fire did not take them all! 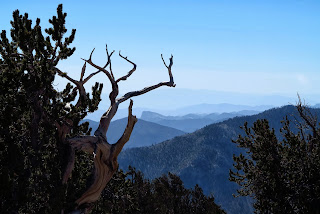 The last climb to the peak took our last energy reserves and we took a small break on top. It was gorgeous up there! On the descent, we broke up into three groups. The first group needed to return to Las Vegas quickly for an appointment. The second group kept a steady but swift pace as they talked there way down without stopping. The last group was delayed with a couple of minor injuries. All returned safely. The hike was 6.5 miles with 2500 feet of total elevation gain. 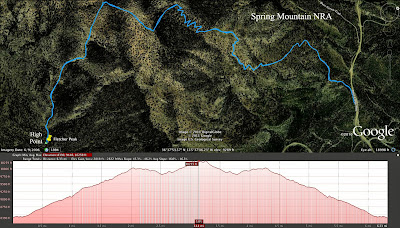 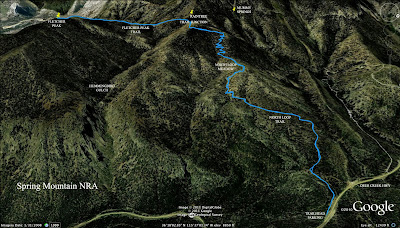